The War on Home Runs 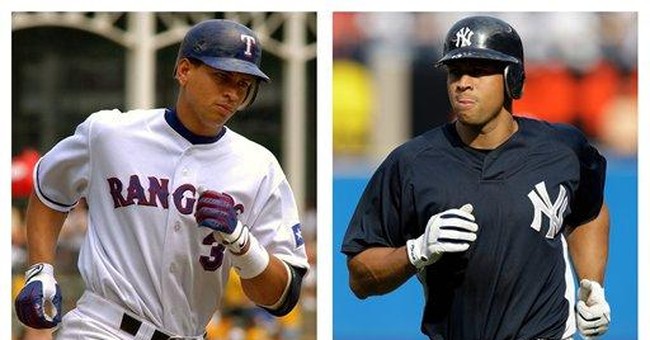 Every time I imagine baseball with more bunts and 1-0 "pitching duels," my blood goes cold. If intolerable tedium interested me, I would have turned my attention to soccer or golf years ago.

Baseball's singular purpose, some seem to have forgotten, is to entertain us. So the moral panic surrounding Alex Rodriguez's use of steroids is unquestionably counterproductive. If an athlete decides to sacrifice his testicles to the gods of baseball, who am I to say no?

Speaking of which, Congress is revving up its un-American war on the home run once again. This week, all-star shortstop Miguel Tejada was charged with lying to Congress about steroids. Surely, all of us can amass a colossal list of issues the nation's top legislative body should probably be tackling before a once-great shortstop.

Now, there is no doubt that the morality and ethics of performance-enhancing drugs need to be debated. But Washington, where players are treated like former members of the Khmer Rouge, is the last place this discussion should be held.

Moreover, baseball just isn't that important. Despite what some fans believe, Fenway Park isn't a sacred temple; baseball records are not registered in the book of Deuteronomy; and Congress is not the Sanhedrin.

They won't even let you put an asterisk next to "Thou shalt have no other gods before me." I checked.

Right now, a doctor somewhere in this country is prescribing steroids for an ailment. The uses of enhancers are far more complex than your run-of-the-mill didactic senator would have you believe. And if these drugs have the ability to help an athlete recover from an injury faster -- often the stated purpose of professional athletes -- why would Major League Baseball ban their usage outright?

If these drugs can help professional athletes remain more durable, build strength, and enjoy longer careers with negligible health risks, why treat the drugs like crack? And if all drugs in sports are evil, why are shots of cortisone handed out like resin bags?

Despite the overwrought coverage of this issue, there is a dearth of information, outside the anecdotal, about the long-term consequences of performance-enhancing drugs.

With all that said, those who used enhancers after 2002 were, without argument, a bunch of cheaters. This kind of behavior is supposedly illegal in Major League Baseball. ("Supposedly," because baseball easily could put an end to the problem today by instituting a real test attached to real consequences.) A league has the right to define the parameters of competition.

Who knows how many players were doping? For many, it is the difference between a pedestrian salary and an all-star check, a place in the majors or a life in the minors, retirement or another record broken. The incentive is too high, and the penalty is too feeble.

But let's not forget that we're hypocrites, as well. How many fans who marveled at Mark McGwire, despite his progressively Lou Ferrigno-ish appearance, are feigning outrage now?

It's the Sosas, the Bondses, the Giambis we paid to see. Few fans are interested in plucking down hard-earned cash for a .250 hitter with 15 homers, even if he has that go-get-'em attitude.

Americans love their home runs, always have. So though you hate the sinner, do not hate the sin. A home run, after all, is a noble feat.