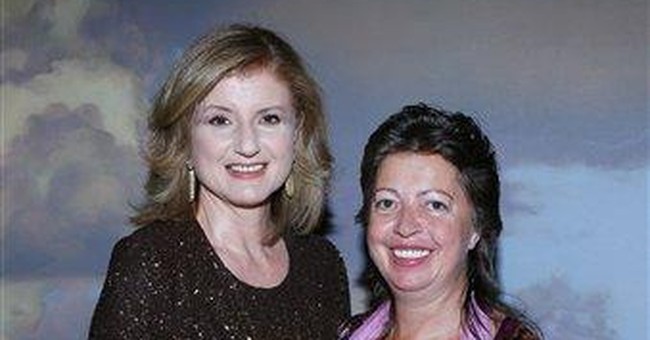 Sure, one of these philosophies spurred the murder and misery of hundreds of millions worldwide; the other promotes liberty, innovation and welcomes foreigners to lounge around in expansive mansions paid for by their former oil baron husbands.

So we can agree; there is no such thing as a flawless ideology.

Yet this serious, but temporary, recession -- and we've had at least four of them since 1980 -- is, evidently, the ironclad justification "to drive the final nail into the coffin of laissez-faire capitalism by treating it like the discredited ideology it inarguably is."

When a pundit informs you that a point is "inarguable," one instantaneously recognizes that the point is, in fact, remarkably arguable. Hordes of economists quarrel about this very idea each and every day. So the disaster narrative offered by Huffington and fellow panic-mongers, you can imagine, is riddled with underlying problems.

When Huffington claims that capitalism, which allegedly is on a spree of uninhibited destruction, is at fault for our troubles, she ignores half the story. We are not recession-proof. But what is one to make of the colossal economic expansions we enjoy between intermittent contractions? Doesn't logic dictate that our brand of feral free market is also responsible for the prosperity that precedes a recession?

And when Huffington flings about the phrase "laissez-faire capitalism," what she really means is plain old capitalism. None of us, after all, lives under anything that even tenuously resembles "laissez-faire" capitalism.

Actually, we're working our way in the opposite direction. The Federal Register, a list of regulations, reached an all-time high of nearly 79,000 regulations, up from nearly 64,000 in 2001. New regulations have mounted rather than diminished under the Bush administration.

Veronique de Rugy, a senior research fellow at the Mercatus Center at George Mason University, has studied regulatory spending and effectively squashed the "deregulation" mythology that is peddled extensively these days.

De Rugy also points out that, adjusted for inflation, regulatory spending under the category of finance and banking were cut by 3 percent during the Bill Clinton years and rose 29 percent under the imagined Bush deregulation binge.

Clinton and Wild West capitalism. Where are all the tributes to the laissez-faire economic boom of 1991-2000?

Instead, the far left has taken up concerted scare-mongering -- much like what they accuse the right of employing after 9/11 -- to transform a short-term economic crisis into a radical long-term foundational alteration of our economy.

This means ignoring every government intervention that helped cause this recession, from Fannie Mae and Freddie Mac's monopolizing of the subprime mortgage market to the Federal Reserve-created bubbles to regulations that generate moral hazard.

The solution (you won't be surprised): massive bailouts of rotting companies and unions and a new New Deal stimulus package, which aims to "create" artificial jobs and spread the wealth.

No one can blame Americans for their instinctive embrace of risk aversion. Uncertainty always accompanies a market economy, especially after market capitalism has been undermined by its imaginary champions for the past eight years.

But remember; when folks start telling you a debate is over, it usually is just starting.