David A. Ridenour
|
Posted: Aug 13, 2020 12:01 AM
Share   Tweet
The opinions expressed by columnists are their own and do not necessarily represent the views of Townhall.com. 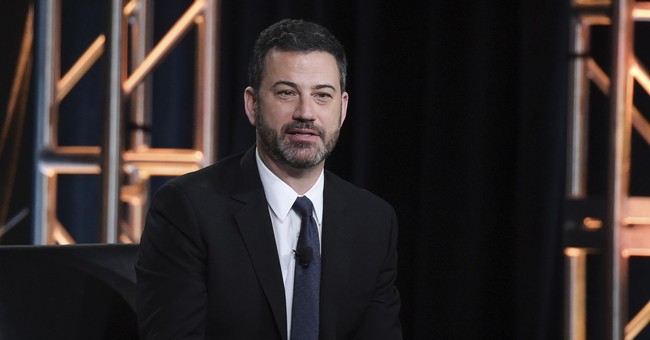 Jimmy Kimmel is supposed to return to host his show, “Jimmy Kimmel Live!” next month after an extended vacation. But ABC should make his vacation permanent.

I detest the cancel culture.

I’m tired of seeing people being bullied, threatened with losing their jobs or actually fired just because some delicate flowers took offense or had their feelings hurt by something said or done. But every once in a while, there’s someone whose offensive remarks are so consistent, so egregious and so unapologetic that they deserve to be canceled.

Jimmy Kimmel is just such a person.

Before he took off on his multi-month hiatus from his late-night talk show, Kimmel issued a hasty apology for wearing blackface and using racial epithets.

Nearly a year and a half ago, a video surfaced showing Jimmy Kimmel wearing blackface while impersonating former Utah Jazz power forward Karl Malone during his stint at Comedy Central’s “Man Show.” The video set off a firestorm, but neither Kimmel nor ABC acknowledged the controversy.

Then, just a few weeks before his “scheduled” vacation, audio emerged of Kimmel imitating rapper Snoop Dogg and repeatedly using the N-word. He was forced to finally issue an apology.

Explaining his Malone impression, Kimmel said, “We hired makeup artists to make me look as much like Karl Malone as possible. I never considered that this might be seen as anything other than an imitation of a fellow human being …”

Just an imitation of a fellow human being?  Well, you can read what he said and decide.

“Karl Malone read about white people on TV being deducted by alien, stickin all kind of Hell up their butt. And that’s a damn thang. Now, Karl Malone never seen no flyin' saucers hisself, but if he do, that’s going to be a spooky time …”

I’m not sure which is more offensive: Kimmel’s use of a minstrel-style dialect in his imitation of Malone, or his allusion to the racial slur “spook.”

Oklahoma State University coach Mike Gundy was forced to apologize for wearing a t-shirt of the cable news network One America News (OAN) after one of his black players – a Canadian, no less – found it objectionable. OAN has no history of racism, but Gundy apologized anyway and made sure to say, “Black Lives Matters to me.” He nonetheless received a one million dollar cut in his contract.

And Megyn Kelly lost her morning show on NBC for saying that when she was a girl, it wasn’t considered racist for a white to put on black make-up so long as they were playing a character.

What Kimmel did was much worse. He’s worn blackface repeatedly and hasn't even bothered to apologize since his offensive videos first came to light nearly a year and a half ago.

There isn’t a double standard here - it’s much worse. If bigotry had degrees as murder does, Kimmel committed first-degree bigotry. It was premeditated. And the troubling thing is that no one thought to advise him against it. Not a director, not a script-writer, not the make-up artists and not even an executive at CBS-owned Comedy Central, which aired his “Man Show.”

In his apology, Kimmel said, “I believe I’ve evolved and matured over the last twenty-plus years.”

In 2004, during halftime of game two of the NBA championship, Kimmel told sportscaster Mike Tirico that he was glad the Lakers were leading the Detroit Pistons. "They’re gonna burn the city of Detroit down if the Pistons win, and it’s just not worth it,” he said.

And then in 2013, he ran a segment on his show in which a child joked that all Chinese people should be killed to help erase U.S. national debt.

Kimmel hasn’t evolved much, but he hasn’t matured either. He began his apology by saying, “I have long been reluctant to address this, as I knew doing so would be celebrated as a victory by those who equate apologies with weakness and cheer for leaders who use prejudice ...”

It was an apology a four-year-old might make: I did not apologize because that’s what others wanted me to do.  It was not contrite, but insincere.

Firing Jimmy Kimmel for his impersonation of NBA great Karl Malone ought to be a slam dunk.

David A. Ridenour is president of the National Center for Public Policy Research, a non-partisan, non-profit educational foundation based in Washington, DC.  Ridenour may be followed on Twitter @DavidARidenour and at Parler @DavidARidenour.