Obama Doomed to Repeat Failures of Past 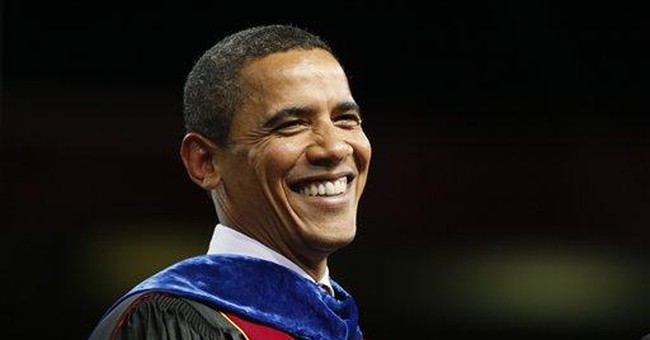 Fred Barnes showed in one of his recent columns in the Weekly Standard why he is one of Washington’s premier pundits by summing up President Obama’s performance to date thusly: “two of his stated goals (economic recovery, energy independence) are undermined by his actual policies.” A pithy and insightful observation, indeed.

When it comes to the economy, Obama does talk a mean game. But in the end, his “stimulus” and “recovery” policies will pile up more than $9 trillion in annual federal budget deficits over the next decade and lead us into a national debt that would equal 82 percent of total GDP within 10 years, according to the Congressional Budget Office.

This is not a recipe for growth. Such burdensome debt leaves the economy with a smaller stock of private capital for the future, and our current spending and borrowing binge will almost certainly lead to more taxes.

Moreover, he’s aimed much of his proposed tax burden at energy. The Obama Administration’s 2010 budget proposes $26 billion in new taxes directly on energy companies by what Obama deems as closing "unjustified tax loopholes." This is in addition to broader business taxes, some of which are specifically targeted at energy producers.

What Obama is targeting are not “loopholes” but rather standard tax treatment of the costs of doing business in the energy sector – like deducting the intangible costs of drilling, or amortizing a return on investment over the life of a well under the percentage depletion allowance, or allowing a tax credit for keeping marginal wells in production when oil prices are low. All these so-called loopholes actually add to US energy production, displace imports, and increase US energy independence.

Another significant portion of new government taxes – more than $5 billion annually - comes from a proposed excise tax levied on all oil and natural gas produced from the Gulf of Mexico, which is the source of 25 percent of the oil and 15 percent of the natural gas currently produced in the US! This is after the Obama Interior Department has delayed the release of a new leasing schedule for oil exploration offshore where more than 14 billion barrels of oil lie under federal waters.

Congress lifted the moratorium on offshore wells in October 2008; the Obama Administration won’t even consider a new leasing schedule until August 2009, and then only to start leases in 2010 at the earliest. This is certainly not a bold or meaningful step toward energy independence.

It is not that Obama has a problem signing off on federal leases, per se. Or even offshore platforms, rigs or other major infrastructure projects, for that matter. Because unlike oil and gas leases, President Obama has unveiled and expedited a plan to grant leases, easements, and rights-of-way to build new infrastructure for off-shore wind farms as well as experimental infrastructure to tap into ocean currents as a power source.

There is nothing wrong with off-shore wind farms. For example, Denmark – the world’s leader in that technology – produces almost 20 percent of its electricity from off shore wind power. However, Denmark uses about as much electricity as the State of Connecticut. Right now, according to the US Department of Energy, the US generates about one-tenth of one percent of its electricity from wind power. That doesn’t mean we shouldn’t try to expand that percentage – it simply means it is not a viable trade off for oil and gas. Nor does it help the economy with transportation fuel.

Just as the federal government can’t tax the economy into growth, it also cannot tax and regulate our most reliable and efficient domestic energy source into national energy independence. We learned that from Jimmy Carter, who tried, in one form or another, most everything that Barrack Obama has proposed.

At least Jimmy Carter had a sense of what he was putting forth. In a speech unveiling his energy plan in April of 1977, he said his plan “will demand that we make sacrifices and changes in our lives. To some degree, the sacrifices will be painful – but so is any meaningful sacrifice. It will lead to some higher costs, and to some greater inconveniences for everyone.” Barrack Obama, on the other hand, actually has put forth his plan as a way to create a new “clean energy economy” that will create “green jobs” and economic growth.

Indeed, history proves Barnes’ recent observations valid. Despite Obama’s optimism and grandiloquence, the actual policies are still the same old tax and austerity measures of Jimmy Carter’s. They didn’t work then, and they won’t work now.