A Birthday to Remember

Dan Wolgemuth
|
Posted: Nov 07, 2020 12:01 AM
Share   Tweet
The opinions expressed by columnists are their own and do not necessarily represent the views of Townhall.com. 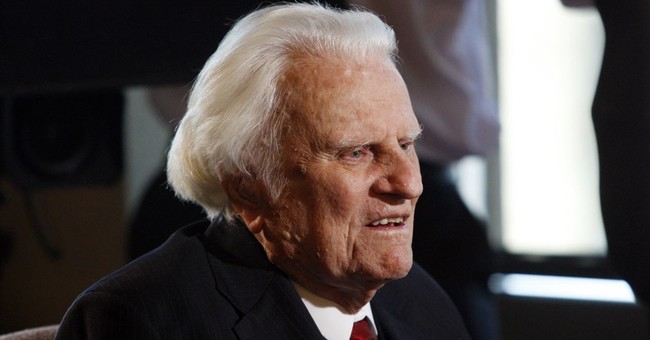 Time may erode the echo of his voice, but it will never silence the power of his message: Christ and Christ alone.

Billy, at 27 was the first full-time Evangelist in Youth For Christ, working for just $75 a week.

He was humble, called, propelled, and ignited by the message of Jesus and the power of the Holy Spirit. It was a fledgling ministry but an ageless mission.

Billy, in command of the moment and the platform… but never the owner of the stage—only a steward. Always a steward. On that stage he became an advocate, a catalyst, a lightning rod.

The moment was July 18, 1957 at Madison Square Garde—a Graham Crusade, a moment entrusted to the vision and voice of Martin Luther King, Jr. A timeless word, amplified then. A megaphone now. A transcendent prayer…

“We come, Oh God, with an awareness of the fact that we have not always given our lives to that which is hard and noble. In the midst of all the hard and noble aspects of justice we followed injustice.

“We stand amid the forces of truth and yet we deliberately lie.

“We stand amid the compelling urgency of the Lord of the earth as exemplified in the life of Jesus Christ, yet we live our lives so often in the dungeons of hate.

“For all of these sins, Oh God, forgive.

“And In these days of emotional tension when the problems of the world are dynamic in extent and chaotic in detail give us penetrating vision, broad understanding, the power of endurance and abiding faith and save us from the paralysis of crippling fear.

“Oh God, we ask you to help us to work with renewed vigor for a warless world and for the brotherhood that transcends race or color.

“We thank thee this evening for the marvelous things which have been done in this city thru the dynamic preaching of this great evangelist. We ask thee, oh God, to continue blessing him. Give him continued power and authority that as we listen to him tonight grant that our hearts and spirits will be open to the Divine influence…”

As though written yesterday.

And for the nearly six decades after that, Martin Luther King’s prayer for continued power and authority was answered in Billy's ministry, even as King's own life was prematurely snuffed out by hatred a decade later.

The legacy. The lessons. The anchored truth in a God of justice and mercy and grace and hope. In Jesus. Like Jesus.

The Graham platform was never his own, and because of that, prayers like the one from Martin Luther King, Jr., echo through time as an inspiration, a conviction that must carry us through 2020—into the souls of every follower of Christ for a brotherhood that transcends race or color, for the courage and commitment that honors our King. The King.

William Franklin Graham. A bridge builder. A light in the darkness. A steward for a 28-year-old named Martin Luther King, Jr. Stewards of a moment. Stewards of a platform. Our advocacy for God's agenda. Unity. Mercy. Grace. Salvation. Transformation.

Now, more than ever. Our all for what is hard and noble.

The legacy. Graham. MLK. Ambassadors for THE King.

A birthday to remember.