Significant Historical Trends All Point to a Trump Victory

Dan O'Donnell
|
Posted: Oct 21, 2020 12:01 AM
Share   Tweet
The opinions expressed by columnists are their own and do not necessarily represent the views of Townhall.com. 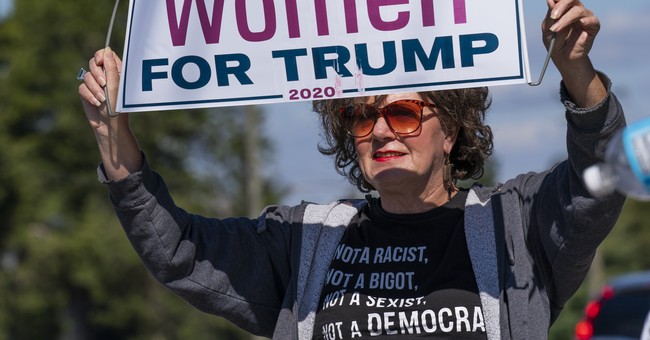 By now, the narrative has become gospel: Joe Biden is so far ahead in the polls that President Trump can’t possibly win re-election.  Every day, it seems, a new survey shows Biden with a 10-point lead.  CNN’s most recent poll even gave the former vice president a whopping 16-point advantage.

For historical perspective, the last time a presidential race ended up being that lopsided was 1984, when Ronald Reagan won 49 states.  No serious person believes that Biden will run up a similarly lopsided Electoral College victory, but no one bats an eye as poll after poll suggests as much.

This belies a level of historical ignorance that borders on willful denial, especially since nearly every reliable historical indicator suggests that Biden won’t win in a landslide…and in fact won’t win at all.

One of the most reliable predictors of presidential elections is the performance of the S&P 500 in the three months before Election Day.  In every election since 1984 (all but three elections since 1928), when the S&P 500 rose from early August through early November, the incumbent party has won the White House.

Even more encouraging for President Trump is the fact that since presidential primary elections were introduced in 1912, no incumbent has lost a re-election bid when he faced no serious primary opposition.

Only three incumbents in the primary era lost re-election, and all three faced a formidable primary opponent—Gerald Ford, who had to fend off Ronald Reagan before eventually losing to Jimmy Carter in 1976; Carter, who was primaried by Ted Kennedy four years later; and George H.W. Bush, whose primary challenge by Patrick Buchanan set the stage for the third-party candidacy of Ross Perot, which ultimately cost Bush the 1992 race.

Stony Brook University political scientist Helmut Norpoth has quantified this effect in what he has dubbed “The Primary Model.”

“It is a statistical model that relies on presidential primaries and, in addition, on an election cycle as predictors of the vote in the general election,” he explains on his website.  “Winning the early primaries is a major key for electoral victory in November.”

The Primary Model has correctly predicted 25 of the 27 presidential elections since 1912 (the only exceptions being the incredibly close 1960 and 2000 races) and gives President Trump a 91 percent chance of winning re-election.

The underlying logic of this model is sound, as a party united around an incumbent president has a tremendous advantage over a challenger who often must struggle to win over his primary opponents’ supporters in the general election.

It also translates into a massive “enthusiasm gap.”  The most recent Pew Research poll on voter enthusiasm found that a full 66 percent of Trump’s supporters said they “strongly support” him, while just 46 percent Biden’s supporters said the same.  Since strong support is a strong indicator of likelihood to actually vote for a given candidate on Election Day, the candidate who has had the strongest enthusiasm among core supporters has won every presidential election since 1988.

Trump’s support among Republicans seems to be uniquely strong, as he won 94 percent of the primary vote. His 18.1 million total votes nearly doubled the previous record for total primary votes for an incumbent president (Jimmy Carter’s 10.0 million in 1980).

Biden, on the other hand, won just 51.8 percent of the Democratic primary vote even though his party effectively cleared the field for him ahead of Super Tuesday.

If history is a guide, Biden will have more difficulty getting Democrats to actually vote for him on Election Day.   In fact, Biden’s own recent polling history suggests that there is at least some percentage of people who say they will vote for him but don’t.

Ahead of the Iowa Caucuses, Biden’s support in the RealClearPolitics average of polls was 19.3 percent.  His actual share of the vote was 14.9 percent.  In New Hampshire, his pre-primary polling average was 11.0 percent and he ended up with just 8.4 percent.

Only when Democrats became desperate to stop socialist Senator Bernie Sanders from running away with the nomination and started to coalesce around Biden did Biden finally start to over-perform his polling average.  In other words, Democratic voters weren’t especially excited to vote for Biden; they simply needed to vote against Sanders.

Democratic presidential voters haven’t been sold on Biden for most of his political career.  In 1988, a plagiarism scandal forced him from the primary.  In 2008, he had so little support that he dropped out a month before the first votes were cast.

This does not bode well for his chances in 2020, and neither does the 14-Year Rule (or “Quatorze Quotient”), which was popularized by journalist Jonathan Rauch and posits that “no one gets elected president who needs longer than 14 years to get from his or her first gubernatorial or Senate victory to either the presidency or the vice presidency.”

Biden was first elected to the Senate in 1972.   He didn’t make it to the vice presidency until 36 years later.  Today, 48 years removed from his first Senate victory, a Biden win next month would be an unprecedented break from Rauch’s 14-Year Rule.

A more recent trend also points to a Trump victory: Since its inception, Google Trends has predicted every single presidential election from 2004 on.  The candidate with the most Google searches during the election year has won each race.   This year, Trump has the largest lead in Google searches on record, roughly tripling Biden’s total.

This suggests that the voting public wants to learn more about the president, while Biden is something of an afterthought, a proposition supported by the significant enthusiasm gap between the two.

Voters also seem to be more enthusiastic about their personal situations than conventional wisdom might suggest.  A full 56 percent told Gallup this month that they are better off today than they were four years ago.

Ever since Reagan asked that famous question during a 1980 debate and an overwhelming majority of voters decided that they weren’t and voted for him over the incumbent Carter, pollsters have asked voters if they are indeed better off than they were when the current president was first elected.

It would of course stand to reason that if 56 percent of people feel better about their personal fortunes than they did four years ago (even amid a pandemic and recovery from an economic recession), then they would be more likely to vote for the incumbent president, but this trend is just that—a trend.

While each of the historical trends that point to a Trump victory is convincing, none should be taken as gospel.  Like pre-election polls, they purport to predict an ultimately unknowable future.  Unlike polls, though, there is more than a century’s worth of evidence to back them.