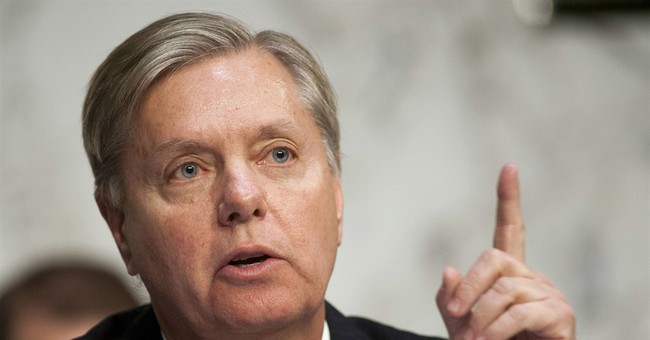 As evidence by last week’s rush to embrace a phony border security amendment, too many in the Republican Establishment are fixated on immigration reform as merely a quick fix political strategy. Earlier this month, Sen. Lindsey Graham (R-SC) became just the latest to reiterate this failed outlook:

“We’re in a demographic death spiral as a party, and the only way we can get back in good graces with the Hispanic community, in my view, is pass comprehensive immigration reform. If you don’t do that, it really doesn’t matter who will run, in my view.”

Not only is that the wrong way to view immigration reform, but it all but ensures terrible policy outcomes and continued political defeat.

In the days following the election, a list of who’s who among the Republican Establishment sounded off on the need for immigration reform. To be clear, there are plenty of good reasons to reform our immigration system, but many of these folks had one thing on their minds: winning the White House in 2016.

President Obama predicted this very reaction in his October 2012 interview with the Des Moines Register, claiming Republicans would “have a deep interest” in embracing amnesty after his reelection, which was secured because the “Republican nominee and the Republican Party have so alienated the fastest-growing demographic group in the country, the Latino community.”

Republican strategists – many of the same folks in charge of the 2008 and 2012 campaigns – looked at the top line numbers and decided the President was right. Mitt Romney had lost the Hispanic vote by 44 points, the largest gap since Bob Dole lost by 21 points to Bill Clinton in 1996. They concluded that given the projected growth in Hispanic voting population, a continued shift away from the GOP could spell electoral disaster. In their minds, they had to act…fast.

Enter the Senate’s Gang of Eight.

Former attorney general Edwin Meese says the bill The Heritage Foundation explains “should sound familiar” because “it’s quite close to the path and provisions” put forth in the 1986 amnesty passed by a Democrat Congress and signed by Republican President Reagan.

Following that amnesty – an amnesty signed by a Republican president – Democrats’ advantage among Hispanics jumped from 24 points to 39 points in the 1988 presidential election. Although the GOP won the election, they lost ground among Hispanics voters.

It was a similar story in 2008. Despite having been the driving force behind an amnesty proposal in 2007, GOP nominee John McCain lost the Hispanic vote by 36 points to a Democrat who helped derail the bill. In 2004, Democrats won Hispanics with just an 18-point margin.

Presidential electoral history is clear: the Republican Party does not gain politically when it embraces amnesty.

This should come as no surprise, though. As Pew explained following the 2012 election, 60% of Hispanic voters “identified the economy as the most important issue (of four listed) facing the country today.” Prior to the election, a FoxNews poll of likely Hispanic voters found that just 6% would vote based on immigration.

Nonetheless, left-leaning pundits are happy to indulge the logic, proclaiming that if the Republicans are to survive as a major political party, they needed to embrace comprehensive immigration reform (read: amnesty).

Democrats understand what Republican strategists seemingly do not: if the GOP wants to make gains among Hispanic voters, they must treat them like adults and take the time to win a policy argument. President Barack Obama and Chuck Schumer understand GOP acquiescence on amnesty will not result in a sudden swing of Hispanics toward the GOP.

Pandering isn’t a political solution; instead we must put forth policy solutions.

Hispanics still believe America is the land of opportunity, and it is incumbent upon conservatives to explain how our policy solutions promote growth, opportunity and freedom. While polls suggest Hispanic voters are not as skeptical of government as Republicans at large, their faith is not blind.

We must explain how conservative policy solutions improve the family budget, increase the quality and decrease the cost of health care, and how our kids’ future will be brighter if they have a quality education and less debt.

If the Republican Party is to succeed at the ballot box, they must prove the positives, not spend a year and hundreds of millions trying to prove a negative. This is how you make inroads with Hispanic voters (and other disaffected Americans), not pandering in search of a quick political fix.