Maybe This Flu Isn't for the Birds, But the Last One Was 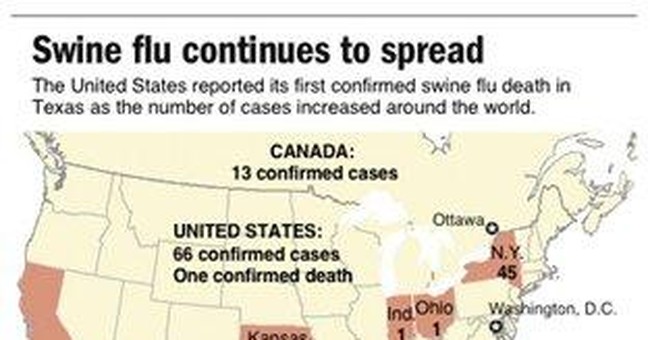 It seems like the end of the world. A deadly virus is sweeping across the globe killing off young and old alike. Media coverage goes round the clock dwelling on the danger. Sounds like the plot for a movie – Stephen King’s “The Stand” or maybe Will Smith’s “I Am Legend.” It’s also the media plot for the avian flu scare of 2006 that went nowhere.

Like most people, you have probably already forgotten. The media gave the danger tons of news coverage and ABC even delivered a cheesy made-for-TV apocalypse movie. Then … not much happened. The World Health Organization reports there have been 257 deaths from avian flu – worldwide. Less than 100 of those have come in the last two-plus years (2007-2009). But the media never looked at the symptoms of their own coverage to find out what was wrong.

This time, the threat might be real. U.S. officials have declared a public health emergency over the swine flu and international officials are warning this could become a pandemic. The virus has already spread to Europe and there are more than 100 dead just in Mexico.

But maybe the easiest way to tell that we should take this incident seriously is that the media never had a chance to pre-hype what might happen. So now, their round-the-clock response is, at least, driven by some actual events.

Avian flu was the ideal news story – one journalists love. It was a looming threat and it loomed so long you could write countless stories about it – complete with lots of on-location video, colorful graphics and expert commentary. It wasn’t just a news story in slow motion. It was a news story that never went anywhere at all. Every death is a tragedy, but put those 257 deaths in perspective. According to the centers for Disease Control, 36,000 Americans die each year just from flu. That’s less than one one-hundredth of 1 percent of the total flu deaths. And 257 are the total number for a global population of 6.5 billion.

In other words, avian flu was more the threat of a threat – and those are easy to hype. Ask ABC. In March 2006, ABC brought the apocalypse into our living rooms. The “news” network highlighted a doctor who predicted “that 50% of the population could die” because of bird flu.

As part of a weeklong series “Bird Flu: Fears, Facts and Fiction; What Americans Need to Know,” reporter Jim Avila interviewed Dr. Robert Webster “the father of bird flu.” Webster came right out and predicted that the virus would mutate. He was storing three months of food and water in his home like some Y2K survivalist, and said the chance of such an event were “about even odds.”

That’s what you need to be thinking about every time you look at the news stories about swine flu. Is this a national crisis? Not hardly. The United States is remarkably well-prepared with stockpiles of the drug Tamiflu just for such an emergency. You can credit the president who made that happen – George W. Bush – but you can bet the media won’t. According to Reuters, Obama “announced steps to release some of the U.S. stockpiles of the anti-flu drugs Tamiflu and Relenza.” But you’d have to find stories written years ago to see that Bush was the one to, as The Washington Post reported, “create a government unit to oversee response to a bird flu pandemic or bioterrorism attack.” That was in 2006.

That won’t be the only gap in the news stories about swine flu. With at least 1,600 official cases, Mexico is the hotbed for this virus. Where is the discussion of border security to keep the virus out of the United States?

It’s nonexistent. Yet, when Mexicans complained American guns were somehow to blame for their drug war, the mainstream media hyped it constantly. Now that there is a major threat to American health, there is no real discussion of guarding the border.

CNN claims that “customs and border protection is watching passengers for signs of illness.” That sounds comforting until you read the April 27 Reuters report on what is really happening at the border and that “Mexicans crossing by car and foot seemed unconcerned by the influenza scare and only a handful wore masks.”

Meanwhile, even the horribly run European Union is advising against the European non-essential trips to Mexico and other nations are taking the issue seriously. ABC News said that “In Japan, officials have been taking temperatures of those returning from Mexico.”

But in America, politicians have taken the temperature of the Hispanic voting bloc and consider not offending them to be more important than border security.

Another topic you won’t hear mentioned very much by the media.