Dan Celia
|
Posted: Mar 02, 2018 3:27 PM
Share   Tweet
The opinions expressed by columnists are their own and do not necessarily represent the views of Townhall.com. 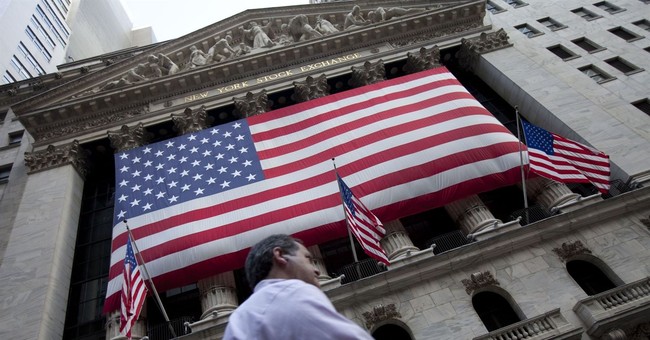 Trump’s announcement Thursday of steel and aluminum tariffs served as the ammunition to blow up the markets, re-load it with uncertainty and double-down on worries of inflation. This move must have a concise, detailed, well-thought-out walk-back very soon. But all that aside, here is where we really are.

I’ve been trying to put everyone’s mind at ease with reminders that economic growth and corporate profits are likely to be good this year—so good that we should see the economic rally continue, based on new fiscal policies and a great environment for business. We must not forget the positive impact of fewer government regulations, lower taxes, a less-intrusive government and the stimulus from a prospective infrastructure program. All of this is creating an environment conducive to job growth and a thriving free market.

Yet, no matter how much I emphasize these things, even as most of the correlating numbers back up my enthusiasm about the economy, it seems to make little impact. Too many people are focused on markets and markets alone. People watch their IRAs or 401(k)s and when they see them going down, their attitude sinks with the news. When they see them going up, even if it’s an era of false positives and poor economic fundamentals, they don’t care much; they become optimistic.

It seems that the testimony this week of Jerome Powell, the new Federal Reserve Chairman, has confirmed what I’ve been saying for some time: the economy is strong. Certainly, the Federal Reserve would not be interested in raising interest rates in a time of economic stagnation and the threat of sustainable corrections. The Fed is concerned about an overheated market.

I know we are concerned about inflation, but look a bit deeper into the causes of the inflation we are experiencing. It is primarily due to increases in wages and employee benefits, and enthusiastic consumer spending. Of course, this will lead to inflation, but it’s a rather healthy type of inflation. It is something that will correct itself, so to speak, as earnings and growth catch up and the enthusiasm settles down.

Many are talking about even more uncertainty in the markets, citing as evidence this week’s 300- and 500- point declines in the Dow. Many big-time investors are warning that there are signs that the markets are in for another drop, a big correction or perhaps something even worse. I ask: Are they really big-time investors or big-time speculators and traders? I think it’s the latter.

Some analysts are saying that today’s situation is very similar to 1987. The problem is that everyone forgets that three decades ago, we had 6 percent interest rates and very high inflation—two major differences. I know we are seeing some similarities to 1987, but we were in a very different corporate environment back then. After all, we didn’t have 12 years of pent-up growth like we have today. It hadn’t been 12 years since the last time we had 3 percent GDP growth—or 16 years since the last time we saw any real wage increases or a 40-year low in labor participation rates.

For many years, financial analysts have been talking about the “new normal.” So, if we're in a new normal, why wouldn’t we now be in a very new economic environment—one based on the pent-up forces being released from the new normal everyone was touting? For the past eight years, corporations have been forced to use some tricky financial engineering to maintain any kind of decent earnings reports. We are in a very different place today. Corporate sentiment is at all-time highs, with new enthusiasm about growth, money pouring into the economy, and their companies growing more rapidly than we have seen in a long time.

The idea that we will revisit recent lows is likely; maybe new lows will be tested. But somehow, we need to bring ourselves to rationally separate those things from investment decisions and understand that the economy is fundamentally sound. If you are an investor thinking about 10, 20 or 30 years from now, when you will be faced with retirement, this is not the time to buy into the concerns raised by traders and speculators. Stick to your plan of investing for the long term.

All of this could change when we start to see the underlying fundamentals of the economy begin to falter. But, for now, the trajectory of the economy—not the markets—still looks strong. I would argue that it is getting stronger. Hang on for the ride.