One People | One Destiny | One Great God

Dan Celia
|
Posted: Mar 02, 2017 12:01 AM
Share   Tweet
The opinions expressed by columnists are their own and do not necessarily represent the views of Townhall.com. 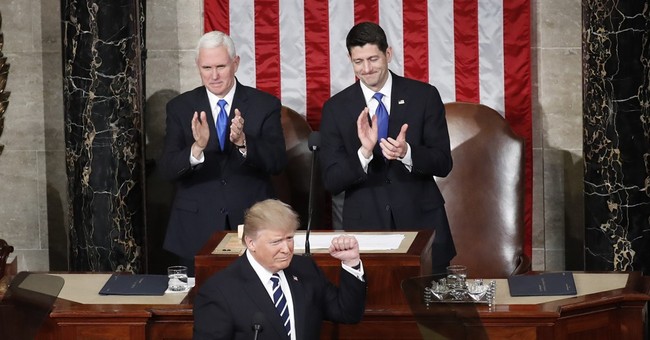 Donald Trump’s speech Tuesday night to a joint session of Congress may have been one of the greatest presidential speeches of my lifetime. Granted, I’ve only paid attention to the last nine presidents, but nonetheless, this speech was greatness personified.

The president talked about the kind of country we might leave to our children, the industries dying before our very eyes, and bringing back to life the American dream. And Donald Trump honed in on inner cities having hope again and American companies creating tens of thousands of jobs.

The Rule of Law

Trump also spoke about restoring our strength, our spirit and our security. The latter will be strengthened by making our borders secure and communities safe by enforcing the rule of law and defending our citizens against radical Islamic terrorists. He talked of a new alliance with the state of Israel and providing the military the tools needed to defend us.

He also discussed reducing tax rates for companies, cutting taxes for American workers, and protecting our workers as we revise policies for legal immigration. Trump reviewed an infrastructure program that will create millions of jobs, and talked of putting healthcare back in the hands of the American people.

He also characterized education as the new civil rights issue of the day; school choice is likely one of the things that the political left fears the most. It almost seems a given that by improving our educational system the president will restore our inner cities to their rightful place.

Perhaps a highlight of the evening was when Trump honored slain police officers, soldiers and their families, as well as citizens who paid the ultimate price for the good of America. This tribute lined up with his talk of funding for veterans and how his job is to represent the United States of America, the nation for which these men and women sacrificed their lives.

It became more obvious than ever that this president is not about representing the ideology of any particular political party or, for that matter, his own personal ideology or agenda.

This is a president who seems totally uninterested in changing the political cesspool in Washington. Maybe he knows and understands that change will happen as real leadership steps up to the plate. He realizes that the American people will follow his lead, leaving politicians little choice but to honor the wishes of those who hire them.

I couldn’t help but wonder what the American voters were thinking as they watched so many of the representatives they voted for stay seated—even as our slain soldiers, police officers and citizens were being honored and remembered.

As well as being a historic speech, Donald Trump’s words may have offered a horrifying reality check—namely, that despite the great things about America, for many people those qualities rank second to their extreme ideology of a progressive agenda.

I couldn’t help but notice that, throughout the speech, many attacked it as a political power grab. Leftists don’t want to yield the social control that is so important to so many of them, who only pretend to represent the best interest of Americans.

Instead, this was a speech for flag-waving Americans who love God and country and who tear up when “The Star-Spangled Banner” or “God Bless America” is sung. This was a speech for the patriots and immigrants who dared to dream the American dream, as well as for capitalists who dream of creating prosperity for American workers and the economy.

This was also a speech for people who care what kind of country we leave to the next generation. This was a speech for American exceptionalism and American patriotism.

It was a reminder that God’s hand of blessing is upon America.