Dale Wilcox
|
Posted: Dec 07, 2020 11:59 AM
Share   Tweet
The opinions expressed by columnists are their own and do not necessarily represent the views of Townhall.com. 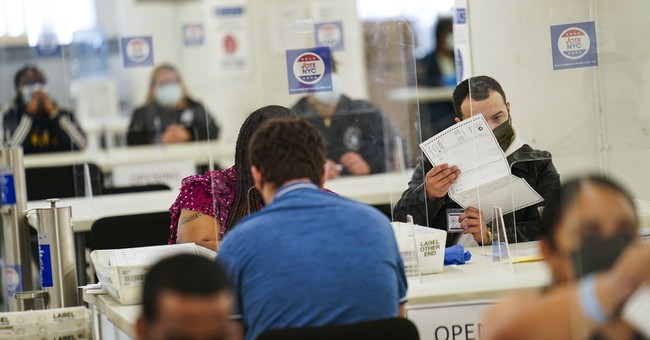 In the chaotic weeks since the presidential election in November, the news from conservative media has been dominated with charges of suspicious late-night deliveries of mail-in ballots and statistically impossible vote surges for the Biden-Harris ticket. While those are serious charges that require investigation, they are just some of the many ways we have learned how our electoral process is wide open for manipulation. Another way is the presence of non-citizens in the United States finding their way onto voting rolls, and it is just as great a threat as what has been alleged by the Trump campaign.

The American people have been warned about this for years. Illegal immigration metastasizes throughout our country and harms it in innumerable ways. Some of the most obvious symptoms are more competition for jobs, higher crime, and more drain on limited social services resources.

Then there are the less noticeable but equally dangerous other effects, like the harm it does to our electoral process. My organization, the Immigration Reform Law Institute, recently completed an investigation into electoral procedures in North Carolina, and the results are disturbing.

In many states, jurors are selected from lists of driver’s license holders and those on voting rolls. We found that in Mecklenburg County, the state’s second most populous county which includes metropolitan Charlotte, a total of 51 individuals were removed from the jury pool list because of non-citizenship between October 28, 2019 to July 7, 2020, as confirmed to us by the county’s Jury Office. We found similar results in two other large counties, Cumberland and Forsyth.

While a spokesman for the state’s judicial branch told us the non-citizens came from the driver’s license records, it does not eliminate the possibility that they are coming from voter rolls. Even the potential that they are coming from voter rolls brings the integrity of North Carolina elections into question. What revelations might a more comprehensive, statewide investigation bring, in North Carolina or any other state?

There is unlikely to be a wider investigation into this problem, however, in North Carolina or elsewhere. Why? Because the end result of the problem benefits certain politicians and their parties. While the Democrats are the primary beneficiaries of this, there are plenty of establishment Republicans who passively support it. Why fix something that is serving them so well?

That illegal immigration is tainting the integrity of our elections is not an unintended consequence, but rather it is by design. It is designed to keep money flowing into incumbents’ re-election campaigns and to allow them to stay in power.

Politicians have become practiced at selling mass migration to the public. Alexandria Ocasio-Cortez in 2018 was photographed, grief-stricken, at the gates of an immigrant detention facility in Texas which was actually an empty road. Sen. Chuck Schumer once brought out Syrian immigrants as human shields for a press conference and even burst into tears while attacking President Trump’s travel ban.

They put on quite a show that probably sways some people to their side, but it obfuscates from the true objective: to use immigration as a near-infinite source of new voters who will reliably vote for establishment politicians who offer them safe haven in America and access to a deep pool of welfare benefits, schools and jobs. American citizens who may suffer from all this are acceptable collateral damage. As a cherry on top, Big Business industries looking for the cheap labor that mass immigration provides will underwrite the campaigns of ambitious politicians if they play ball.

This thinly-veiled voter registration drive is buttressed by a host of other related policy positions. Not coincidentally, anti-borders politicians are also against voter ID requirements at polling places, restrictions on mail-in voting, and any attempt to authenticate voter signatures. Anything that brings more transparency to elections is clearly a sign of racism towards those who don’t look like us. It’s a devilishly clever scheme: subvert the legitimate electoral process to feather your own political nest, while wrapping yourself in the veneer of a true humanitarian doing it in the name of civil rights for all. Machiavelli couldn’t have done it better.

The presidential election of 2020 should go down in history with a giant asterisk for the Third World manner in which the votes were tabulated. It should also be a sign of things to come if we continue to allow the malignant effects of illegal and excessive legal immigration on our country to go untreated.