Dale Wilcox
|
Posted: Dec 14, 2018 12:01 AM
Share   Tweet
The opinions expressed by columnists are their own and do not necessarily represent the views of Townhall.com. 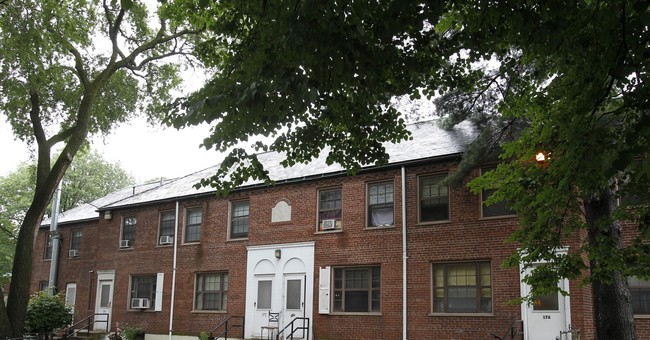 As America confronts its problems related to immigration, we are frequently reminded of the more obvious, direct consequences of our policies. They include crime, the threat to national sovereignty, and a drain on social services. Below the surface, we find that a poorly controlled, mass influx of foreign nationals has other undesirable effects. Chief among them is a scarcity of housing and a spike in housing costs for all citizens. Other countries are struggling with this issue, and the United States should view them as case studies in dealing with a problem that is already causing significant hardship for Americans.

While on the campaign trail recently, Australian Prime Minister Scott Morrison proposed a solution to his country’s housing inflation and infrastructure problems which policymakers here in the U.S. would likely find surprising: reduce immigration. Although obvious to most Americans, at least those in fast-growing areas, the connection between high population growth and pressure on housing and infrastructure simply isn’t made by U.S. politicians and policy analysts. It should be.

Tight property markets, for instance, can increase social divisions between the housing rich and housing poor. This relegates the latter to fringe areas, forcing them to remain renters and not become homeowners. Meanwhile, studies show that an inability to purchase a home can seriously impede young peoples’ decision to marry and start families. Unsurprisingly then, by addressing the economic and social hardships caused by population pressures, Bloomberg noted that Morrison’s proposal could be an “important vote-winner” in Australia this election year. U.S. politicians should start paying attention.

As we’ve seen in the nations many immigrants flee from, population pressures can have dramatic effects on a country’s quality of life. Speaking to voters about his proposal, Morrison articulated these concerns well, stating, “I know Australians in our biggest cities are concerned about population. They are saying: enough, enough, enough. The roads are clogged, the buses and trains are full. The schools are taking no more enrollments. I hear what you are saying. I hear you loud and clear.”

No doubt many Australians were happy to hear this. Three out of four immigrants moving to Australia go to just three parts in the country: Sydney, Melbourne and metropolitan Brisbane. In Sydney and Melbourne, for instance, close to half of all residents are now foreign-born. Melbourne, in particular, has population growth-rate running at around three percent, a level which would see the city double in size over the next 20 years.

Unsurprisingly, these big population increases have placed serious pressures on Australia’s housing market and infrastructure. As Bloomberg noted, the “flood of arrivals has swelled the population by 50 percent over the past three decades” resulting in “many residents [becoming] frustrated that their quality of life has been compromised, with house prices too high, increased congestion and wages stagnant.” According to that country’s transportation department, for instance, work commutes have been 65 percent longer in Sydney and 55 percent longer in Melbourne compared to most other cities. And with regards to housing, a recent report from the Australian Population Research Institute found the price-to-income ratios of those cities being worse than San Francisco’s. The “best solution,” the report’s authors conclude, is a “reduction in the demand side of the equation” which “can only come from a fall in the net overseas migration intake.”

The situation is just as bad in Canada where the population-growth rate is the highest among the Group of Seven nations (at 1.4 percent). Similar to Australia, the large majority of immigrants coming to Canada collect in just three cities: Vancouver, Toronto, and Montreal. When the previous federal government halted its immigrant-investor visas (similar to our EB-5 program), home-price pressures bore part of the blame.

Like Australia and Canada, legal (and illegal) immigrants coming to the U.S. tend to cluster in just a handful of cities, with around half going to New York, Los Angeles, Chicago, Miami, and Houston. And unsurprisingly, one of the few U.S. studies of immigration and home prices, a 2007 paper from the Philadelphia Fed, found correlations were just as tight as Ley’s. Elsewhere, in a 2016 Moody’s Analytics report on wage increases caused by President Trump’s immigration plans, analysts noted that due to Arizona’s 2008 E-Verify law, which led to a big reduction in that state’s illegal-alien population, some areas of Phoenix saw price declines of a whopping 63 percent; a result “attribute[d] partly to financial pressure on owners who had been renting homes to immigrants who departed.”

Nothing should be more bipartisan than making infrastructure more accessible and housing more affordable for working people and young families. The economic and social hardships caused by runaway population growth are serious and become more serious the longer they are not addressed. Let’s hope policymakers in this country start paying attention.