Donkeys, RINOs, and PUMAs, Oh My! 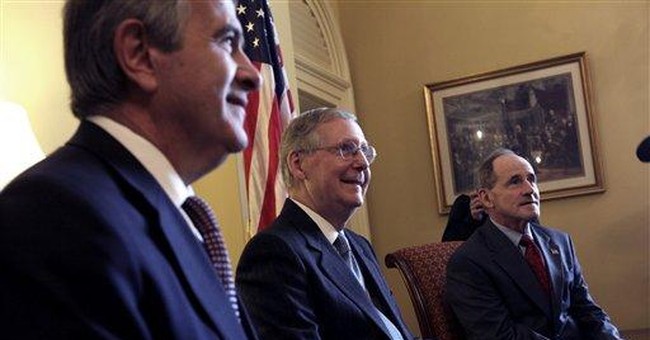 The zoopolitical realm has never been so crowded. Leftists, liberating themselves from the center-feigning overtures of the past and promoting, now without shame, the ideas that made Europe what it is, have never been more proud to call themselves Democrats or more willing to exercise the obstinate defiance so characteristic of their mascot. After all, the Democrats now possess the “Office of the President Elect,” the Senate, the House, the public schools, the universities, the mainstream media, more than a few ardent activist judges, PBS, and, most importantly, the holy grail of Democratic politics – the adoration, endorsement, and promised fraternity of virtually every socialist, non-democratic, and totalitarian nation in the global village. The world, it seems, is quite literally theirs to lose.

On the other hand, less fanciful Democrats, who understand all to well that their party passed on a qualified candidate with actual experience in favor of one banking on his magical, almost iconic, charisma, lick their wounded PUMA paws and wonder what the remnants of their party will do when the realities of governance overpower the effervescent glamour of a well-played campaign drama. They fear, if quietly, that their party has over-played its hand and will indeed lose the world in due course.

And then there are the rarest creatures of them all, those elusive phantoms, the genuine Republican elephants, who stare incredulously into the hollow eyes of the great grey beasts that have overtaken their party and ask – “hey, who invited the RINOs, and where did they get those fake trunks?” It seems that only now the true conservative Republicans are beginning to realize that while they slept, they lost their souls. Indeed, they can scarcely call themselves “conservative” anymore, because there is very little left to conserve.

In practice, there is very little left of the founding principles. The Founders simply would not recognize the eternally-evolving ethereal cacophony of politically correct juris-imprudence that the left now calls the Constitution. One can imagine the disbelieving reply of a Signer of the Constitution: “A fundamental right to brutally take the life of an unborn child? . . . A fundamental right to have the state steal from one citizen to give to another? . . . The ability to tax a church into oblivion if it dares speak out against a political candidate? . . .The power to force the removal of the Ten Commandments from the public square? . . . What?. . . In the Constitution we wrote?. . . Heaven forbid!”

Whatever is left of the Constitution, there is even less left of traditional morality. Indeed, in a mere forty years, the ideological fires of Haight Ashbury have melted down every communication of objective morality into prima fascia evidence of “hate speech.” Sexual misconduct between people of different genders is glamorized through every medium of entertainment. Sexual misconduct between people of the same gender is not only tolerated but is increasingly celebrated by society and sanctioned by governments. And, if you do not like the gender God assigned you, you can always disagree with Him and decide to be the other gender or some combination of the two; increasingly, the law will accommodate.

Likewise, there is certainly little or nothing left of the limited government and financial stewardship that conservatives have so vocally championed. In recent years, Republicans have spent public funds at a rate to be envied by even the most indulgent Democrats. They seem to have forgotten that the monstrosity of government bureaucracy can swing the socializing hammer of nationalization as effectively through disingenuous bailouts as it can through the direct theft of private property. To the outside observer, it would appear in many ways that we are all Democrats now – fighting merely over whose unstable positive law will rule the day and which special interests will reap the stolen fruits of redistributed property.

The appearance is misleading, however, as the core of America remains open to reason. Up until the very day they painted the map blue, even Democrats would admit that America is a center-right country. The one thing the American People will not tolerate when choosing leaders, however, is cowardice. Increasingly, leaders are elected when they unapologetically stand for something greater than themselves – even if the electorate does not necessarily agree with their positions. Why else would a nation that overwhelmingly favors protecting traditional marriage between one man and one woman elect a president who impenitently supports the “gay” agenda?

If it is to remain relevant, much less experience a renaissance, the Republican Party must become the new progressive. It must shelve its clever electoral strategies and muster the courage to be faithful to its principles even if polling data says to lie, or at least equivocate. It must decide what it believes and unapologetically speak the truth with compassion. It must apply its principles impartially, governing itself before attempting to fix the other party. If it is going to lead, it must lead – and lead the nation not to where it has been but to the blessings of liberty found only when government limits itself to its original purpose: securing the unalienable Rights that the Creator has granted to each and every person. If it leads in this way, the people, hungry for the mature substance of truth rather than the superficial sweetness of socialist confections, will follow. If not, it will fail because conservative counterfeits will never be as attractive as utopian lies.