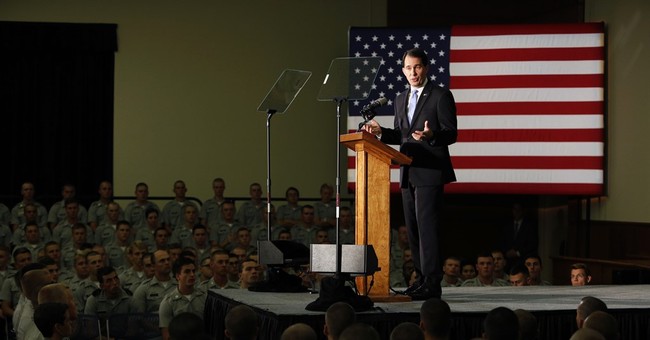 Starting appropriately at Eureka College, which Reagan always gave credit for his intellectual awakenings, Governor Walker is declaring war on Washington corruption, which comes from Washington bigness, which comes none too soon. How many more of us need to be groped by perverted TSA officials before we stand up to bureaucratic nonsense?

Bigness—Wall Street banks, Big Education, Big Labor, Big Government, et all---always leads to corruption and loss of freedom and personal rights. Grover Norquist was too kind, saying big government should be drown in a bathtub. Walker, as an outsider and a successful Mid-western governor has seen first-hand what the national government can do to drown the economy of a state and destroy the lives of individual American citizens.

Isn’t it ironic that big government can’t treat American veterans or hurricane victims efficiently, but provides funds to kill unborn babies efficiently? It cannot deliver basic goods and services. Maybe it is because as a matter of cosmic force, it is always easier to destroy than to create.

Unfortunately the buddy system now includes members of the Republican Party in Congress who can’t seem to lay a hand on the Obama agenda, can’t even effectively fight against the corruption in this city.

Ultimately, big liberal government—like that in Nazi Germany---leads to enslavement, arrogance and corruption. After all, we have an insane Supreme Court, which says that the defense of innocent human life is beyond the reach of government, but marriage – a private act – comes under the purview of government. As a consequence, a little public clerk in Kentucky is imprisoned without a trial without being charged, without a bail, all for her religious beliefs.

You have to go to Cuba or the Middle East or China to find that sort of criminal injustice. Thanks John Roberts.

Governor Walker says he wants to “wreak havoc” on Washington. That means upsetting the status quo and truly making the revolution a reality.

He might just be the man to do it.