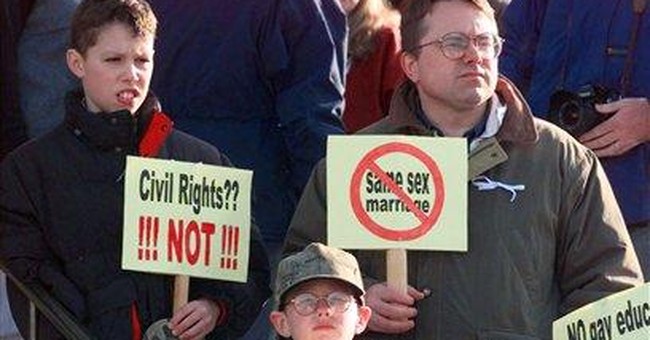 On Election Day in 1978, Republican State Senator John Briggs of California surveyed the wreckage of his political career. Briggs was the sponsor of Proposition 6, a ban on homosexuals teaching in the Golden State's public school system. Prop. 6 had been soundly defeated.

Although early polling showed widespread support for the Briggs proposal, this support eroded over the summer and fall of 1978, partially because of the unexpected – unexpected by Briggs, anyway – opposition from former California Governor Ronald Reagan.

A self-described “libertarian-conservative,” Reagan found the proposal offensive. He viewed it as a violation of privacy, and believed it could subject law-abiding teachers to blackmail. After initially sidestepping the issue, Reagan ultimately spoke out forcefully against Proposition 6. Briggs, who had hoped to ride the amendment to the California governorship, was asked by reporters who was to blame for its ignominious defeat, and he simply replied: “Ronald Reagan.”

At the time, Reagan was preparing for his third try for the GOP presidential nomination. Success in the 1980 Republican primaries entailed staving off incursions from George H. W. Bush, John Connally and Bob Dole, all of whom courted the support of the emerging Christian Right This newly powerful faction backed the Briggs Amendment, but Reagan did not waver.

No one will ever know for sure, but given his principles and intellectual courage, one could imagine why Reagan might also have found fault with the “Marriage Amendment” to the Constitution supported by some Republicans including George W. Bush.

Reagan saw the Constitution as a brilliant document because it does not outline what the citizenry cannot do; rather it stipulates what government cannot do. It is a mechanical document of negative governance. The Marriage Amendment runs contrary to the principles of the Constitution and is offensive both intellectually and historically, like the silly proposal to ban flag burning.

The issue is moot until the Supreme Court takes up the 1996 Defense of Marriage Act (DOMA) which preserves federalism in marriage. The simple solution to prevent gay marriages in America is for Congress to regulate the appellate jurisdiction of the Supreme Court, so that no appeal of the DOMA could be heard. DOMA was passed by the Congress and signed by Bill Clinton for the express purpose of allowing the states to regulate marriage. But this solution is less attractive politically to those who wish to fire up the Christian troops through a brawl over amending the Constitution.

True conservatives believe deeply in the rights and privacy of all citizens. We scratch our heads when we see a political party so out of whack that it calls for overturning Roe and sending it back to the states for adjudication, but wonder why those very same states are not capable of deciding their own marriage laws. The contradiction defies logic. In the 1950’s, conservatives Frank Meyer and L. Brent Bozell II gave a gift to the floundering GOP: a rationale for governing. These two brilliant theoreticians devised the “fusionism” theory which brought together the economic right and the social right, which on face seemed in conflict with each other.

A minimalist governing philosophy, they argued, could unite the two factions for too much government threatens both the business classes, with over-regulation and over-taxation, and the social right with “nosey” policies that undermine the authority of the family, the local schools and the church. Along with fervent anti-communism, this gave the GOP its raison d’être and served the GOP quite well, until recently.

The modern GOP and their enablers on K Street have made a conscious decision to abandon the Buckley-Goldwater-Reagan-fusionist argument and remake the GOP as the party of big government. They opened Pandora’s Box and out flew largess and patronage, subsidies, corruption, and earmarks. Out the window went the hard work of millions of dedicated conservatives.

For fifty years, the Religious Right understood its compact with the Economic Right and they were content to slug it out with liberalism in the states and localities. But when the Bush Republicans came to town, religious conservatives, under the siren song of “compassion,” embraced federal intervention in everything from education to the Terry Schiavo affair, from “Faith-Based Initiatives” to the federal Marriage Amendment. The Bush crowd promised the “easy fix” of top-down government to these religiously-motivated voters.

Meanwhile, many economic conservatives, flush with the possibilities presented by congressional majorities and a Republican in the White House, forgot their libertarian roots. They too heard the tune of the temptress, this one the melody of money, access, and the baubles of power. Today, they come to Washington looking for a handout instead of insisting on being left alone. We are now witnessing the sorry spectacle of Washington bailing our banks and mortgage holders for engaging in bad faith agreements. Of course, this is all understandable when a Republican president says, “When people hurt, government must move.” Can there be a Cabinet-level department of Anxiety Counseling far behind?

The GOP no longer recognizes the meaning of the term “public servant” or abides by the Jeffersonian notion that power flows upwards from the people to the government, not the other way around.

Several years ago at a Board meeting of the American Conservative Union, an official from the White House asked to present the Administration’s plan on immigration. At the conclusion of the Bush aide’s presentation, someone asked the question: “Why did the President denounce the Minutemen as “vigilantes?” The aide’s reply was both instructive and disappointing. He simply said, “Because they weren’t authorized.” His answer told us all that conservatives need to know about the modern GOP.

Karl Rove saw Bush as the 21st Century’s William McKinley and himself as Mark Hanna. Hanna, McKinley’s political operative, married the GOP and corporate America into a governing behemoth, long before FDR’s Harry Hopkins coined the phrase, ‘tax and tax, spend and spend, elect and elect.” Rove, Tom Delay and others quite clearly wanted to do the same with the 21st Century Republican Party.

The GOP’s new reason to be has led former Arkansas governor Mike Huckabee to proclaim that if elected president, he would ban smoking in the United States. Huckabee, like many in the GOP, wants to remake the GOP as the “Mommycrat” party. The remaining Reagan conservatives in the party want neither the “Big Socialist Sisterism” of Hillary Clinton nor the “Big Christian Brotherism” of Huckabee. They want Republican leaders to once and for all stop pandering and recognize the proper and limited role of American government. The GOP must take their fingers off the throats of their fellow Americans and stop telling us how much they care.

In 1980, a reporter asked Ronald Reagan for his view of government. He simply and elegantly replied that the role of government was to protect us from each other and not to protect us from ourselves. No Reaganite – no real conservative -- would even think of banning smoking in America. The GOP is no longer the party of expanding freedom but increasing security. From Lincoln to Teddy Roosevelt to Reagan, all understood that the expansion of freedom was what the GOP should stand for and this is what would make it great and successful. And that it would only be successful by challenging the status quo through a framework of freedom, rather than defending it through a framework of arrogance and corrupt power.

The French Revolution ended in what was called the “Thermidor” as the revolution collapsed amidst betrayal, corruption and hubris. So too the modern GOP may be facing its own demise, although it will probably come with a whimper—not with show trials and beheadings.

Some would say more’s the pity.