Colin McNickle
|
Posted: Sep 26, 2018 9:50 AM
Share   Tweet
The opinions expressed by columnists are their own and do not necessarily represent the views of Townhall.com. 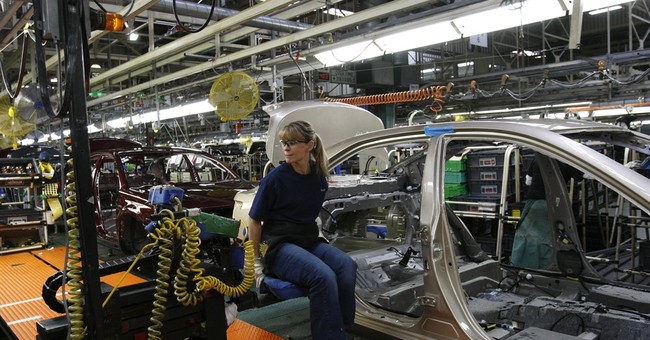 Pennsylvania’s total tax collections this past fiscal year exceeded those of the prior year. But that does not necessarily point to a strengthening commonwealth economy, concludes a new analysis by researchers at the Allegheny Institute for Public Policy.

“The 4 percent increase in general fund tax revenues for fiscal 2018 over 2017 should not be construed to mean the state is performing well compared to fast growing states or to the national economy,” say Frank Gamrat, executive director of the Pittsburgh think tank, and Jake Haulk, its president emeritus and senior advisor (in Policy Brief Vol. 18, No. 36).

And a more comprehensive overview of the economic data suggest the Keystone State has failed to address a trio of chronic growth retardants, the scholars stress.

Total general fund revenues for fiscal 2018 topped $32 billion, up from fiscal 2017’s $30.75 billion, according to the state Department of Revenue. While the latest revenues represent the second-largest percentage increase in total tax receipts over the past five years, they were about a half-percent below the state’s projected $32.13 billion.

“This may be a sign that businesses in Pennsylvania are not fully benefitting from a faster paced national economy,” Gamrat and Haulk say. “Or, it could be they are struggling under Pennsylvania’s tax and regulatory environment.”

Also exceeding the state’s projection were collections for Pennsylvania’s personal income tax, the largest revenue generator. While $13.30 billion was predicted for fiscal 2018, $13.4 billion was collected, up 5.8 percent over fiscal 2017, Revenue department figures show.

That said, federal income tax collections, even with tax cuts, were up 7.8 percent through July 2018 in the fiscal year that began in October 2017.

But even with rising state tax receipts, it would be a misnomer to conclude that the commonwealth’s economy is picking up steam.

“Household survey data (seasonally adjusted) for August 2018 suggest that a significant strengthening is not occurring,” the Ph.D. economists note.

To wit, while the increasing national civilian labor force suggests strong employment opportunities, a 38,000-person drop in the Keystone State’s labor force in fiscal 2018 over fiscal 2017 – combined with a gain of only 7,000 employed persons – suggests a large number have stopped looking for work.

Yes, it could be that retirements have increased. “Or it could be discouraged workers and that would not be a healthy sign for the state’s economy,” Gamrat and Haulk say.

And then there’s this critical metric: Nonfarm jobs in Pennsylvania rose by 1.1 percent in the August 2017 to August 2018 period as the national rate rose 1.6 percent.

“This continues a trend in which total nonfarm employer payrolls have struggled to break out,” the think tank scholars say.

Just as troubling has been Pennsylvania’s chronic struggle to create goods-producing jobs, including those in manufacturing, that, versus service jobs, lead to higher wages and offshoot industries that better help the economy expand.

Pennsylvania’s growth in education and health services, up 2.62 percent in the year ending in August 2018, topped the national growth rate of 1.93 percent.

Be that as it may, “The below-national gains in nonfarm jobs in Pennsylvania point to persistent and longstanding problems with its business climate,” Gamrat and Haulk conclude. “The high corporate tax rates, a smothering regulatory climate and fealty to unions all play a part in holding the state’s economy at subpar levels.”

Another Liberal Media Outlet Just Ran a Brutal Story on Kamala Harris
Townhall
With next to nothing left to lose, Chris Cuomo is apparently trying to take CNN head Jeff Zucker down with him
Twitchy
Joe Biden Entered the Bubble Last Night and Perfectly Illustrated the Two Americas
Redstate
The Morning Briefing: Even the Partisan Hack MSM Is Souring on Kamala Harris
PJ Media