Colin McNickle
|
Posted: Mar 18, 2017 12:01 AM
Share   Tweet
The opinions expressed by columnists are their own and do not necessarily represent the views of Townhall.com. 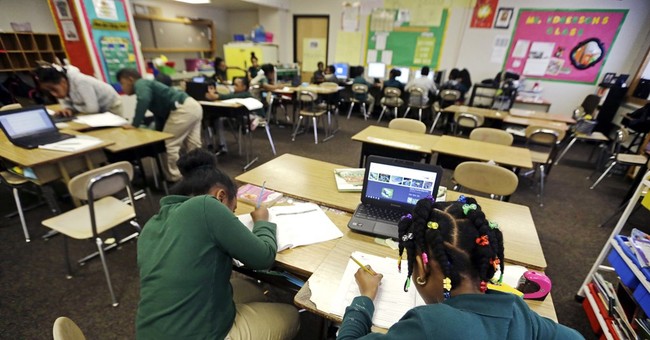 The Pennsylvania State System of Higher Education must reduce capacity and/or consolidate degree programs at its 14-member schools if they are to survive and prosper, says a scholar at the Allegheny Institute for Public Policy.

The system is a state-owned group of universities. Its schools range in size from Cheyney University, with just over 700 students, to West Chester University, with more than 15,000 full-time students.

But enrollment has been flagging. The number of Pennsylvania high schoolers graduating each year -- which represents the largest pool of State System students -- has plateaued and is expected to fall. That, and graduation rates at some of the State System schools, raise interesting questions, says Jake Haulk, president of the Pittsburgh think tank (in Policy Brief Vol. 17, No. 13).

Combined enrollment at the 14 schools fell 11.1 percent between the 2010-11 and 2015-16 school years. “All schools except West Chester experienced declines, ranging from less than one percent at Slippery Rock to a 43 percent drop at Cheyney,” Haulk says.

Eight schools had decreases of 15 percent or more while four saw enrollment down more than 20 percent. Mansfield and Clarion recorded huge losses with enrollment down just shy of 30 percent.

“More importantly, the enrollment drops have been accompanied by very high acceptance rates,” Haulk says; 10 of the schools accept 80 percent or more of their applicants, with five of those accepting more than 90 percent.

And while most of the graduation rates at the State System schools (with the notable exception of Cheyney) are in line with or better than the national average rate for both four and six years, Haulk says the rates at several schools are higher than expected based on the academic readiness of enrollees.

Which prompts this question:  “Does that mean the schools have far superior instruction compared to other schools across the country or are the curricula and courses not sufficiently rigorous?”

All told, Haulk says the State System schools “present a mixed but generally unhealthy picture with nearly half the schools facing serious difficulties.”

“In short … the last five years have been a time of struggle.”

Also factoring in high faculty costs, Haulk says the situation “points to a need to rethink the (State System) model.”

“It is reasonable to say that the severe problems faced by several of the schools cannot be solved absent a large increase in the number of graduates and improvement in the academic readiness of graduates leaving the state’s high schools,” he says.

Noting it is unreasonable to think either of those “desirables” will occur any time soon, Haulk says it becomes incumbent on the State System to begin  reducing capacity and/or consolidating degree programs.

“There is no defensible purpose in having each of the universities to offer the same wide range of degree majors,” he says. “It would be far more rational to have the schools use a focused approach and become very good and well known for their limited offerings.”

Among other things, Haulk suggests the roundly failing Cheyney be sold to another predominately black university or a group of investors in order to best preserve and further promote its mission of minority education. And he says a few of the other troubled State System schools could become two-year “feeder schools” for other four-year institutions.

Unfortunately, Haulk says, with all the tenured faculty, alumni and entrenched interests at each school, “meaningful change coming from the system itself is very unlikely.”

Thus, “Without question, it is time for the Legislature and the governor to start looking for answers. It will take a lot of time, so they should begin now,” he says, adding that state-related universities receiving state funding also should be included in the study.