Why Turkey is Now a Target and a Tinderbox 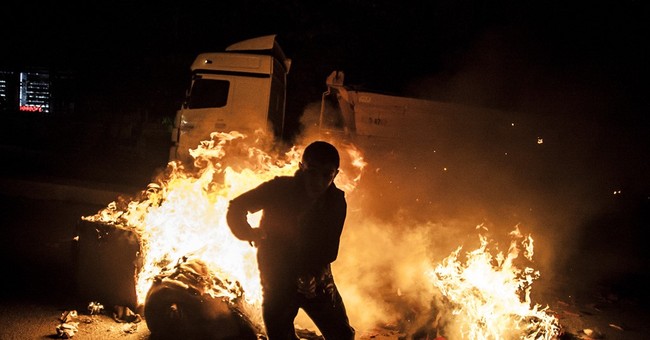 That was the boast made three years ago by Ahmet Davutoglu, then Turkey’s foreign minister, today its prime minister. Events have not justified his confidence: Last weekend’s bombing in Ankara, the deadliest in Turkey’s modern history, being only the most dramatic example.

As I write this, there has been no claim of responsibility for the more than 95 civilians murdered by, according to government spokesmen, two suicide bombers. But if the Islamic State was behind it, that was not just predictable, it was predicted: “The potential for a domestic strike is real,” my Foundation for Defense of Democracies colleagues Jonathan Schanzer and Merve Tahiroglu wrote in August.

Initially, Turkey’s policy toward the Islamic State – that’s the name ISIS/ISIL gave itself after proclaiming a caliphate on June 29, 2014 – was what might be called “live and let kill.” Turkish authorities did little to impede the flow of jihadis, weapons and money moving across its border into Syria. With virtual impunity, agents of the Islamic State recruited Turkish citizens and, according to a leaked police report, set up “sleeper cells” throughout the country. Turks made lots of money trading oil and antiquities stolen by the Islamic State.

Is it possible that President Tayyep Recep Erdogan, the most powerful political figure in Turkey, thought he could make an ally – or at least a strategic partner -- of the Islamic State? Whatever his calculation, he appeared to have two overriding priorities: toppling Syrian President Bashar al-Assad – the client of Iran’s Shia rulers who since 2011 has been slaughtering his country’s Sunnis -- and eliminating Kurdish forces in Syria lest they encourage Turkey’s large Kurdish minority to consider self-rule a realistic possibility for themselves as well.

Then, in July, a suicide bomber killed 33 civilians, most of them Kurds, in the southeastern border town of Suruc. Turkish intelligence officials were among those who concluded that the Islamic State was responsible. Soon after, Turkish authorities began rounding up suspected jihadis at home and even carrying out a few airstrikes against the caliphate in Syria. The US, after having been stymied for months, also was given a green light to use Turkish bases to strike the Islamic State.

A video denouncing Mr. Erdogan as a “traitor” who had sided with the “crusaders” against his fellow Muslims was the Islamic State’s initial response.

Saturday’s attack targeted civilians demonstrating for peace between the Turkish government and militants in the Kurdish southeast of the country. On the one hand, the government had been negotiating with the PKK, a Kurdish separatist group that the U.S. and the European Union have designated as a terrorist organization. On the other hand, the Turkish government has been bombing PKK bases in the remote mountains of northern Iraqi Kurdistan.

So could the PKK have been behind Saturday’s attack? The PKK does not have a history of targeting civilian gatherings. Among the organizers of this rally was the pro-Kurdish HDP Party and many of the victims were Kurds. Also, the PKK had been expected to announce a unilateral ceasefire and, in fact, did so just hours after the bombing. Selahattin Demirtas, co-chairman of the HDP, denounced Saturday’s bombing as a “massacre, a vicious, barbarous attack.”

The fallout from Saturday’s attack has taken on an ugly political dimension. In June, Mr. Erdogan’s AKP Party lost the majority it had held since 2002. That was due in part to the rise of the HDP which seeks minority rights for Kurds but does not call for separation. Parliamentary elections are scheduled for Nov. 1.

There are serious analysts who suspect Mr. Erdogan had a hand in the bombing, perhaps expecting that fear will cause voters to rally behind him. Such suspicions have been compounded by the AKP’s calls to ban public political rallies and their shutdown of Twitter following the attack. I think it more probable that anger toward him will increase in light of his government’s failure to provide security, even in the nation’s capital.

It’s not as though Mr. Erdogan doesn’t have other issues with which to grapple. Russian President Vladimir Putin has ordered warplanes to invade Turkish airspace and several Turkish planes have even been put under radar lock. This has made Mr. Erdogan appear feckless. Of course, since Turkey is a member of NATO, the same can be said for the American-led alliance.

If Russia’s offensive causes more Syrians to flee, Turkey is likely to be their destination though many will continue on to Europe to seek refuge and welfare-state entitlements. Mr. Erdogan can be expected to find ways to encourage their migration north. And you needn’t be a Kremlinologist to understand why Mr. Putin might think he benefits from additional burdens being heaped onto European backs.

President Obama recently argued that the conflict in Syria is not a “proxy war between the United States and Russia.” He added: “This is not some superpower chessboard contest.” Which raises the question: What is it then?

Certainly, as Mr. Davutoglu said, “a wave of change” is creating a “new Middle East.” Certainly, too, Turkey is not up to the task of managing it. Instead, it may be the Islamic State, the Islamic Republic of Iran and Russia that transform this strategically vital region. You might expect the Obama administration to respond with alarm, not to mention new and intensified strategic thinking. You’d be wrong, of course.