Slaughter in the Synagogue 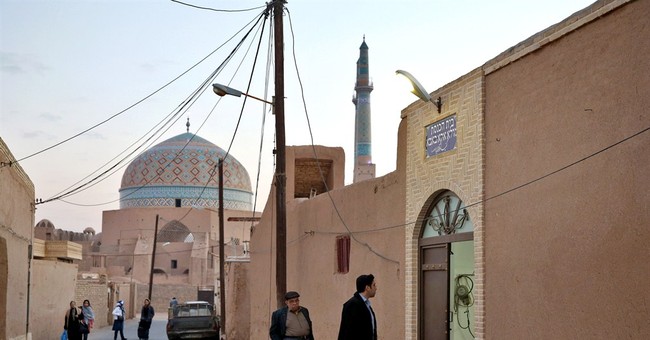 Executioners for the Islamic State use knives to cut the throats of Christians, Yazidis and “apostate” Muslims. Palestinian executioners last week used knives and a meat cleaver to slaughter Jewish worshippers in a synagogue in west Jerusalem.

Those fighting for the Islamic State say they are waging a religious war. Hamas columnist Dr. Issam Shawer praised last week’s slaughter as a “martyrdom operation” against the “descendants of apes and pigs.”

The point I’m driving at is not that Hamas and the Islamic State – also referred to as ISIS and ISIL – are a single entity or even overtly allied. But both are committed to the imperative of Islamic conquest and domination. Both target non-combatants as a means toward that end. And both embrace an ideology based on a supremacist and bellicose interpretation of Islamic scripture.

The so-called international community pretends not to perceive these parallels. There is general agreement on the need to “degrade and eventually defeat” the Islamic State. But there is no serious objection to Qatar and Turkey -- along with Iran -- lavishly funding Hamas, now ranked by Forbesas the world’s second richest terrorist organization, second only to the Islamic State. Increasingly, Europeans are leaning toward recognizing a Palestinian state that would be ruled by a coalition comprised of Hamas and its rival, Fatah.

It would be nice to say that Fatah is moderate, that it can exercise a restraining influence on Hamas, and is seriously interested in finding a path to peace with Israel. Because those premises are questionable at best.

Most recently, Fatah leader and Palestinian Authority President Mahmoud Abbas has accused Jews of “contaminating” the most important religious site in Jerusalem. He called Jews who merely visit this site “settlers” whose presence is a “provocation.” Even Secretary of State John Kerry has acknowledged that such rhetoric incites terrorism.

The site to which Mr. Abbas refers is known to Muslims as the Noble Sanctuary. Its most prominent structures are the al Aqsa mosque and the Dome of the Rock, a shrine. Both were built atop the Temple Mount, the place where King Solomon is believed to have built his temple, destroyed by Babylonian conquerors around 586 BC, and where the Second Temple arose and then was razed by Romans in 70 AD in retaliation for Jewish rebellion against the empire. (In antiquity, building Islamic holy places on the rubble of other religions’ holy places was a way of demonstrating dominance.)

Fast forward through centuries of wars and conquests: From 1949 to 1967, the Hashemite Kingdom of Jordan ruled east Jerusalem. Jews were denied access even to the Western Wall and the ancient Jewish cemetery on the Mount of Olives. The Jordanians destroyed dozens of synagogues. Others were turned into stables and chicken coops. Jewish headstones were used in the latrines of army camps.

Then Egypt’s Gamal Abdel Nasser led Jordan and other Arab countries in a war intended to wipe Israel off the map once and for all. The effort failed. Israeli soldiers drove out Jordanian troops and took possession of the Noble Sanctuary/Temple Mount.

As Simon Sebag Montefiore recounts in “Jerusalem: The Biography,” his masterful history of the city, Defense Minister Moshe Dayan “saw an Israeli flag atop the Dome of the Rock” and immediately ordered it removed. “Dayan – always the Israeli who most respected, and was most respected by, the Arabs, who called him Abu Musa (son of Moses)” soon wrote this statement: “To our Arab neighbors, Israel extends the hand of peace and to all people of all faiths, we guarantee freedom of worship. We’ve not come to conquer the holy places of others but to live with others in harmony.”

Dayan went further, deciding that the Waqf, an Islamic religious endowment, would be put in charge of the Temple Mount. What’s more, even though “after 2,000 years, Jews could now finally visit” this holy place, they would be “forbidden to pray there.” Mr. Montefiore adds: “Dayan’s statesmanlike decision stands today.”

Yes and that concession to Islamic sensitivities was enshrined in Israeli law. Palestinian leaders not only ignore that -- they have been accusing Israeli authorities of planning to deny Muslims access to the site and desecrate the mosque and shrine.

To be fair, some Jews have been arguing for a repeal of the ban on Jewish prayer on the Temple Mount. Though the Israeli government can’t gag them, it has consistently said there will be no change.

Mr. Abbas knows all this yet continues to pour fuel on the fires set by Hamas over the summer -- starting with the kidnapping and killing of three Israeli boys and culminating with the discovery that Hamas had constructed tunnels under Israeli farms and villages. Hamas’ plan was for terrorists to emerge from these tunnels and mass-murder Israelis while dragging others into subterranean dungeons.

Barbarism of this sort – including the killing of worshippers in mosques and churches -- has become routine beyond Israel’s borders, lands where the Islamic State fights and conquers, as does Jabhat al Nusra, an al Qaeda affiliate; Hezbollah, Iran’s Lebanon-based foreign legion; and the forces of Bashar al Assad, Iran’s Syrian satrap.

For America or Europe to make concessions to such groups would be immoral and, perhaps worse, counterproductive. By the same token, Israelis should not be pressured to appease those Palestinians who reject peaceful coexistence and deny the Jewish state’s right to exist.