Iran and Diplomacy vs. Engagement 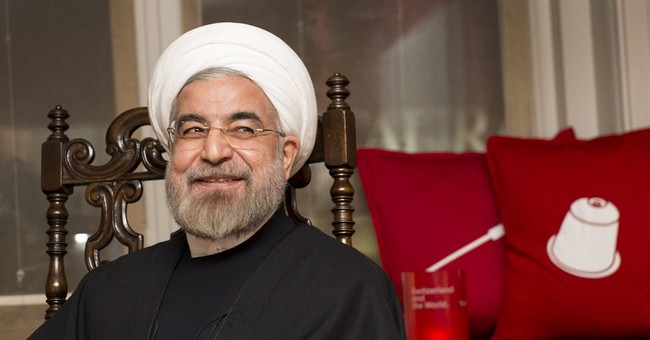 ‘Iran’s rulers are not open to engagement no matter what mix of carrots and sticks are offered.” Peter Beinart, a contributing editor of The Atlantic, attributed that remark to me on a radio show on NPR last week. I e-mailed to ask him when I had said it. He quickly responded, sending me a link to a piece I wrote for National Review Online in 2011, just after it was revealed that agents of the Islamic Republic had planned to blow up a ritzy Washington, D.C., restaurant while the Saudi ambassador and other diners were enjoying their risotto Armani and penne integrali Valentino. “Wow!” I thought. “What a memory Peter has!”

Not exactly. A few days later, he published a piece attacking as hypocrites and warmongers those Republican and Democratic congressmen favoring a bill that would tee up additional sanctions on Iran should negotiations fail. To support his case, Peter assigned “two talented college students . . . to investigate” — meaning they dug up quotes from “some of the most prominent commentators now justifying new sanctions.” Since such commentators are, he said, “allies” of the members of Congress supporting the sanctions-in-waiting bill, their quotes reveal what those members really believe. (A rather tenuous thesis, don’t you think?)

My words — along with those of Max Boot, Matthew Kroenig, Joshua Muravchik, Bill Kristol, Eliot Cohen, and Abe Greenwald — were included. Peter further noted: “After I quoted May on the radio last week, he e-mailed to explain that he considers ‘diplomacy’ and ‘engagement’ to be different things.” Yes, I do make that distinction. Allow me to explain why.

Peter earns part of his living as an associate professor of journalism and political science at the City University of New York. I would hope that when he’s not assigning his students to investigate us “prominent commentators,” he’s familiarizing them with significant thinkers of the past.

If this is the view that Iran’s rulers embrace — if, in other words, they don’t buy into such fuzzy and fashionable Western notions as “confidence building” and “conflict resolution” — Peter and others (not least in the Obama administration) are wrong to believe that Iranian diplomats are pursuing “engagement” or a “peace process” or, to use the older diplomatic lingo, rapprochement and détente.

Ignoring such evidence, Peter accuses me and others of attempting to “torpedo talks while blaming Iran for their failure.” Iranians, he argued on the radio program, “bravely” went to the polls last spring and elected Hassan Rouhani — whom Peter believes is a “moderate” — as Iran’s president. Peter goes on to say that “to justify new sanctions as a means of settling the Iranian nuclear dispute ‘without the use of force’ is patently dishonest.”

In truth, no one knows whether increased economic pressure will convince Ali Khamenei, Iran’s supreme leader (“the title itself is repugnant to decent modern ears,” writes Leon Wieseltier of The New Republic — of which Peter was once editor), that his nuclear-weapons program is more liability than asset, endangering rather than strengthening his regime. But even if the odds are against a good outcome (that would be my judgment), surely muscular diplomacy is preferable to feckless diplomacy — which only emboldens authoritarians, as long historical experience has established.

I’d also turn Peter’s accusation around. I suspect that he and most of those who oppose even the threat of tougher sanctions are not saying what they really believe, that is, that they want President Obama to accept what he has called “unacceptable”: Iran’s rulers — self-proclaimed jihadist revolutionaries and the world’s leading sponsors of terrorism — becoming nuclear-armed and, before long, the hegemon of the Middle East.

I further charge that they’ve given no serious thought to what that would mean for America and the West — e.g., the end of nuclear non-proliferation and the likelihood of a nuclear “cascade”; Iran’s gaining enormous leverage over much of the world’s global oil supplies and, by extension, Europe’s economy; Iran’s becoming an existential threat to Israel and Saudi Arabia and other nations.

Which brings to mind two other Clausewitz quotes: “To secure peace is to prepare for war,” and “The best strategy is always to be very strong.” Perhaps Peter might assign his talented college students a paper on those themes.