Iran’s Rulers and the Art of the Deal 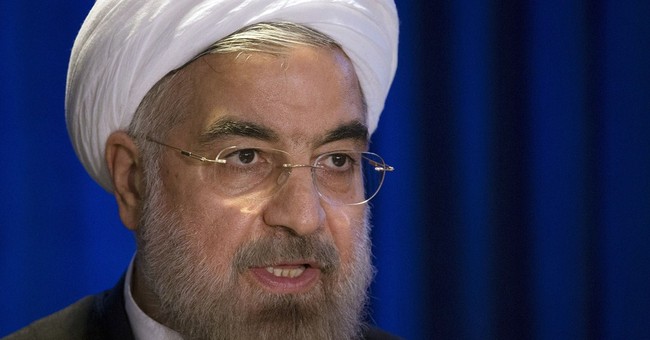 “I assure you nobody ends up being more war-weary than me.”
— President Barack Obama, August 30, 2013

The American president openly admits that he and his nation are tired of fighting. You, on the other hand, are not — despite crippling sanctions, a war with Iraq that cost a million casualties between 1980 and 1988, and the strain of continuing to support the embattled dictatorship in Syria. You wake up each morning eager to wage jihad against “the Great Satan” and his friends.

Deceiving your enemy has never been difficult, but these days, it seems, Americans are eager to deceive themselves. For example, on Friday Politico ran the headline: “For Obama, finally, a foreign policy win.” Specifically: “Obama became the first American president in 34 years to speak directly with his Iranian counterpart. . . . Obama touted the progress his team has made negotiating on Syria and the opening of talks with Iran, the nation’s nemesis for two generations.”

Iran’s rulers, according to the U.S. State Department, have long been the world’s leading sponsors of terrorism. They are responsible for the deaths of hundreds of American soldiers in Iraq and Afghanistan. They plotted to blow up a restaurant just a few miles from the White House in October 2011. In 1983, they ordered the slaughter of hundreds of U.S. Marines in Beirut. In 1979, they took American diplomats hostage. Yet persuading Rouhani — who actually is not Obama’s “counterpart” but rather the top adviser to Supreme Leader Khamenei — to chat on the phone following his refusal to shake Obama’s hand at the U.N. constitutes a foreign-policy victory? Really?

As for Syria, there is a U.N. Security Council resolution. It allows Bashar Assad, Iran’s client, to get away with mass murder and state terrorism. The resolution does not even declare him guilty; much less does it inflict punishment. All that is required is for Assad to surrender the stockpiles of chemical weapons he long denied possessing.

Which it is not likely he will do. To date, his government has told international inspectors that it has just over 30 chemical-weapons sites. The U.S., however, believes Assad has more than 50. Under the U.N. resolution, if Assad is shown to be lying, what will be the consequences? There may not be any. A second Security Council resolution would be required for “enforcement action,” and Russia can use its veto to block any the U.S. proposes. This represents “progress”? Really?

Our enemies seem to understand us so much better than we understand them. In an interview with George Stephanopoulos last weekend, Iran’s minister of foreign affairs, Javad Zarif, spoke in fluent English of “mutual distrust” and “mutual steps each side needs to take in order to convince the other side that its intentions are positive and for a better future for all of us.”

Zarif, it is fair to speculate, perceives how fervidly Americans want to be convinced that the conflict that began when the Ayatollah Ruhollah Khomeini led the Iranian Revolution in 1979 has been mostly a misunderstanding, with both sides to blame and both sides hoping for a new day of peace and amity. Zarif told Stephanopoulos that when his government inscribes “Death to America!” on missiles, they intend no threat or offense, “they’re talking about the policy.” Really?

Rouhani also told reporters that Iran “has never chosen deceit as a path. We have never chosen secrecy.” In fact, however, Iran has practiced “denial and deception; it has blustered and played for time. All the while, it has kept an eye on the day when it might be able to build a nuclear weapon. The world has negotiated with Iran; it has balanced the pain of economic sanctions with the promise of reward if Iran unambiguously forsakes the bomb. . . . Iran’s intentions are malign and the consequences of its having a weapon would be grave.” Those are not the words of some hawk, Islamophobe, Iran-basher, or neoconservative, but of Britain’s left-of-center Economist magazine.

Lessons are being learned. Mustafa Alani, a veteran Saudi security analyst with the Geneva-based Gulf Research Center, told the Wall Street Journal last week: “We are learning from our enemies now how to treat the United States.”

Obama and Stephanopoulos might have asked to see a copy because, as the Middle East Media Research Institute (MEMRI) has pointed out, there is no evidence that such a fatwa was ever issued. Certainly, a text has never been made public.

And even if such a fatwa does exist and does say what Obama believes and Zarif claims, that would not settle the issue. The scholar Amir Taheri has noted that “a fatwa is an opinion, not a hukm (an edict comparable to a papal bull). Issuing fatwas is a mechanism for guiding individual believers, not binding the umma (the community of Muslims) . . . let alone Iran as a nation-state.”

There is, however, something “called a khat-e-hokumati (state decision) which would be the equivalent of a presidential edict in the United States or France. But Khamenei has issued no such thing on the nuclear issue.” At most he has “expressed an opinion that he or any other mullah can contradict or cancel anytime.”

At this moment, Iran’s rulers are in violation of five unanimous Security Council resolutions mandating that Iran cease all uranium-enrichment activities, as well as their obligations under the Nuclear Non-Proliferation Treaty. The “right” to uranium enrichment that they insist upon and say is “non-negotiable” is to be found nowhere in international law. They are simply asserting and demanding it.

Is there any chance that Rouhani and Zarif have been empowered by Khamenei to change course? “Our damaging sanctions have gotten Rouhani on the phone,” House Foreign Affairs Committee chairman Ed Royce said last week. “We must increase the economic pressure until Iran stops its nuclear drive.” His Democratic counterpart on HFAC, Representative Eliot Engel, strongly agrees. A credible threat of military force also might weigh on the minds of Iranian rulers — though it’s possible they have concluded that Americans are far too war-weary to actually use that big stick.

So American negotiators have their work cut out for them. They may be tempted to make a deal that can be spun as a victory — even if it’s really a defeat. Imagine you’re Rouhani, Khamenei, or Suleimani: What would you think then? More to the point, what would you do?