Eye to Eye on Iran 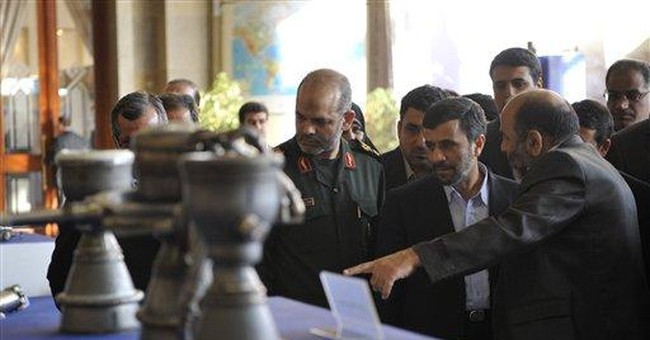 Washington's partisan divide is as wide as it's ever been. Democrats and Republicans bitterly disagree on fundamental points of principle and policy. So it should not go unremarked: Last week, the Senate passed - unanimously - a bill that would impose serious sanctions on Iran. A similar bill already has passed the House by a 412 to 12 margin. What explains this sudden outburst of harmony?

Members of Congress from both parties appear to have recognized that if those who now rule Iran acquire nuclear weapons the consequences will be dire.

Iran's 1979 revolution began with the overthrow of the Shah, but it is meant to end with the overthrow of "infidel" dominance everywhere. Hardliners envision Iran as an oil-powered, nuclear-armed, terrorist-sponsoring colossus, straddling the Middle East while waging a global insurgency. "The Iranian nation has overcome the superpowers and is standing on the victor's podium," Iranian President Mahmoud Ahmadinejad has said. The West, he added, will "bow down to the greatness of the Iranian nation. ...A world without America and Zionism...surely can be achieved."

Within Iran's ruling elite, there are also those who might be viewed as religious extremists. They believe war is necessary to bring about an apocalypse. Only when millions of people - Iranians among them -- are screaming in agony will the Mahdi return to save the world. "We do not worship Iran, we worship Allah," the Ayatollah Ruhollah Khomeini, father of the Islamic Republic said in 1980. "For patriotism is another name for paganism. I say let this land [Iran] burn. I say let this land go up in smoke, provided Islam emerges triumphant in the rest of the world."

There may be moderates within the regime, too, but after the blatantly fraudulent election of June 12, 2009, their sympathies would have to be with the anti-regime dissidents, not the ruling mullahs and their SS-like partner, the Revolutionary Guards. No moderate could condone the regime's brutal response to those demonstrating against dictatorship: the murders, the hangings, the imprisonments, the rapes and the torture.

Is it possible to prevent Iran's theocrats and thugs from getting nukes - without the use of military force? We don't know because no one has made much of an effort. President Bush, preoccupied with Iraq and under chronic attack for "unilateralism," outsourced this task to our European allies who spent years talking with Iranian diplomats and making no progress whatsoever.

President Obama tried extending his hand to Ahmadinejad and Supreme Leader Ayatollah Ali Khamenei. They have made it clear they consider Obama just as "satanic" as previous American leaders. Nor has it helped to hold out the possibility of a "grand bargain," an offer to end Iran's "isolation" and "integrate" Iran into the "international community." For one, Khomeinists don't want to join the circus - they want to run the show. For another, Iran has never been really isolated.

Right now, Iran is doing billions of dollars of business with Europe; it wields enormous power at the U.N.; and its representatives are everywhere - including in the United States where they work out of an "interest section" at Pakistan's embassy in Washington and have a mission - an embassy in all but name -- to the U.N. on Third Avenue in Manhattan. Iranian students continue to be welcomed in the U.S. where they may study nuclear physics and computer sciences - disciplines they can later employ to wage war against us.

The sanctions bills that have passed Congress would target a chink in Iran's armor: its dependence on gasoline imports. Yes, ordinary Iranians will suffer as fuel becomes scarce and more expensive. But President Obama is articulate enough to explain where the blame belongs. He could add that Americans look forward not just to lifting the sanctions but to working with Iranians in a spirit of cooperation - as soon as Iran has leaders interested in such relations.

It would be useful if the President also provided both moral and material support to those Iranians who have been marching in the streets, chanting: "Obama! Are you with us or against us?"

First, of course, the House and Senate bills need to be melded in conference committee. Apologists for Iran's despots - there are many at Washington think tanks and in academia -- will try to water it down. They will be joined, unfortunately, by the U.S. Chamber of Commerce which doesn't want the government to interfere with business interests. I agree with that as a principal but make an exception for Iran: Sanctions represent the last, best hope to peacefully prevent such despots as Ahmadinejad and Khamenei from building a nuclear arsenal, a development that would have many ill effects, not least for international commerce.

If Congress does give Obama the tools necessary to impose crippling sanctions, will he use them? Who knows? But here's what we do know: The President has a rare opportunity to bring hope and change on a global scale -- without deploying a soldier or firing a shot. Helping Iranians reform or replace the present regime, scholar Robert Kagan recently wrote, would be an achievement "second only to the collapse of the Soviet Union in its ideological and geopolitical ramifications." Should Obama facilitate the cause of Iranian liberation, "his place in history as a transformational world leader would be secure."

In 1979, Iran's Islamist Revolution was the spark that set off the War Against the West that has raged ever since. The atrocities of Sept. 11, 2001 represent the most devastating battle - so far. The advent of a nuclear-armed and jihadist Iran would escalate the conflict. By contrast, an Iranian government more concerned with the welfare of its citizens than with power and conquest, would ease tensions in the Middle East and beyond. If President Obama contributes to that result, he will deserve - and receive -- support from both sides of the aisle.