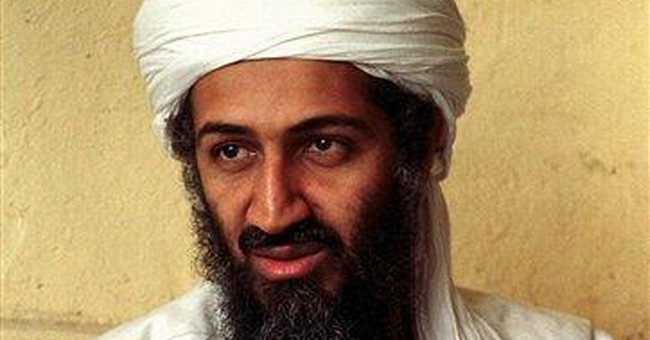 A few days of vacation in the Rocky Mountains is a good time to catch up on one's reading. But if I was looking for escape from the issues on which I spend most of my time, I didn't find it in "Churchill," the brief but penetrating biography by Paul Johnson, among the world's greatest living historians. In particular, Johnson's account of the 1930s holds up an eerie mirror to the present.

Johnson notes that when Hitler and the Nazis came to power in Germany in 1933, most Europeans failed to recognize either the nature or the gravity of the threat. Winston Churchill - retired soldier, popular writer, not very popular politician -- was the exception. He understood that unless free peoples acted decisively, they would come under attack, sooner or later.

Churchill was derided as an alarmist, or even a "warmonger." The well-known economist, John Maynard Keynes, argued that Hitler had legitimate grievances: in particular the unjust Versailles Treaty that had held Germany down since the conclusion of the first great war of the 20th century. Clifford Allen, a prominent British politician, "applauded Hitler," saying: "I am convinced he genuinely desires peace." Archbishop Temple of York agreed. Hitler had made "a great contribution to the secure establishment of peace," he said.

Today, of course, it is the ruling Islamists of Iran who candidly express their aggressive and even genocidal intentions. In speeches and sermons, they pledge to wipe Israel off the map, and vow to bring about "a world without American." For three decades, "Death to America!" has been the regime's rallying cry, inscribed also on the sides of missiles whose range and accuracy increase year after year.

And once again, those who would take these threats seriously and act decisively are dismissed as alarmists, or denigrated as warmongers by foreign policy mandarins. Once again, they insist that grievances must be addressed: Did not the CIA meddle in Iranian domestic politics in the 1950s? With American troops in Iraq and Afghanistan, don't Iran's rulers have cause for concern?

In the 1930s, the Nazis bought heavy weapons from Joseph Stalin, the Soviet dictator, who could not imagine that Hitler would use those weapons against him a few years later.

Iran's Khomeinists have been working feverishly to acquire nuclear weapons and the means to protect and deliver them. They have had little difficulty buying what they can't develop on their own from Russia, as well as from Western European countries whose leaders have persuaded themselves that a nuclear-armed Iran will be someone else's problem.

Hitler made common cause with Fascists in Italy and Spain, and with the militarists in Japan. Iranian President Mahmoud Ahmadinejad has established close alliances with such anti-American leftist strongmen as Venezuela's Hugo Chavez and Bolivia's Evo Morales.

Iran's war machine includes Hizbollah, which has developed not just as an armed militia inside Lebanon but also as an international terrorist proxy. Our intelligence community appears to know little about Tehran's relations with al-Qaeda. But there can be no doubt that Shia militants and Sunni militants collaborate on occasion against their common enemies. The recent revelation that Osama bin Laden's closest relatives -- including one of his wives, six of his children, and 11 of his grandchildren -- have been living in a compound outside Tehran provides additional evidence, if any were needed.

Johnson recounts that in 1930s Britain, the elites wanted to "leave everything to the League of Nations." As German military strength grew, such top British government officials as Anthony Eden insisted that the armies of the United Kingdom and France should not expand, as Churchill urged, but should shrink instead, in order "to secure for Europe that period of appeasement which is needed."

Finally, in 1938, British Prime Minister Neville Chamberlain engaged the German Führer - "supreme leader" would be a reasonable translation of that title -- at Munich, returning home to announce that through his diplomatic efforts common ground had been found, and that "peace in our time" had been assured.

Churchill saw through this fog of self-deception. Chamberlain's diplomacy, he said, had resulted in "total and unmitigated defeat." Churchill anticipated that the nations of Central and Eastern Europe would recognize how weak the democracies had become and "make the best terms they can with the triumphant Nazi power." Hitler would then absorb those nations, and "sooner or later he will begin to look westward."

Today, foreign policy elites want to rely on the United Nations -- which is more corrupt and dysfunctional than the League of Nations ever was. President Obama continues to extend his hand to Iran's rulers, apparently not perceiving the significance when a spokesman for Supreme Leader Ayatollah Ali Khamenei calls it "the hand of Satan in a new sleeve," and -- adding racist insult to injury -- tells the world: "The Great Satan now has a black face."

Adjustments are being made in the Middle East. In recent days, Ali Larijani, a top aide to Khamenei, has met with Egyptian President Hosni Mubarak. Turkey's leaders have signed multiple agreements with Syrian President Bashar al-Assad, who serves Khamenei, much as Mussolini served Hitler.

Lebanese Prime Minister Saad Hariri has just spent two days with Assad. He paid this visit, noted journalist Michael J. Totten, with "Hizbullah's bayonet in his back. Assad's regime assassinated Saad Hariri's father, Rafik, in 2005. There is no alternate universe where Saad Hariri is OK with this or where his generically ‘positive' statements at a press conference were anything other than forced. ... When Hariri went to Damascus, everyone in the country, aside from useless newswire reporters, understood it meant Syria has re-emerged as the strong horse in Lebanon."

The United States, Europe, the U.N. --- all had vowed that Hariri's murderers would be brought to justice. But they haven't been. The "international community" pledged it would not permit political benefit to derive from assassinations ordered in foreign capitals. But that's exactly what has been permitted - and licensed for the future.

After Munich, Churchill experienced moments of intense despair. In the past, he wrote to a friend, "the peace-loving powers have been definitely stronger than the Dictators, but next year we must expect a different balance." Indeed, he said, the democracies were unlikely to survive "unless by a supreme recovery of moral health and martial vigour, we arise and take our stand for freedom as in the olden time."

Today, taking a stand for freedom would require less. We would need to impose serious sanctions on Iran: A strong bipartisan majority in Congress already has voted for legislation that would put that arrow into Obama's quiver. The question is: Will he use it?

In addition, it would be useful to provide - at long last -- moral and material support to Iran's courageous anti-regime dissidents. Measures could be taken to isolate and ostracize those most responsible for Iran's oppression at home and terrorism abroad: the leaders of the Iranian Revolutionary Guard Corps, which may be seen as a kind of Iranian Gestapo. Military measures should remain on the table, in case all peaceful means of restraint prove inadequate.

In the end, Johnson's "Churchill" is inspiring and distressing. Inspiring because Churchill was, finally, vindicated. The Anglo-American alliance recovered its "moral health and martial vigour" and took its stand for freedom. Hitler and the Nazis were decisively defeated. But it's distressing because Churchill's spirit is so little in evidence these days, while the views and values of his detractors echo in the speeches of too many Western policy makers.

Just after September 11th, 2001, the British government loaned the White House a bronze bust of Churchill created by the great sculptor, Sir Jacob Epstein. Not long after he entered the Oval Office, President Obama sent it back.