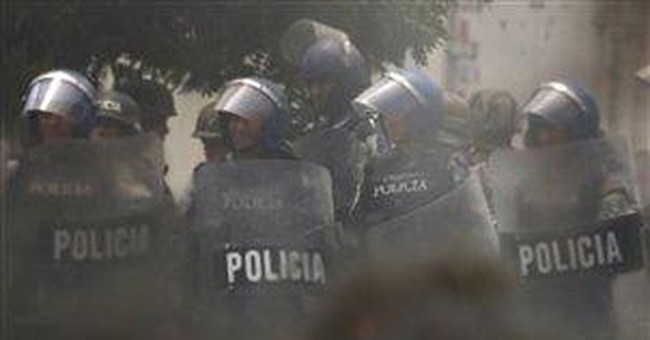 Historian Bernard Lewis has observed that a nation can make few mistakes worse than this: to be "harmless as an enemy, and treacherous as a friend." Is that a fair characterization of American foreign policy under the Obama administration?

Start with Honduras which has been a stable and valuable American ally for two decades. Recently, President Manuel Zelaya attempted to subvert his country's laws and democratic institutions in pursuit of the kind power enjoyed by such left-wing and anti-American strongmen as Venezuela's Hugo Chavez, Cuba's Raul Castro and Nicaragua's Daniel Ortega. Honduras' Supreme Court stood up to Zelaya - eventually ordering the military to remove him from office. Honduras' Congress voted to install a new president, Roberto Micheletti, the next in line under Honduras' constitution, and a member of the same Liberal Party to which Zelayla belongs.

New elections, Micheletti said, should be held in November, as scheduled -- or sooner if that would ease tensions. As for the decision to expel Zelaya from the country, that must be understood, he explained, "in the context of genuine fear of Mr. Zelaya's proven willingness to violate the law and engage in mob-led violence."

Nevertheless, President Obama was quick to denounce Zelaya's ouster and -- echoing Chavez, Castro and Ortega - demand that he be reinstated. Senior White House officials threatened sanctions if Honduras' legislature, courts and military refuse to do as told. More than $18 million in military and development assistance already has been suspended.

Contrast that with the White House response to the massive election fraud that recently took place in Iran: President Obama said he did not want to be seen as "meddling."

He eventually did express his preference for Iran's dissidents over those beating, arresting and killing them -- though many saw his support as a day late and a dollar short.

In recent days, Secretary of State Hillary Clinton appears to have begun to restore a modicum of coherence to the administration's position on Honduras. She has criticized Zelaya - who last weekend set up a "government in exile" in Nicaragua - as "reckless," and she seems to be supporting attempts by Costa Rican President Oscar Arias to mediate the conflict within the Honduran government. Micheletti has said he will cooperate with such mediation if the goal is "a peaceful solution that is consistent with Honduran law in a civil society where even the president is not above the law."

These are not the only examples of what Mackubin Thomas Owens, editor of Orbis, the quarterly journal of the Foreign Policy Research Institute, calls Obama's "disturbing propensity to curry favor with our adversaries at the expense of our friends."

The Czechs and Poles are now "are rightly concerned that they will be sacrificed on the altar of better U.S. relations with Russia," Owens wrote. "And the Israelis fear that the Obama administration's desired opening to the Muslim world will be achieved at their expense."

In particular, Obama has been pressing Israeli Prime Minister Benjamin Netanyahu to make unilateral concessions to Mahmoud Abbas, president of the Palestinian Authority.

The predictable result: Abbas has hardened his stance. One of his deputies, Kifah Radaydeh, said in a recent television interview: "[O]ur goal has never been peace. Peace is a means; and the goal is Palestine. I do not negotiate in order to achieve peace." And PA Member of Parliament Muhammad Dahlan this month said in another TV interview that Palestinians have a "legal right" to terrorism.

"Change" was one of Obama's principal campaign themes, so he was bound to try new foreign policy approaches. He may have been misinformed about who staged a coup against whom in Honduras. He may have believed that "outreach" would be sufficient to "re-set" relations with Russia, and that the prospect of "engagement" would induce Iran's rulers to give up their nuclear ambitions. He might have thought he could persuade Palestinian leaders to meet Israelis half way. He may have figured that North Korean dictator Kim Jong Il would rather feed his people than launch missiles, and that in a post-Bush era Hugo Chavez would be eager for rapprochement.

But in these and other cases, Obama's policies have collided with harsh realities. If Obama is as smart as advertised, he'll learn, and he'll adjust. If not, America's friends will grow colder while its enemies will grow bolder. And, over time, we will have fewer of the former and many more of the latter.