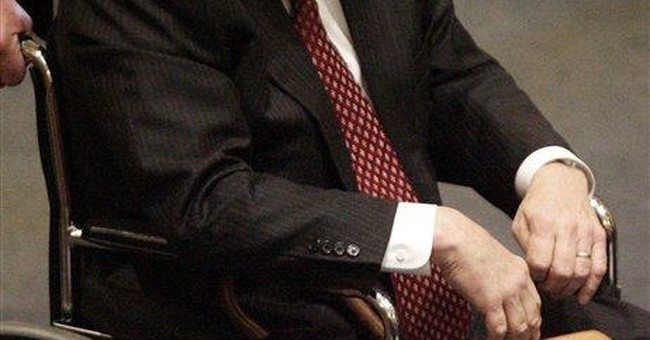 The headline on CNN was "Cheney Attacks!" Correspondent Tom Foreman commented that "even in the bare- knuckle world of Washington these days, this was a remarkably sharp attack by the former vice president just weeks into President Obama's term."

And how had the former vice president expressed his fabled bellicosity this time? In an interview with Politico.com, he warned that there is a "high probability" that, in the years ahead, terrorists will attempt to use a nuclear or biological weapon to mass-murder Americans.

Cheney said he was concerned that the Obama administration may discard some of the policies that have defeated such attempts since 9/11/01. As he put it: "When we get people who are more concerned about reading the rights to an al-Qaeda terrorist than they are with protecting the United States against people who are absolutely committed to do anything they can to kill Americans, then I worry."

The guests on one CNN program thought that an outrageous comment (with a single exception: me). Who would really insist on reading terrorists their rights? But a front-page headline in the Washington Post recently announced: "Bush's ‘War' On Terror Comes to a Sudden End." If there's no war, terrorist suspects cannot be "unlawful enemy combatants"; they must be treated instead as suspects in criminal justice proceedings. Such suspects are legally entitled to "Miranda warnings" - they must be informed, for example, that they have a "right to remain silent." On what basis could there be an exception?

That wasn't the only flank on which Cheney "attacked." He also said he worried about Obama's decision to shut down the detention facility at Guantánamo. Those incarcerated there, he said, "are evil people." He cited intelligence reports revealing that at least 61 of the detainees released from Guantánamo during the Bush administration have "gone back into the business of being terrorists."

He might have added that 11 of the 85 individuals now on Saudi Arabia's "most wanted" list have been released from Guantánamo as well. They were sent back home where Saudi authorities put them through an anti-jihadi rehabilitation program - unsuccessfully, as it now turns out.

Further, Walid Phares, a senior fellow at my think tank, the Foundation for Defense of Democracies, reports that on-line Islamist chat rooms have been discussing Obama's expected releases from Guantánamo -- predicting that those set free will be "not only well received and made into heroes but will become the leaders of the jihad (al-Qaeda and others) against the United States, the West and moderates in the region."

The man Poltico.com calls "arguably the most controversial" vice president in history, concluded with this: "The United States needs to be not so much loved as it needs to be respected. Sometimes, that requires us to take actions that generate controversy. I'm not at all sure that that's what the Obama administration believes."

Can it get any more shockingly bare-knuckled than that? Is it any wonder that, as Politico.com put it: "Many of the top Democratic legal and national security players have long viewed Cheney as a man who became unhinged by his fears?"

In light of all this, it is worth noting that President Obama has given himself at least a year to figure out how to close Gitmo. That suggests he's aware that neither releasing detainees abroad nor bringing them to the U.S. is an ideal solution. He's also taking several months to study the use of military commissions as an alternative to trying terrorists in civilian courts.

Regarding interrogations, the Obama administration has ruled out torture. But so, too, did the Bush administration. The question is: How do you define torture? Obama has yet to decide whether all methods involving stress and duress - not just water-boarding -- should be prohibited in all cases, even those involving terrorists believed to possess life-saving information about imminent attacks.

Marc Thiessen, who served in both the Bush White House and the Defense Department, has been adamant that coercive interrogations were "singularly responsible for stopping al-Qaeda from flying planes into the Library Tower in Los Angeles, Heathrow Airport, and London's Canary Warf, and blowing up apartment buildings in Chicago, among other plots." Cheney told Politico.com that evidence eventually will be made public indisputably establishing such connections.

The Obama administration has no current plans to end renditions - a practice utilized during the Clinton/Gore administration (with no protests that I can recall) before being adopted by Bush and Cheney (with administration critics up in arms and a Hollywood movie exposing the dastardliness of the practice). Indeed, the Obama Justice Department has defended the Bush administration's assertion of the state-secrets privilege in a rendition case in the Ninth Circuit.

In the end, Obama may make unwise and, indeed, lethal decisions on all of these policies as Cheney fears. But as a senator, he voted to restore to America's intelligence agencies the power to eavesdrop on terrorist suspects abroad - after initially opposing the bill along with House Speaker Nancy Pelosi, who for four months blocked House members from voting on it.

Since then, the Foreign Intelligence Surveillance Court of Review -- the federal appeals court created to rule on questions involving national security surveillance -- has reaffirmed that the Fourth Amendment's requirement for warrants does not apply to the foreign collection of intelligence, even if that intelligence involves Americans.

The former vice president did not talk about all this in his interview with Politico.com. Perhaps he decided that to do so would be seen by his critics as crossing the line from mere attack to barbarian rampage.