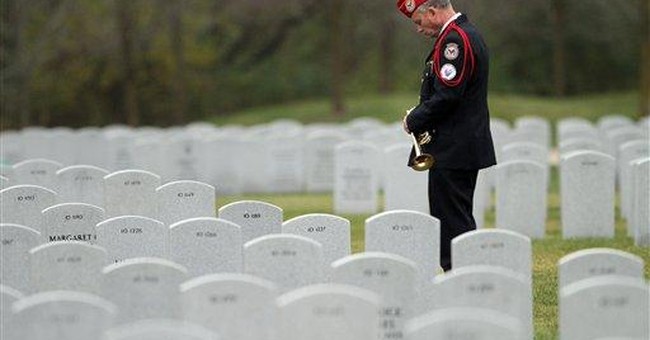 While the military still is reeling and recovering from the massacre at Fort Hood, my wife, Gena, and I decided to boost the morale of military personnel by visiting the cadets at West Point and the wounded warriors at Brooke Army Medical Center, at Fort Sam Houston. Little did I know that Maj. Nidal Malik Hasan, the shooter at Fort Hood, was hospitalized there.

The day before Veterans Day, we visited West Point. We were amazed by its pristine and picturesque setting, 50 miles north of New York City on the Hudson River. It was also fascinating to learn more about the academy's history. From the day of its founding, March 16, 1802, West Point has produced some of our country's greatest leaders, including Grant and Lee, Pershing and MacArthur, Eisenhower and Patton, Schwarzkopf and Petraeus, etc.

It was inspiring to watch the cadets' unyielding commitment to develop their minds, bodies and spirits. It was also a joy to see this international Corps of Cadets take a little time even to have fun with my tough-guy image and reputation. For example, one of the senior cadets, named Taylor, had a picture of me in a frame but with his name inscribed underneath it. A French cadet with a very heavy accent spoke on behalf of other French comrades and read aloud this Chuck Norris "fact": "When an episode of 'Walker, Texas Ranger' was aired in France, the French surrendered to Chuck Norris just to be on the safe side." He then followed it up by stating, "We'll surrender if you take a photo with me and my fellow French cadets!" Of course, I obliged.

There are few words to express the awe and inspiration Gena and I felt as we spent the day with the cadets at West Point. As I sat speaking to a large group of them for about 45 minutes, I was taken aback by their resoluteness and willingness to grow. Guided by the academy's timeless motto, "Duty, Honor, Country," their passion, discipline and fortitude for building the next generation of leaders was vividly clear and renews my hope for America's future.

We were equally inspired a couple of days later, when we went out to Brooke Army Medical Center to visit with America's wounded warriors. How can one put into words the pride one feels around these brave men and women? Despite the loss of limbs or suffering from some other sacrifice in battle, their resolve and class were off the charts. They were enthusiastic and grateful about our visit, but it was my wife and I who were truly blessed and inspired by them.

Then came a moment that would have been completely surreal if it had not been a staggering reality. As we were visiting the burn unit, we discovered that Maj. Nidal Malik Hasan, the shooter at Fort Hood who murdered 13 and wounded another 30, was being treated in the same facility. To be honest, it made me sick to my stomach and sent shivers of disgust down my spine.

If ever I have experienced a polar opposite, it was in the moment when I was thinking about how Hasan is the sheer antithesis to the character, commitment and service of all the other men and women we met at West Point and Fort Sam Houston. I was equally moved by the civic servants and military medical staff, many of whom knew victims of this assassin yet turned immediately around and became his caregivers. They are exemplary models of the patriot and Founding Father Thomas Paine, who said, "He that would make his own liberty secure must guard even his enemy from opposition; for if he violates this duty, he establishes a precedent that (eventually) will reach himself."

We also visited Brooke Army Medical Center two years ago and recall meeting a young soldier by the name of David, who had just been flown in from Iraq and was in the intensive care unit suffering from burns that covered more than 90 percent of his body. Two years later, David came walking down the hospital corridor to greet us. We were overjoyed to see him again, and we could tell that he felt the same seeing us, though his gravely burned face was not able to muster even a smile. We again shared some choice, heartfelt moments with David. I couldn't help but say to him, "David, you are absolutely one of the toughest soldiers I have ever met." Even then, he tried to smile as he quipped, "Tougher than Chuck Norris?" "Yes," I replied. "You're much, much tougher than I am!"

It's in times like these that I'm also grateful for military chaplains and the work of men like retired Lt. Col. Brian Birdwell, who was burned on more than 60 percent of his body when hijacked American Airlines Flight 77 collided into the Pentagon on Sept. 11, 2001. After more than 30 surgeries, Birdwell now uses his life to bring hope to others (FaceTheFire.org). His story also is told on pages 42 and 43 in my friend Randy Alcorn's latest best-seller (which provides help for those struggling through pain and difficulty), "If God Is Good," a copy of which I will be sending to David along with Birdwell's book, "Refined by Fire." My hope is that Birdwell also drops by to visit David when his very speaking schedule takes him again by Fort Sam Houston.

The night before we left for Brooke Army Medical Center, our 8-year-old twins drew pictures and wrote encouraging letters on their own initiative and asked us to give them to wounded warriors. Gena gave my daughter's letter to David. He reached out and received it with his two bandaged and handless arms and then read the letter (in my daughter's own writing and phonetic spelling, I might add):

I am very sorry you are hurt, but thank you for helping our contry. I'm going into military school just like you guys did. I hope you guys get better.

As the Scripture says, "From the mouths of children and infants, you have created perfect praise."