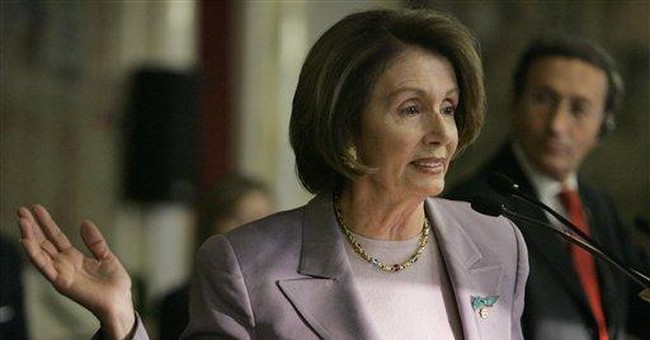 There they go again! The House and Senate have buried us in yet another bailout-stimulus heaping pile of fiscal dung -- a $789 billion loan that has been tacked onto our children's (and children's children's) already staggering $10-plus trillion deficit. Are you just going to sit there and take another one up the tailpipe?

Should I just shut up and be grateful that Republicans squashed the $200 million to re-sod the National Mall in Washington and purchase a new Coast Guard polar icebreaker? Sure tastes like the same ol' partisan and political punch to me. (Remember when, in 1988, President Reagan vetoed a bill because it had six earmarks in it?)

And what about you? The average hardworking American citizen? The middle-class blue-collar worker? You'll get a whopping $13 increase to your paycheck. Now there's change (as in coins) we can believe in. And we'll have to believe, because only faith and a miracle will turn that $13 increase into a catalyst to jump-start the economy. Is that the change you were hoping for?

How does one fight an administration and a Congress that believe "only government" is the answer? Is it really true that in the absence of government intervention and doling out another trillion dollars of debt our nation would certainly experience an economic holocaust? Former President G.W. Bush pushed the first trillion-dollar bailout upon America. Nothing happened. Obama now has pushed the second trillion-dollar bailout upon America. Why should we believe there won't be a third, fourth, fifth or sixth so-called government stimulus? What other recourse do they have?

We're in the tank for trillions. And Congress' only solution is to print more money and make more loans. The House is constantly telling the American people to spend, spend, spend, while saying nothing about living within their means. The Senate tries to save every financial institution, rather than allowing the reasonable death of some under a diminishing supply and demand.

Our presidents repeatedly attempt to jump-start the last and highest revolution of the credit merry-go-round by refilling the gas tanks of financial institutions for one more go-round. But why? To lend to those who are already maxed out on monthly payments? Or is it the unemployed who are now supposed to borrow the big bucks? We must quit bailing out what we've borrowed. As George Washington said, "To contract new debts is not the way to pay for old ones."

There are only two things that are going to get us out of this particular financial mess, and only Americans (not "only government") can implement those solutions. Both come down to one word: restraint.

The late financial guru Larry Burkett prophesied almost 20 years ago in his book "The Coming Economic Earthquake" that an economic calamity was coming upon the U.S. unless a drastic effort was made to curb massive federal spending and the soaring deficit. Burkett was right. And he gave one basic principle to avoid the future market meltdown: "Don't be a slave to debt! Get out of debt!" Burkett is still right today. That is why I devoted the entire economic chapter in my book "Black Belt Patriotism" to how to "Stop America's Nightmare of Debt," both nationally and personally.

In my wife, Gena, and my most recent interview, I explained that if we are going to reawaken America, we have to return to our Founders' principles, which include fiscal prudence. We must follow the advice of those like Thomas Jefferson, who warned long ago, "To preserve (the) independence (of the people), we must not let our rulers load us with perpetual debt." (Now read that again, then one more time.)

How do we do that? We cap our spending and allow the supply-and-demand levels to lower to points commensurate with our incomes (not credit lines). We must learn to downsize and live within our means, and not borrow excessive amounts, even for investment debt like a home or business. We must cut spending, reduce our budgets, pay down our debts, and stabilize our homes and nation.

As for that clueless Congress, we must demand our representatives seek a balanced-budget amendment to the Constitution, which will keep the government living within its means. We must return to a pay-as-you-go government and nation. It's our last resort for an out-of-control economy. Thomas Jefferson once said, "The maxim of buying nothing but what we had money in our pockets to pay for (is) a maxim which, of all others, lays the broadest foundation for happiness."

If our country is to survive, we must elect only those who show proof of fiscal discipline, refuse under all circumstances to increase our national deficit, and commit to pass and live under a constitutional amendment for a balanced budget. And if our incumbents voted for the bailouts or bail on their fiscal frugality, then vote them out of office the next chance you get.