Butting Heads at the Border 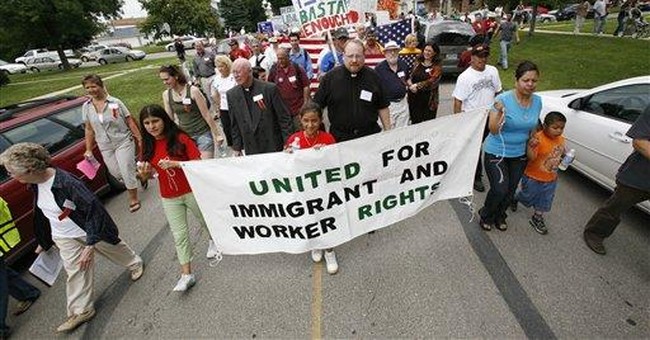 This past week, a 10-year veteran of the U.S. Border Patrol shot and wounded a man in the left buttock who assaulted agents at a violent stretch of the U.S.-Mexico border. Despite the fact that the man was among a group that was trying to enter the United States illegally and was throwing rocks and concrete chunks at agents, officials at the Mexican Consulate in San Diego are criticizing the agent and demanding the U.S. conduct a full investigation. Consul General Remedios Gomez Arnau said: "Any kind of shooting toward Mexican territory is rejected by the Mexican government. They should have waited for response of the Mexican authorities."

Are you kidding me? Do I smell another Compean-and-Ramos case in the making? Do illegals think border crossing is nothing more than a game of cat and mouse? Do Mexican officials think we only are playing "rock, paper, scissors" at the border? When will we finally draw a line in the sand and stop this insanity at our nation's boundaries? When will we back our agents and their Bill of Rights? When will we give them the complete resources, permission and support they need to carry out their duties fully?

Supervisory Border Patrol Agent Daryl Reed reports that there have been 330 assaults on agents already this year, compared with 254 reported incidents in 2007. It's time for our government to ante up and protect and secure our borders and agents better.

Border security is so critical, of course, because it is about far more than just illegal immigrants. It affects the transport of drugs, weapons, gangs (such as MS-13) and terrorists, and it even affects issues surrounding national sovereignty. That is why I address our border troubles as one of eight major problems threatening America most in my upcoming (Sept. 7 release) book, "Black Belt Patriotism," which is available for pre-order at Amazon.com. In the book, I give my critique of what is destroying our country and offer my solutions for rebuilding America and restoring the American dream. In particular, I lean heavily upon our Founders' work and wisdom, looking to them for possible solutions to our present problems. In the next couple of columns, I'll be giving readers a few first-seen excerpts from the book.

Here's a glimpse from the chapter "Secure and protect our borders," in which I also give (but not here) my solutions to deal with the 12 million or so illegal immigrants already residing in America:

"A few years ago I had the opportunity to fly along America's borders with my good friend John Hensley, who was the assistant commissioner of U.S. Customs. We flew on a Black Hawk helicopter and checked out locations along the California border, where there was heavy traffic of drug dealers and illegal aliens coming into the United States from Mexico.

"As we were flying over the desert, we landed in the middle of nowhere. We stepped out of the helicopter and John asked me, 'What do you see?' I replied, 'Absolutely nothing but desert.' As soon as I said that, up popped U.S. border agents, who were hiding in holes covered by beige tarps that blended in with the terrain. They were waiting for illegal traffic trying to sneak into our country. I thought, what dedication this takes to hide out here in this intense heat for hours at a time -- just waiting.

"There's no doubt that Americans possess the resources and passion to close off our borders and ports from illegal immigration and contraband. If we can overthrow another country, we ought to be able to protect our own. Yet to this day, our national borders and ports of entry are like lattice work with plenty of holes through which illegals now come in.

"I don't lay the blame on our dedicated border agents. But I do blame an overly bureaucratic government that still has not given agents the proper resources and permissions they need to get their job done. I also blame government for undermining national security by being more concerned with global commerce than national sovereignty. They would rather please the international masses than enforce our own laws.

"Let's ask ourselves, why is Congress not securing our borders? Could it be they have greater global goals that will ultimately dissolve this Union? Whether intentionally or not, government has failed for decades to secure the borders. It is up to us to make sure it gets done, by taking several points of action that I'll be outlining in this chapter. The time is now. And if we don't do our part, America as we know it will dissolve like a sugar cube in coffee. From the coastland to the heartland, we will lose our distinctions and no longer even recognize our country. As President Ronald Reagan said, 'A nation without borders is not a nation.'"