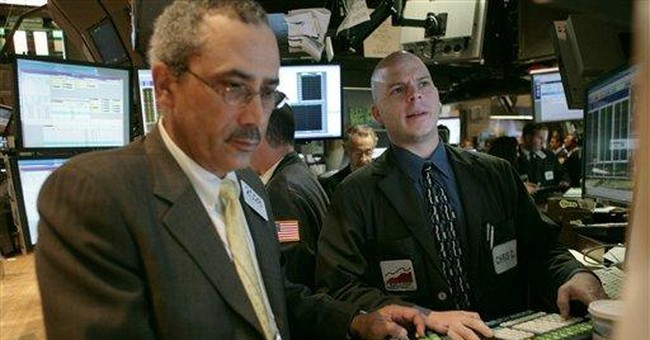 Presidents can say the strangest things in front of an open microphone, especially if he thinks the mic is not on. Take President Reagan’s famous quip back in 1984, when he said shortly before his weekly radio address, “My fellow Americans, I’m pleased to tell you today that I’ve signed legislation that will outlaw Russia forever. We begin bombing in five minutes.”

Well, just last week, President Bush was caught making a candid comment at a private gathering. When asked about the cause of the global credit crisis, the president responded, “There is no question about it. Wall Street got drunk.” The president paused, and said, “That’s one reason I asked you to turn off your TV cameras.”

Well, oops, the TV cameras might have been off, but someone caught the episode on a mobile phone camera. But I am glad they did. Because, in his snappy comeback, the president hit the nail on the head. As the president went on to explain, “[Wall Street] got drunk and now it has a hangover. The question is, how long will it (take to) sober up and not try to do all these fancy financial instruments?”

As Heidi Moore writes in the Wall Street Journal, there is an even stronger explanation than drunkenness for Wall Street hawking “fancy financial instruments.” Worse than being drunk—what happened, she explains, is that “thousands of traders and executives that pumped up the credit boom made specific decisions to buy ever more collateralized debt obligations. They saw competitors making a mint and followed suit. If they were under the influence of anything . . . it was greed.”

And lenders, knowing someone else was buying their mortgages, urged people to take them whether they could pay them back or not.

The problem was greed unchecked by any moral restraint.

So where are we after years of unrestrained greed on Wall Street, coupled with a lack of prudence on the part of individual lenders and borrowers? Well, the U.S. economy is, to put it mildly, shaken, as is the world economy. Second, due to the unscrupulous behavior of a few, the Fed, the SEC, and Congress are ready to step in and regulate the markets more than ever.

I guess I could say, “I told you so.” For months I have argued on “BreakPoint” that the cause of the market meltdown was moral failure. Free markets—capitalism itself—can thrive only when corporations and individuals exercise moral restraint. When those restraints fail, government regulation is sure to follow; which, in turn, makes free markets less efficient, and certainly less free.

President Bush has often said he gave up drinking when Christ came into his life. Well, Wall Street and the greedy mortgage brokers might invite Christ in to help them recover their own morality.