2014 Farm Bill Conference Report: Bigger and More Bloated than Before 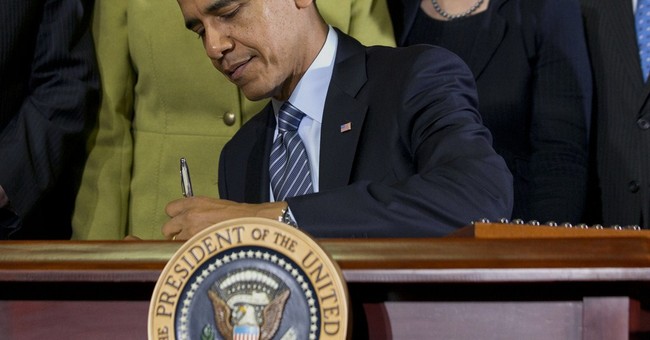 After meandering through Congress for the past two years, the Farm Bill unceremoniously made its way to President Obama’s desk for his signature this past week. Crafted by House Agriculture Committee Chairman Frank Lucas and Senate Agriculture Committee Chairman Debbie Stabenow, this 950-page deal reconciles the differences in the versions of the Farm Bill that passed the House and the Senate this past summer. Although proponents heralded this deal as a money saver, this latest deal is actually bigger and more bloated than its predecessors.

This doublespeak on the spending levels arises from the problematic way Washington scores the bill: Even though Congress reauthorizes the Farm Bill every 5 years, the Congressional Budget Office (CBO) scores it over 10. This enables Congress to increase spending in years 1-5 and push the savings to years 6-10. These savings will never be realized since Farm Bill programs will expire after year 5 and we'll be on to the next Farm Bill by then—one that, like its predecessors, increases spending in the early years and pushes the phantom savings to the later years.

Consider the recent Farm Bill conference report as a prime case in point. Proponents claim that the deal would reduce direct spending by $16.6 billion over the next 10 years. But a closer at the CBO score reveals that 74 percent of the savings happen in years 6-10. These savings will be on paper only.

These budget gimmicks overlook the fact that the 2013 Farm Bill dramatically increases spending in the early years. In 2014, for instance, the Farm Bill conference report increases budget authority by over $3 billion over 2008 farm law. This is a dramatic increase.

When Washington fails to provide an honest account for how much the federal government spends on food and farm programs, it reduces the chance of reform. It hides the fact that this conference report is chock full of corporate welfare for politically-connected agribusinesses and unchecked nutrition spending. As a result, we spend more and more with each Farm Bill reauthorization. As federal spending grows increasingly out of control, American taxpayers deserve a more complete and honest analysis of what goes into these ever-growing spending bills.

A better and more accurate way to measure Farm Bill spending is to look at the CBO baseline plus new funding outlays over five years. Using this figure, we see that the 2013 Farm Bill spends more than ever. Over five years, inflation-adjusted actual spending on the 2002 and 2008 Farm Bill came in at $257 billion and $427 billion, respectively. Projected spending on the recent Farm Bill conference report exceeds this—over the same period, the deal comes in at $489 billion in total spending.. That’s twice the size of the 2002 bill.

This most recent Farm Bill reauthorization presented Congress with an opportunity to control federal spending and cut the corporate welfare in farm programs. Unfortunately, Chairman Lucas, Chairwoman Stabenow, and their colleagues in Congress failed to achieve any fundamental reforms in the food and farm programs in the conference report. Instead of enacting reforms now, they merely kick the can further down the road. Unfortunately for American taxpayers, they’re locked into another 5 years of broken Farm Bill spending before Congress gets another shot at reform.