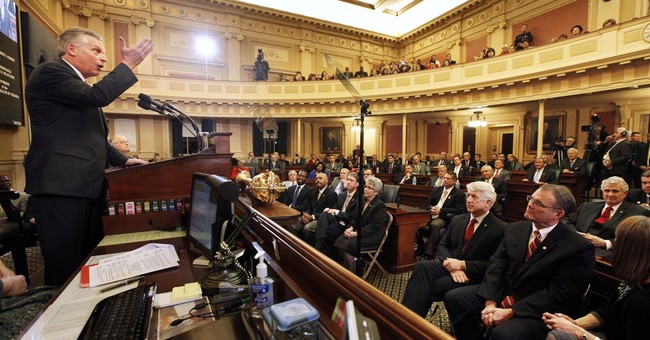 Last week Virginia Governor Terry McAuliffe announced his intention to proceed with Medicaid expansion even without the General Assembly’s approval. After revealing a more modest plan this week, his approach is less certain. But one thing is clear: if lawmakers surrender to executive bullying, they will do far more damage than saddling the state with dependency and debt. They will be complicit in an act of lawlessness.

Abusing the legislative process has become part and parcel of rolling out the Patient Protection and Affordable Care Act (also known as Obamacare). Since it became law in 2010, the Obama Administration has delayed, waived, or otherwise ignored key provisions of the Act over two dozen times. Flouting Congress’s distinct directives and precise deadlines, the President has decreed legislation by press conference, unilaterally altering the law to suit his momentary whims.

Unfortunately, Obamacare’s epidemic of lawlessness is spreading to the states.

When it ruled two years ago that Washington could not force the states to inflate their Medicaid rolls, the Supreme Court restored states’ historical role as protectors of healthcare freedom. By rejecting Medicaid expansion, states could control their own budgets, reduce federal spending by hundreds of billions of dollars, and halt a critical component of the federal takeover of the health care industry.

Virginia lawmakers saw that Medicaid expansion is a raw deal for Virginians. That’s why the General Assembly explicitly rejected it, prohibiting any expenditure of funds on the program unless the legislature gives the green light.

But in a move reminiscent of the President’s “pen and phone” strategy of enacting legislation without Congress, Governor McAuliffe snubbed the people’s representatives, proclaiming he would be “moving forward” with expansion plans and not “waste any more time on a process.”

Yet that process is a fundamental feature of the rule of law, not a bug. The federal and state constitutions protect the people from arbitrary rule by establishing a thoughtful, deliberative legislative procedure subject to checks and balances. Subverting these critical constitutional protections breeds inconsistency, unfairness, and unpredictability.

Whether Virginia should expand its Medicaid program is a policy question that is properly left to the political process. But that process must operate within the confines of the state Constitution.

The Virginia Constitution requires all spending to be appropriated by the General Assembly, the branch of government closest to the people. Strong-arming the legislature into submission – or ignoring their will entirely – is an abuse of power that sets disastrous precedent for Virginia’s future.

Governor McAuliffe would do well to heed the words of fellow Virginian and Father of the Constitution James Madison, who forewarned, “Enlightened statesmen will not always be at the helm.” It is precisely because our policy preferences differ and our political leaders change that we must respect the rule of law. Enabling lawmakers to skirt the rules when enacting desirable legislation also empowers them to do the same when a law is detrimental.

The General Assembly is slated to convene on September 18 to review its options. Rather than kowtow to the demands of the executive branch, the legislature should stand firm and send a resounding message to those who would trade constitutional protections for political expediency: “Our state operates under the rule of law, not by the whims of politicians.”