Chris Talgo
|
Posted: Nov 03, 2020 12:01 AM
Share   Tweet
The opinions expressed by columnists are their own and do not necessarily represent the views of Townhall.com. 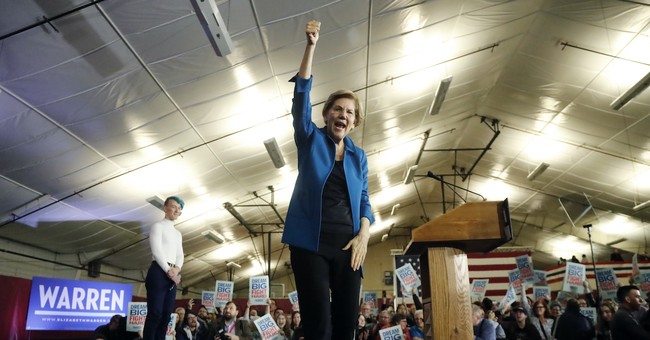 Before Joe Biden became the presidential pick for the Democratic Party in the 2020 election, many of his opponents weighed-in on whether or not they think the Electoral College should be replaced with a national popular vote in future presidential contests.

Here is a small sample of some of their responses:

Sen. Corey Booker (D-NJ): “I believe very simply that, in presidential elections, the person with the most votes should be the president of the United States.”

Sen. Elizabeth Warren (D-MA): “Every vote matters — and that’s why I have called for an end to the Electoral College in favor of the national popular vote movement.”

Pete Buttigieg: “We need a national popular vote. It would be reassuring from the perspective of believing that we’re a democracy.”

Sen. Bernie Sanders (I-VT): “I believe that it is hard to defend the current system in which one candidate receives 3 million votes less than his opponent, but still becomes president … I believe that we need to reexamine the concept of the electoral college.”

Sen. Kamala Harris (D-CA): “I'm open to the discussion … I mean, there's no question that the popular vote has been diminished in terms of making the final decision about who's the president of the United States and we need to deal with that.”

As if several sitting senators and a key Biden surrogate (Buttigieg) wanting to abolish the Electoral College was not enough to cause fear among Americans who understand the value of the system that we’ve used to elect every president to date, consider this ominous fact: 89 percent of Democrats agree.

For comparison sake, according to the same Pew Research Poll, only 23 percent of Republicans favor a national popular vote.

According toSen. Lindsey Graham (R-SC), “The desire to abolish the Electoral College is driven by the idea Democrats want rural America to go away politically.”

In general, Graham is right. The Electoral College does give weight to rural voters, which is one of the many reasons the Founding Fathers included it as the mechanism to choose the president.

It also provides a voice in the national election of the president to the states, small states in particular.

As James Madison articulated in Federalist 39, “the executive power will be derived from a very compound source. The immediate election of the President is to be made by the States in their political characters. The votes allotted to them are in a compound ratio, which considers them partly as distinct and coequal societies, partly as unequal members of the same society....From this aspect of the government it appears to be of a mixed character, presenting at least as many FEDERAL as NATIONAL features.”

The Electoral College, despite misconception, also ensures that the United States does not devolve into a mobocracy. This sentiment was eloquently stated by Alexander Hamilton in many of his post-Constitutional Convention writings.

As Hamilton penned in Federalist 68, “The choice of SEVERAL, to form an intermediate body of electors, will be much less apt to convulse the community with any extraordinary or violent movements, than the choice of ONE who was himself to be the final object of the public wishes. And as the electors, chosen in each State, are to assemble and vote in the State in which they are chosen, this detached and divided situation will expose them much less to heats and ferments, which might be communicated from them to the people, than if they were all to be convened at one time, in one place.”

There are several more reasons that the Founding Fathers inserted the Electoral College into the Constitution as the instrument to elect the nation’s commander-in-chief.

However, no matter the fact that the present system is a bulwark against a mobocracy, in which large states and urban centers determine the presidential election, Democrats oppose it because it has stifled them from controlling the White House in a few recent elections.

One would hope that the Democratic party would not want to tear down the system for choosing the president, which has been in place for more than two centuries, simply because they have been defeated in two recent elections. However, as their own words demonstrate, this is not the case.