Chris Talgo
|
Posted: Feb 24, 2020 4:30 PM
Share   Tweet
The opinions expressed by columnists are their own and do not necessarily represent the views of Townhall.com. 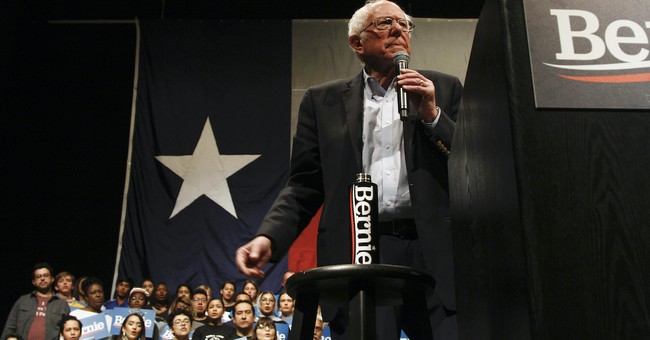 Coming off the heels of his big victory in the Nevada Caucus, Sen. Bernie Sanders (I-VT) sat down for an interview with Anderson Cooper for the CBS newsmagazine 60 Minutes. The discussion touched upon several topics, including Sanders’ highly touted democratic socialist policies.

Yet, despite the best attempts by Cooper to glean information about Sanders’ stance on several issues, the savvy socialist seemed unwilling to go into depth about many of his controversial comments and what his vision of America would actually entail.

For starters, when asked, “What is democratic socialism?” Bernie dodged and weaved a la Muhammad Ali v. George Foreman.

Sanders responded, “When Donald Trump was a private businessman in New York, he got $800 million in tax breaks and subsidies to build luxury housing. That’s called corporate socialism. What democratic socialism is about is saying, ‘Let’s use the federal government to protect the interests of working families.’”

Sanders completely avoided defining democratic socialism. Instead, he pivoted into an attack against President Trump and then waxed rhetorically about the federal government helping hard-working families. Unfortunately, Cooper failed to press Sanders on what exactly his political philosophy actually means.

Later in the interview, Cooper questioned Sanders about the cost of his programs. Cooper set up the question, “There’s profound skepticism in Congress about Sanders’ ability to get his agenda passed. Two-thirds of Democrats in the Senate have not signed on to “Medicare for All,” which would cost an estimated $30 trillion to $40 trillion over ten years. And that’s just one of Bernie Sanders’ many proposals. There’s also free public college, cancellation of all student debt, a federal job guarantee, and a Green New Deal to rapidly reduce carbon emissions.”

When simply asked, “How much will that cost?” Sanders’ answer was literally laughable.

“Obviously, those are expensive propositions, but we have done our best on issue after issue—in paying for them,” Bernie said.

Sorry Bernie, but if you want to pass legislation that would cost tens of trillions of dollars, “we have done our best … in paying for them” is not good enough. This is not a first-grade spelling bee, where everyone gets a trophy for trying their best.

As if that answer was not bad enough, it got even worse, if you can believe it.  When asked, “Do you have a price tag for all of these things?” Bernie’s reply was rather telling: “No, I don’t.”

Just in case you are wondering, the combined cost of Bernie’s programs is close to $100 trillion over the first decade, $97.5 trillion to be exact, give or take a few trillion.

At the end of the interview, Sanders unveiled a new program—universal child care and pre-kindergarten—which would cost $1.5 trillion over the next decade. When asked how he would fund this new program, Sanders dismissively responded, “We have a tax on wealth to pay for that.”

Upon close examination, Sanders’ reply should send shivers down the spine of every single American. A tax on wealth, which is what Sanders is calling for, is unconstitutional and flies in the face of everything America stands for.

In this response, Sanders unwittingly revealed what he really wants to do. Of course, Bernie wants to tax the you-know-what out of billionaires and corporations. That we know. However, when he starts talking about a tax on wealth—not on income—Bernie reveals his true socialist bona fides.

A tax on wealth is as unAmerican as it gets. Then again, remember that this is coming from the same guy who praised Cuba’s Fidel Castro and Venezuela’s Hugo Chavez, and chose to honeymoon in the Soviet Union—not exactly the most romantic destination on the planet.

Yet, for Bernie, a full-fledged socialist who pretends to be a “democratic socialist” (whatever that means), is there anywhere in the world that could make his heart tingle more than the now-defunct Union of Soviet Socialist Republics? Apparently not.