Chris Stigall
|
Posted: Jul 25, 2019 12:01 AM
Share   Tweet
The opinions expressed by columnists are their own and do not necessarily represent the views of Townhall.com. 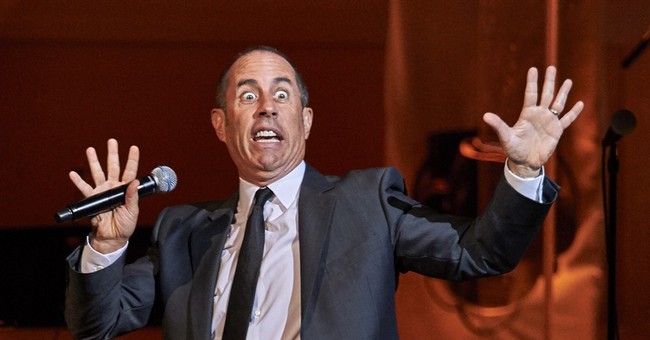 Seinfeld has become the bravest comedian of our time and anyone who loves comedy owes him a debt of gratitude.

It’s getting harder to find comedians who take risks. By risks, I mean saying things they’re not “supposed” to say to a clapping seal audience.

I’ve long written about the court jesters of late night who’ve been all too content to tell jokes which appeal only to the left. Affirming their hatred for a figure like Donald Trump is easy, but ignoring the obvious flaws of people like Barack Obama and Nancy Pelosi is even easier. Frankly, it’s lazy.

Now it’s gone beyond political figures, of course. Everything from race to gender to sexuality is considered verboten or a comic will face the wrath of certain woke audiences, particularly on college campuses where kids learn to be offended before they get out of bed.

In dozens of interviews with comics I’ve personally conducted over the years, nearly all of them will whisper to me off-air – many on-air – the era of grievance has made comedy impossible in places once considered the most open-minded and hospitable to edgy comedy: the college campus.

While many in comedy seem content to retreat, Jerry Seinfeld isn’t going away quietly. He’s standing up and pushing back.

I first noticed it in an interview from early February 2014 on “CBS This Morning.” Seinfeld was asked why his new hit “Comedians in Cars Getting Coffee” didn’t feature more comics of color.

“I have noted the guests are mostly white males, ” said the joyless scold conducting the interview.

Seinfeld’s response was blunt and made me sit up straight. “This really pisses me off. People think it’s the census or something. This has gotta represent the actual pie chart of America? Who cares? Funny is the world that I live in. You’re funny, I’m interested. You’re not funny, I’m not interested. I have no interest in gender or race or anything like that.”

In an interview with ESPN the following June of 2015, Seinfeld echoed similar sentiments. Specifically, his concern young people are taking offense too easily. “I don’t play colleges, but I hear a lot of people tell me, ‘Don’t go near colleges. They’re so PC,’” Seinfeld said.

“[Young people] just want to use these words: ‘That’s racist;’ ‘That’s sexist;’ ‘That’s prejudice.’ ... They don’t know what the hell they’re talking about.”

This time the totalitarian, PC culture had enough with Jerry and fired a shot across his bow. The Huffington Post published an article attempting to explain to Seinfeld why certain jokes just can’t be allowed any longer because our culture has changed.

One of Seinfeld’s good friends went too war to defend him. HBO’s “Real Time” host Bill Maher invited fellow comic Jeffrey Ross on his show to debate Seinfeld’s comments and the “woke” reaction.

It was Ross who said something that made me first begin to think of Seinfeld as an important figure in more ways than just comedy. He said it was refreshing to see someone, "who is not necessarily considered an 'edgy' comedian, stand up for comedy as an art form."

That inadvertently stimulated a thought in me. Seinfeld isn’t just funny. He’s important. Important, not because his comedy is blue or edgy or naughty, he’s important because he’s the biggest star in the genre and the only one safely positioned for combat with the culture.

Jerry Seinfeld is subtly leading the charge against the cesspool of the aggrieved, PC culture trying to hijack our laughs. In doing so, he’s providing cover to comics of all levels of fame and all political stripes.

Most of all, he can do it because he’s independently wealthy and famous beyond belief. No one can hurt him. He’s the most powerful man in comedy. He may not have asked for the job, but he’s the only man who can fight this fight for his peers.

In August of 2018, “the Federalist” writer Ellie Bufkin also noticed this in Seinfeld in a piece called, “Seinfeld Is A Respite From The Insufferable Wokeness Of Comedy.”

One of Seinfeld’s great friends, Chris Rock retweeted the column and tagged it with, “Thank God for Jerry.” Rock, a fearless and dominant voice in comedy, seemed to confirm my feeling about Jerry, too. “Thank God he’s doing this. We need him now,” I interpreted Rock’s tweet to say.

The latest season of “Comedians in Cars” was just released on Netflix and it’s another triumph of a season. Guests like Martin Short, Eddie Murphy, Matthew Broderick, and Ricky Gervais are just some of Jerry’s guests who leave you wanting more.

The Gervais episode demonstrates yet again Seinfeld’s willingness to poke the wokeness of 2019. In a conversation about why Ricky loves New York where “no two people are the same, “ Seinfeld responds, “That’s true everywhere. Where are any two people the same?”

Gervais grins widely, but before he says a word Jerry jumps right in to answer his own question. “China maybe?”

The pair burst into laughter.  A running theme throughout the remainder of the two-part episode is whether or not Jerry will have the fortitude to leave that joke in the show or cut it out before it airs.

Of course, we ultimately have our answer. He left the joke in. But the show featured a really important discussion. Through laughter, these comedy stars were having a lengthy debate about what’s okay to say in comedy today.  With his classic devil-may-care indifference to correctness, Seinfeld made the discussion of a stereotype-based joke the central theme of the episode.

It wasn’t heavy, but it was important. More than important, it was brave. Seinfeld has amassed great power and influence in entertainment. He needs neither money nor the approval of anyone anymore. He’s an untouchable, invincible comedy superhero.

Like Spiderman, with great power, Jerry has taken on a great responsibility. He’s standing up for language and jokes as the culture chases many comics off the stage and into submission.

But like his favorite superhero, Superman, Jerry Seinfeld is standing up for “truth, justice, and the American way.”  There’s nothing more American or more important than free speech.  And as Jerry’s said himself, comedy is the ultimate justice.

Jerry Seinfeld has come to save comedy.