Chris Poindexter  |  Jul 18, 2011
The opinions expressed by columnists are their own and do not necessarily represent the views of Townhall.com.
Top Columns
Trending on Townhall Media 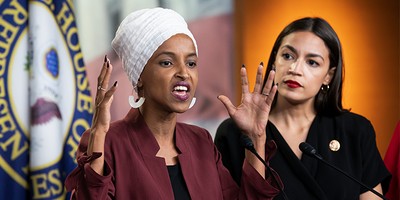 Truthfully, the government keeping control of our currency is not all bad.  There was a time when different entities in this country issued a variety of currencies.  It was economic chaos.  The federal government stepping in to issue a central medium of exchange solved a lot of problems for a growing nation at the time.

Today we’re in a situation where government has kind of bungled the currency thing.  Not just the U.S. government, most of them, actually.  The tragic part is the free market is just itching for a chance to help and there’s no reason government and private industry can’t cooperate for the benefit of both.  Unfortunately, things are off to a rocky start because the government declares anyone using a medium exchange as circulating currency is breaking the law.   The federal prosecutor for the Western District of North Carolina, Anne M. Tompkins, an Obama appointee, went as far as to equate it with domestic terrorism.

The Liberty Dollar was the one Anne Tompkins labeled as domestic terrorists and in March of this year Bernard von NotHaus, producer of the private currency, was found guilty of various counts including making counterfeit coins.

In fairness to the Feds, the warehouse receipts, which could be exchanged for real gold and silver by the bearer, did look a lot like currency.  Though they did not say “legal tender” anywhere, they were marked “NEGOTIABLE”, were denominated in U.S. dollars and it probably didn’t help that the company starting the private currency was openly at odds with the Federal Reserve system.

Bitcoins are more problematic for the feds but also pose problems as a private medium of exchange.  Bitcoins are actually complex digital tokens tracked by a distributed network of independent servers secured behind high-tech encryption.

Bitcoins don’t claim to be currency of any type, have no backing by any commodity, or central managing authority.  The absolute number of bitcoins are limited by the available computing power in the world.  The more bitcoin that are created by networks of number-crunching computers, the longer it takes to run the calculations to create new ones.

Just because they have no intrinsic value hasn’t stopped exchanges from popping up on the internet where they can be traded for actual cash, with some trades as high as $18.  Due to their nature, bitcoin trades are virtually impossible to track or trace.

What brought bitcoin to the government’s attention is a web site called Silk Road where users can trade bitcoin for real illegal drugs.  The feds went ballistic at that expression of free enterprise, but it’s not clear if bitcoins themselves are actually illegal.  The other question is even if the feds could find a legal basis to challenge bitcoin, the question reamins if it would be possible to stop a network of anonymous, encrypted, independent servers.

Another problem, although bitcoins are almost impossible to hack, the exchanges are a much softer target.  Major exchanges have been hacked twice and MtGox was offline for over a week trying to unwind all the trades in hacked accounts.  Such a vulnerability would be a non-starter in global markets.

Somewhere between the openly antagonistic Liberty Dollar and the shadowy hacker world of bitcoin, there has to be a happy medium.  The world is crying out for a convenient and trusted currency backed by a physical commodity.

Such a currency would not have to be at odds with the government or antagonistic to legal tender.  In these days of high speed computers it would be possible for private and government issued currency to exist in relative harmony, with very little regulatory oversight.

Trying to find that harmonious balance is difficult these days.  For one the government is trying to track every dollar to make sure none of it ends up in the hands of terrorists or criminals.  A laudable goal but ultimately impractical and unworkable.

The other fear is that any such medium of exchange would ultimately replace our own currency.  Okay, so what?  As long as that displacement happened over a long enough time frame and the government gets its share of the deal in the form of taxes, what’s the problem?  Isn’t that what the free market is all about?

Ultimately, if our government does not consider allowing the development of some type of digital currency backed by commodities, someone else will.  Another government, or a private company operating in a country that doesn’t care.  If it was developed and managed properly, it would be almost impossible to regulate.

Our government can cooperate in the effort to the benefit of everyone, or watch it start somewhere else and spread to our shores in an unregulated wave.  That’s not much of a choice if you ask me.