In an exclusive interview with Townhall Magazine, readers get up close and personal with the conservative talker who is shaking up the political system.What has been the secret of his success? What does he want to accomplish with his newest best seller, "Arguing With Idiots"? What made him a conservative? What does he read? Will he ever run for office? We asked him all of this and much more for this interview that you can read only in Townhall Magazine.And Beck isn't the only conservative powerhouse featured in the November issue. We also want the world to get to know . . . the American people. There is a grassroots movement that is changing the nation. Liberals love to deride it. Politicians ignore it at their own peril. We feature it in the latest issue of Townhall Magazine.Also in the November issue, we take a look at the man who created the Obama-the-Messiah image and what he's up to now, and we detail the Left's favorite war—the War on the CIA. And our cover story examines what's going on with Iran's nuclear ambitions, what Israel's options are, and what would be the fallout if Israel takes out the Mullah-led regimes nukes. Who benefits? Should the U.S. be involved?If you order today, we will give you a FREE COPY  of Glenn Beck's "Arguing With Idiots" or Sarah Palin's yet-to-be-released "Going Rogue."

In "Taking on the Left . . . One Idiot at a Time," conservative radio and TV host and best-selling author Glenn Beck talks to Townhall Magazine about the state of conservatism and America in an EXCLUSIVE interview.

Glenn Beck must be effective. How else would we explain the hatred the Left is spewing and the criticism he gets from Democratic and Republican elected officials?Not just anybody can earn the scorn of everyone at MSNBC—Keith Olbermann, Rachel Maddow, Chris Matthews, ad naseum—and vitriol from the usual suspects at the Daily Kos, Huffington Post and Media Matters and be criticized by policymakers from both sides of the aisle, all in the span of just a few months.And for what?Telling the truth.

This interview is available only in the pages of Townhall Magazine.
***

With her feature piece, "Firmly Planted," Townhall Magazine contributing editor Meredith Jessup offers an honest look at the grassroots movement at tea parties and town halls across the country that are anything but "Astroturf." The message for the government is coming across loud and clear as we see true Americans concerned about their country's future—and they are making a difference.

A shrinking faith in a growing government has turned ordinary Americans into outspoken activists. Millions of average Americans have gathered in small towns and big cities across the country to evoke the same grassroots revolutionary spirit that propelled America to her independence more than two centuries ago. …What all of the town hall protesters and tea partiers have in common is a viewpoint vastly different from the prevailing opinions of Washington. The idea is a new twist on America's old promise—Americans can govern themselves and choose how to spend their own time and money. It's the idea of self-destiny; it's the idea that each person decides for himself where his trust rests—in God, not government. It's the idea that the Constitution has been and always should be the rules by which government operates, restricting government intrusion and ensuring freedom for the people.These ideas were revolutionary in 1773, when protesting colonists ditched British tea into Boston Harbor. Americans today may not drink as much tea as they used to, but in light of a government that has evolved over the last two centuries, these ideas of liberty once again seem like radical viewpoints.

David Axelrod created the messianic image of Barack Obama that swept the far-Left team into the White House. In "He Built This President," Fred Lucas examines what has happened to the message machine now that they're in office.
***

Frequent Townhall contributor Peter Brookes, who served in the Central Intelligence Agency, goes after the Left for their continued assault on our intelligence community in "CIA Clash."You would think with hot wars in Iraq, Afghanistan and on Terror, the Left would rule out declaring war on the CIA, too, one of this country's key intelligence collection and analysis organizations.
***

The Iranian regime continues to defy the world with its nuclear ambitions. If Israel were to attack the nuke sites, as many observers believe could happen soon, who benefits? And should the United States play any part in military action? Larry Kelley, who has written several powerful pieces for Townhall Magazine, examines those questions, and more with his cover story, "We're All Infidels Now."

Shortly after his inauguration, President Obama sent an unpublicized letter to the Iranian government. The letter was exposed when Iranian President Mahmoud Ahmadinejad publicly wrote back, "We say to you that you are in a position of weakness. Your hands are empty. You can no longer promote your interests from a position of strength." Dore Gold, former Israeli ambassador to the U.N., commented, "What the administration saw as a magnanimous gesture was seen as total weakness by the regime in Tehran."For thousands of years, the attempt at appeasement is a recurring factor in the fall of civilizations. When appeasement is attempted by a state that is confronted by an outside aggressor, the attempt is not only fruitless but it is a signal to the aggressor that the time to strike is now.Our president's recent cancelation of missile defense treaties with two close allies, Poland and the Czech Republic, must look to Russian Prime Minister Vladimir Putin and Ahmadinejad like a kind of doubling down on naked appeasement and perhaps an entry into our own Peace of Philocrates.If Israel attacks the Iranian sites, who benefits?The short answer to the above question is: Western Europe, Egypt, Saudi Arabia, Jordan, Pakistan, India, the oppressed Iranian people and, most especially, the United States. This is a large list of beneficiaries, given the fact that the Israelis would no doubt be universally condemned for their attack, should it occur. 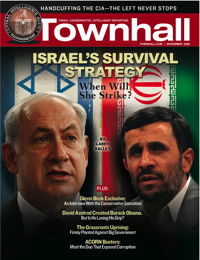 Also in the November issue:

*Meet the two young conservatives who dared take on ACORN*Obama's ‘Diversity Czar' wants fewer whites in media*S.E. Cupp details why it's not the Right with ‘anger issues' but the unhinged Left*Time to send back up to our Marines in Afghanistan*Ashton Kutcher pledges his allegiance . . . to Obama*Mary Katharine Ham goes after elected officials who ignore even their most basic duties*Tim Pawlenty makes presidential waves*Your tax dollars go to a foreign luxury car maker*Hank Williams Jr. doesn't hide his feelings about the president*Two college football coaching legends tout conservatism*How the New Depressionomics of our government will only make things worse.. . . And much more.