Grist for the Grill: To Question Sotomayor 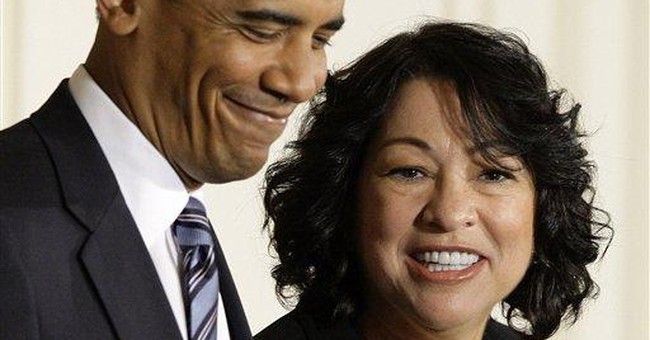 When the Senate Judiciary Committee begins grilling Supreme Court nominee Judge Sonia Sotomayor this week, one question will almost certainly not be on the agenda. Ironically, it is the question that is most important to President Obama, if his statement about the main quality he seeks in a high-court appointee is anything to go by.

Obama told Planned Parenthood’s national conference in July 2007 that, if elected President, the criteria he would use to select Supreme Court judges would be their personal feelings – specifically, their ability to feel “empathy.” In fact, the least appropriate question for Judge Sotomayor would be about her personal feelings on Planned Parenthood’s core issue – abortion – or on any other politically charged issue that may come before the Supreme Court.

What Americans need to know is whether Sotomayor is capable of deciding cases based on constitutional principles, apart from whether she “empathizes” with plaintiffs or defendants. Discerning her suitability for the high court will require senators to ask questions that will bring the core of her judicial philosophy into sharp focus. A look at questions asked of the last two Supreme Court nominees gives clues as to what to ask – and what not to ask – as the senators seek to discover the intellectual approach the nominee would bring to the bench.

Both Chief Justice John Roberts and Justice Samuel Alito made it clear during their confirmation hearings that asking nominees to state their personal opinion on any hypothetical case, or to make a commitment on how they would decide a case, is inappropriate. Roberts’s response to then-Sen. Joe Biden (D-Del.), on judicial involvement in end-of-life decisions showed he understood that, as a judge, individual opinions and feelings should not control his decisions.

ROBERTS: “No, I’m not going to consider issues like that in the context as a father or a husband or anything else.”

Likewise, neither Roberts nor Alito were willing to make commitments on how they would decide cases on controversial topics. Justice Alito stated, in response to questions from Senator Kohl about abortion: “[I]n light of the current state of litigation relating to the issue of abortion . . . I don’t believe that it’s appropriate for me to go further than that. . . .”

While Judge Sotomayor should not be called upon to state whether she thinks Roe v. Wade should be reversed, she should be asked whether she acknowledges that since the Supreme Court took the right to regulate abortion away from Americans, more facts about fetal development have come to light. We now know, for example, how early the heartbeat and brainwaves begin. Can she evaluate the changing landscape related to abortion with an open mind, and a philosophy grounded in the laws of our country?

By contrast, questions not only ethically acceptable, but vitally necessary to reveal Sotomayor’s understanding of constitutional principles, would direct Sotomayor to explain her view of the judge’s role. Senators should ask Sotomayor about her understanding of the limited constitutional role that judges serve, as well as the methodology that she would use when deciding cases before the Supreme Court. They should also seek out her views on interpreting the Constitution – specifically whether new “rights” may be “found” in its language. They should also ask her to explain what she meant when she said “personal experiences affect the facts that judges choose to see.”

It is also appropriate to ask Sotomayor to explain her statement that she supports maintaining “settled law.” Does she simply mean that she respects precedent, or does she believe that the Court should never revisit past decisions, even to reverse itself when it becomes clear that it overstepped its bounds into policy making?

Under questioning from Pennsylvania Sen. Arlen Specter, who supports legalized abortion, Roberts accurately described how to examine whether a precedent should be overturned:

ROBERTS: “The principles of stare decisis look at a number of factors, settled expectations . . . whether or not particular precedents have proven to be unworkable . . . whether the doctrinal bases of a decision have been eroded by subsequent developments. “... I do think that it is a jolt to the legal system when you overrule a precedent . . . . It is not enough that you may think the prior decision was wrongly decided.”

However, he added, “[T]he principles of stare decisis recognize that there are situations when that’s a price that has to be paid.”

Sometimes reversing “settled law” is the best way to serve our democracy and maintain the Court’s legitimacy. No one would argue that it was wrong for the Court to reverse Dred Scott v. Sandford and Plessy v. Ferguson. Nominee Alito stated it well when he told the committee that sometimes stare decisis can be overcome. It is, he said, “not an inexorable command.”

A nominee’s judicial philosophy goes to the heart of her qualifications to serve on the Court. Judge Sotomayor has said she sees judicial impartiality as an "aspiration." But impartiality is not merely an aspiration. It is a discipline, and its necessity is enshrined in both federal law and the judicial oath. The American people deserve to know whether Judge Sotomayor will faithfully apply our laws or whether she will direct policy that fits her own agenda.