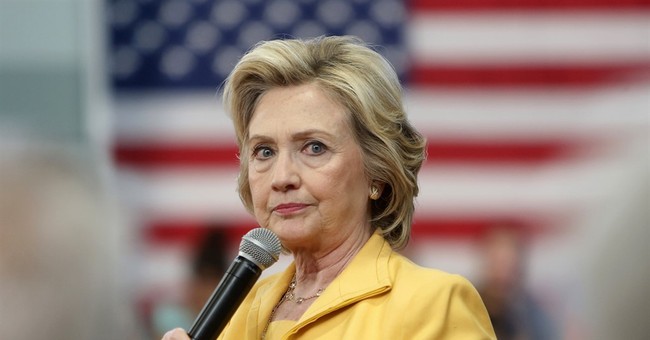 When Hillary Clinton climbed the stairs to board her Dessault Falcon 900 B aircraft--which burns 347 gallons of fossil fuel an hour--on the heels of delivering a rousing speech on fighting global warming, the air suddenly became thick with hypocrisy.

Twitter took note, with one Tweeter opining that "reducing your carbon footprint only applies to serfs not political royalty. #doublestandard."

Well, Mrs. Clinton's transportation is definitely not econo-class. Mrs. Clinton's ride was a 19-seater, French-made beauty that reportedly rents for $5,850 an hour. It ferried Marie An--oops!--Mrs. Clinton from Iowa to New Hampshire, a luxurious flight of about two hours and fifteen minutes.

If you peruse the Daily Mail pictures of the jet, you'll see the attraction of this particular model, which Mrs. Clinton reportedly has flown before: the well-appointed interior is perfect for hosting "dinner parties high above the clouds," and you never have to worry about being stuck in that uncomfortable middle seat. There are no middle seats in the inaccessible world of our political upper class. Jacksonian democracy this ain't.

Somebody in the Clinton campaign obviously did that move from the V-8 ad, when the guy hits his forehead upon remembering something really obvious: It’s a little unseemly to burn up a month’s worth of carbon using a lavish jet for a global warming event. They at least have to make the episode carbon neutral.

An aide quickly informed CNN, ""This campaign will be carbon neutral. We'll be offsetting the carbon footprint of the campaign and that includes travel." Mrs. Clinton's campaign made the same promise in 2008.

Based on how the first Hillary presidential campaign tried to become carbon neutral, I think I know the program we can expect. It doesn't involve turning off lights, selling the Gulfstream and flying commercial, or other boring things like that. It will revolve around “carbon offsets.”

A company that sells carbon neutral offsets calculates just how much your pollution should cost you and you pay that money to them to use for some worthy project. In other words, as Wikipedia has explained, purchasers of offsets reduce their carbon footprints "through proxies who reduce their emissions and/or increase their absorption of greenhouse gases."

To give you an idea of the cost of buying offsets, Hillary Clinton's first presidential campaign paid a reported $80,000 to be green. That doesn't seem to me a lot of money for what must have been a lot of flying around the country and staying in luxury hotels, both for Mrs. Clinton and myriad staffers. But it was a short campaign. Somebody should keep tabs on the current Clinton campaign's offset prices for 2015 and 2016.

Global warming activist Al Gore, you'll recall, made a lot of money championing an offset company. Gore--who at the time had three houses with headline-making utility bills--had a Yellowstone-sized carbon footprint. He bought offsets from his own company, which sure beats going from room to room switching off the lights.

Don't get me wrong about the kinds of programs offset companies often support. Many of them are worthy and should be pursued purely to help people in need. Many projects, for example, provide for water filtration for people who live where clean water is scarce. Such projects provide humanitarian benefits and must be undertaken regardless of what is believed about global climate change.

I looked at the website of The Carbon Neutral Company, which has offices in the U.K., and U.S., and works with such companies as Avis, Marks and Spencer, and about 350 other businesses in thirty-five countries. It is an award-winning company that was started in 1997 and claims to "have contracted more than eight million tons of carbon from 240 projects across thirty countries."

There are videos of the company's endeavors, including biodiversity projects aimed at preserving animal habitat, planting trees in Kenya, and paying for eco-stoves, and insulation blankets (so you won't create pollution getting warm).

All these projects seem eminently virtuous. Nevertheless, I am sure that Hillary is not cooking on an eco-stove at her Washington, D.C., house or the one in Chappaqua, New York. When granddaughter Charlotte visits, she won't be swaddled in extra clothes to prevent her polluting the environment in a base attempt to get warm. The Clintons will just turn up the heat.

If you really are worried about global warming, regard it as a deadly threat, and want to rewrite the rules governing the economy in order to address it, it seems like you ought to be willing to make some sacrifices yourself rather than just paying poor people to make sacrifices for you.

Many of the measures that Mrs. Clinton and others advocate to stave off global warming will prevent the Third World from developing to the point where the poor have jobs and can buy some of the luxuries that those of us in the developed world take for granted.

Not that Mrs. Clinton only wants the poor in the Third World to make sacrifices. She also expects sacrifice here at home, just not from people like her. She refused to answer a question about the Keystone XL Pipeline the other day. That project could create more jobs for Americans who want to work but, though vetted again and again and found to have negligible potential environmental impact, remains unpopular with affluent environmentalists, including many Clinton supporters.

Perhaps those supporters will feel better about the Clinton campaign’s carbon offset program. But the rest of Americans are likely to have a different take: It’s yet another example of liberal hypocrisy, wanting the rest of the world to live by rules they’d never consider for themselves.