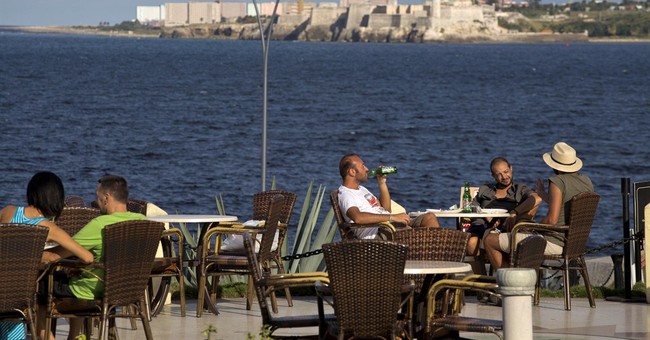 In his allegorical children’s story “The Zax”, Theo Geisel (nom de plume Dr. Seuss) writes of a pair of imaginary Zax’s, one of whom will only walk south, never sidestepping east or west, and another who will only walk north with the same obdurate attitude about directional change. As luck would have it, these two Zax, while walking through an empty field, find themselves face-to-face with one another. With both refusing to take a step to the side, they stand there, face to face, for years as city and roads build up around them.

With that children’s standoff in mind, life improved upon literature this week as the south facing American Zax has decided to take a step to the “right” and allow the north-facing Cuban Zax to take a step forward into the 21st Century. Dr. Seuss would be proud. If only President Obama had spoken in rhyming anapestic tetrameter cadence when he made his announcement Wednesday that the United States would begin the process of normalizing relations with Cuba.

It has been almost 54 years since the United Sates ended diplomatic relations with Cuba. A year later John F. Kennedy ended trade relations with the rogue island nation. The thought process ran along the lines of if we isolate Cuba from the most powerful economic nation in the world that is only 90 miles off its shore, the Castro’s will surely crumble under the pressure in very short order. Unfortunately, the Castro’s and their Communist utopia have taken longer to die than a Lane-Bryant clad opera singer.

It’s time for a fresh approach.

In restoring elements of trade, travel, and tribute between the United States and Cuba, President Obama is giving the people of Havana and its rest-of-the-island suburbs a chance to consume a state-poured dose of freedom. A look back at the collapse of Eastern Europe is instructive to predict what is going to happen next.

It was in January of 1987 that Soviet leader Mikhail Gorbachev announced his plans for glasnost (openness) and perestroika (restructuring) to the Communist Party of the Soviet Union. Gorbachev recognized that the imposed slavery in Russia and the satellite states had created profound difficulties in keeping up with the rest of the world’s advances. Perhaps, he thought, letting in just a little bit of freedom and reform would be the trick to creating an invigorated empire?

Two and one half years after Gorbachev announced the plans and began to let Easterners sip from the chalice of Capitalism, the Berlin Wall opened and four years later the Soviet empire was dead. If Socialism creeps, Capitalism sprints.

Now before passing out party hats to celebrate the inevitable liberation of the Cuban people, an acknowledgment needs to be made and an incongruity identified.

First let me speak to the Cuban people, living here or elsewhere, who view this new initiative as being one of caving in to Castro and making the two generation-long struggles, sufferings, tortures, imprisonments, and executions of their family members and friends seem irrelevant and forgotten. To you this must seem like the American abandonment of South Vietnam after so many American soldiers had died trying to protect its sovereignty; their decade-long sacrifice vaporized in moments. Let me suggest to you that this is different. In that case, American betrayal led to the bad guys being able to win. In this case, what might feel like American betrayal will ultimately lead to the bad guys losing and the Cuban people living lives that the Vietnamese can’t even imagine 40 years later. The forthcoming freedom should have a longer run than the preceding oppression.

Then there is the almost inexplicable embracing of freedom and free markets being shown by a President who on his best day can’t even begin to hide his distaste for individual freedom and Capitalism. Whatever Barack Obama’s motives are for this opening let us not for a minute let him lead us to believe it is because he loves liberty. Every Obama administration action since he took office has been hostile to free commerce.

Perhaps once he concludes new arrangements with Cuba, the President might take time to turn his attention to the United Sates and grant us some economic freedom, as well.

Capitalism’s most contemporary champion, Milton Friedman, famously said economic freedom is a necessary prerequisite for personal freedom. He argued the most effective way to liberate oppressed people of any nation, of any culture, was to let them catch the scent of free trade and have them follow their nose. Cuba is about to have their olfactory sense overwhelmed. Even the slightest opening from the United States will have an incredible impact on the people of Cuba as they have been so isolated for so long.

And then all hell breaks loose.