Athletes of the World Unite! 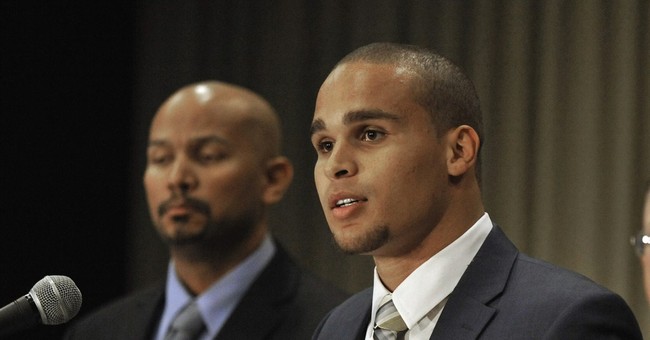 During the recently-ended NFL playoffs one of the stories was the play calling at the line of scrimmage of Denver QB Peyton Manning with his frequent barking of “Omaha-Omaha” carrying some cryptic message to befuddle defenses (given the outcome of the Super Bowl, perhaps he should have barked “Omaha Beach” ). The Omaha Chamber of Commerce used the exposure to generate publicity for the city.

Now channel H.G. Wells and move forward 15 years to a yet-to-be played college football game where the next generation of would-be Manning quarterbacks stand at the line of scrimmage and shout “Scab…Local 364….Pickett, Pickett…Hike”! If those signals sound incongruous with college football to the reader then keep reading.

On Wednesday the Chicago Region of the National Labor Relations Board (NLRB) approved the request of 28 players from Northwestern University to form a union for college athletes. The NLRB found that the University in contesting the filing failed to meet the burden of justifying its decision to deny its football players employee status. In finding this, the NLRB applied the common law “right to control” test, which considers what level of control an employer has over an alleged employee under a variety of factors.

In January when the motion was filed, Northwestern quarterback Kain Colter told the Chicago Tribune "A lot of people will think this is all about money; it's not. We're asking for a seat at the table to get our voice heard." Despite Colter’s take on a Jesse J. tune singing “it’s not about the money, money”, the formation of unions in this country has always been about the money with other considerations so thin a veil that Beyonce’ would be embarrassed to wear it.

When the players first filed their petition they enumerated a list of goals for the organization. Given the reputation of Northwestern for high academic standards you would expect the points to be quite well organized. And they were. Listed first was to “minimize the college athlete’s brain trauma risks”. Now who can argue with that given today’s publicity of post-concussed horror stories? Next on the list, buried at number two, was to “raise the scholarship amount”. Well, credit the petitioners. They at least licked the Tootsie Pop once before crunching through the hard candy to taste chocolate.

The American experience with labor unions is often romanticized, especially for their halcyon days of the early to mid-20th century. But as Salvador Dali warned us “The difference between false memories and true ones is the same as for jewels; it is always the false ones that look the most real; the most brilliant”. The labor movement in the United Sates, starting in earnest right after the Civil War, has also been marked by violence and corruption. All premises for union formation eventually can be distilled to the need to organize workers to stand up and fight with management in order to get more of something while having to do less of something. Fights are often bloody.

So now the college athlete enters the world of the United Steel Workers (can we predict new materials forthcoming for helmets and shoulder pads?) the organization that funded this exercise. To be clear, the flaws in the current NCAA structure as it relates to college sports in general, and football in particular, are undeniable. Hypocrisy abounds with arbitrary rules about eligibility and with the unseemly influence of alumni and boosters. Hubris abounds. As an example, just a day before the NLRB ruling The Associated Press reported that Ohio State athletic director Gene Smith will receive an $18,000 bonus because Buckeyes wrestler Logan Stieber won a NCAA championship last week. That said is the formation of a labor union something that will lead to a solution? Won’t it simply lead to more confrontation and greater levels of hypocrisy as students and universities pretend they are not businesses while behaving exactly like businesses?

In insightful remarks made right after the decision, Fox News contributor and “The Five” regular Dana Perino suggested that if the players are going to be considered employees then maybe the NFL will respond by developing farm leagues similar to Major League Baseball. Given the robust health of college football its death seems irrational to predict. That said, a single spore can lead to pandemic. In the not so distant future, team pennants may be replaced with signs screaming “equal pay for equal play”. At least football is played in autumn so no conscientious objector needs worry about lacing up on May Day.