Charles Vavruska
|
Posted: Mar 31, 2019 12:01 AM
Share   Tweet
The opinions expressed by columnists are their own and do not necessarily represent the views of Townhall.com. 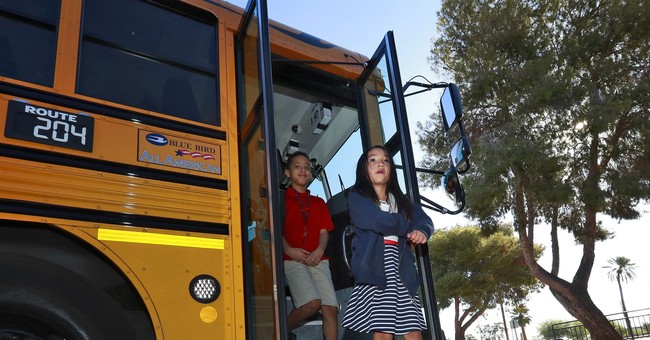 The article cites a chart with 1971 Board of Education data, which the so-called “Paper of Record” published at the time. “In the 1970s, the specialized schools were overwhelmingly white,” Shapiro misleadingly states. “Today, they are mostly attended by Asian-Americans, many of whom are low-income immigrants.” While data from the 1971 chart show Brooklyn Tech enrollment to be 12 percent black, easily obtained data from the New York State Education Department’s website show that black enrollment at Brooklyn Tech increased from 38 percent in 1976 to 49 percent in 1979. By no stretch of the imagination could anyone conclude from the data that Brooklyn Tech was “overwhelmingly white” in the 1970s.

Also, 1971 was the year when the New York State Legislature passed the Hecht-Calandra Act, which codified the Specialized High Schools Admissions Test (SHSAT) in law. As the Times put it “For the nearly fifty years since, students have to ace the entrance exam to win a seat at a specialized school.” With data showing Brooklyn Tech’s black population expanding throughout the 1970s and remaining the largest demographic at 38 percent in 1991.  And in 1991, 20 years after Hecht-Calandra, this 38 percent black share of the student body was more than double the white population of 16 percent. Thus, one cannot conclude that the same test explains today’s lower black enrollment.

Logically, other possibilities should be considered. The New York Post recently quoted black Brooklyn Tech alumni who thanked gifted programs for preparing them for the SHSAT and easing their admissions. These advanced programs for particularly talented students once thrived in almost every school. Alas, Left-wing “anti-tracking” advocates drove them out of many schools in the 1990s.

New York City Council Member Robert Cornegy (D – Brooklyn) wrote NYC Schools Chancellor Richard Carranza on March 20 and called for black children to enjoy expanded access to gifted and talented programs. “...nearly 60 percent of the middle schools that sent students to specialized high schools were in districts that had gifted and talented schools” Cornegy states, “...unequal investment in enrichment for students of color might be the most significant contributing factor to the city’s problem of diversity in specialized high schools.” Cornegy also contradicts the Times narrative “As recently as 1989, Brooklyn Tech, for example, was 51 percent black and Latino. As enhanced academics for high-potential students was eliminated in those communities, the percentages of students of color decreased to the point we are at today. We know students can compete successfully if given the resources. They have done it before. They can do it again.”

The objective and merit-based SHSAT has yielded an extremely successful student body. The Specialized High Schools have produced 14 Nobel Prize winners — more than most countries. Rather than scrap the SHSAT, logic argues for other solutions to increase black enrollment at these Specialized High Schools. The data clearly hold the SHSAT blameless for the post 1980s fall in black enrollment at these campuses. Many point instead to the removal of gifted and talented programs from so many Big Apple schools. Mayor de Blasio's plan to dump the SHSAT and impose quota-based admissions is a political scheme to cover up the Department of Education's failures. This would do nothing to improve education. Restoring gifted and talented programs in every school and in every neighborhood would boost learning for high-achieving students and likely increase black enrollment at these great high schools. And tomorrow’s black students who enter Brooklyn Tech, Stuyvesant, and the rest will secure their seats the old-fashioned way: They will earn them.