Charles Payne
|
Posted: Feb 22, 2017 12:01 AM
Share   Tweet
The opinions expressed by columnists are their own and do not necessarily represent the views of Townhall.com. 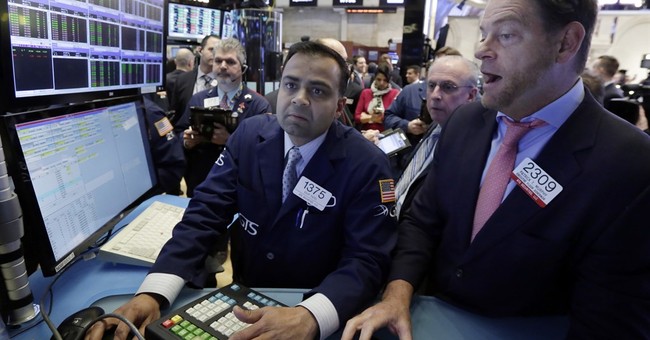 Nothing great was ever achieved without enthusiasm.

The market naysayers and prognosticators that make a living from predictions of doom and gloom made a living under President Obama even as the market crashed. People that followed their advice dumped stocks while hoarding canned goods.  And now, these same prognosticators who always get soapbox platforms are facing a different challenge as they preach that “the end is near.”

The 2017 stock market is shaping up to be one for the ages. In many ways, it reminds me of 2013 when the Dow rallied 27% on a combination of extraordinary accommodation by the Fed (it impacted the market the last year) and a general sense that finally, the worst was over.

Fast forward to 2017, and there is a similar one-two punch.  In fact, it’s the stimulus from real economic activity that will include corporate investments and renewed consumer spending, coupled with a general consensus that the best is yet to come.

In order for this to work, there must be execution, but there must also be a cheerleader. We all know President Trump is a seasoned CEO. For the sake of economic prosperity and the stock market, CEO stands for Chief Excitement Officer.

Trump was on full display when he spoke at the Boeing plant in South Carolina as the market was heading for an uninspired loss for the session on last Friday.  His speech left thousands of American workers on their feet cheering and screaming “U.S.A.!”  Those cheers reverberated beyond the plant and triggered the market that had already inclined to rally into the close.

Who buys stocks after a major rally into a three-day weekend?

The market took off, and the S&P 500 joined the NASDAQ into the plus column; a race against the clock saw the Dow finish in the green on Friday.

Speaking of enthusiasm, what’s happening with tech stocks is amazing but it’s not irrational. The world is moving into a period that once only crossed the minds of science fiction writers, such as Isaac Asimov.   The S&P Technology Sector (XLK) is on a record run of a closing session, and up almost 8% year-to-date.

Ironically, the more the market goes up, the more the bears that made short bets will actually help because there are being taken out on their shields daily.  At least they have skin in the game.  Beware of boo-birds looking to sell you a book or a radiation suit, and remember: nothing great was ever achieved without enthusiasm.

The three-day weekend allowed many to peak at their 401K and other stock market investments. Many will cheer, and others will wonder if this is too good to be true.  I’ve already heard from a lot of those folks via e-mail and social media, saying “Charles, I am thrilled but this market has to correct soon.”  Of course, this potential dilemma is even more frustrating for those without 401Ks or stock market investments.

Actually, getting in just in time for a big pullback or correction is frightening for them, but I suspect that part of that fear is more about their ego than their wallets. People have been so afraid of getting egg on one’s face that they have missed an opportunity of a lifetime.  And that’s really the point when you stop thinking about the market as a day at the track; it’s more of a lifelong endeavor where there is less angst over period pullbacks.

As for the market, there is no doubt that changing hands above historically high averages, the highest level since 2004, and a 17. 6 forward price-to-earnings (forward P/E) ratio isn’t significantly above the 25-year average of 15.0.

More importantly, the economic momentum from employment to manufacturing has picked up at a faster pace than the stock market.  Moreover, corporate earnings this season underscore momentum that not only justifies the rally but it also hints at more of the upside.  According to FactSet Data, this past weekend, 82% of S&P 500 companies posted results and here are the key numbers:

This week’s earnings will give us a glimpse into consumer spending.  Before the opening bell, earnings from pivotal names include the following:

Walmart (WMT), whose shares peaked back in January 2015, has seen its stock make a series of lower highs as earnings consensus has drifted. The company is no longer a pure proxy for consumers because of its faulty internet operations, but we can glean a lot on lower-income folks.

Home Depot (HD) is a monster. The stock closed at an all-time high on Friday, but the Street is looking for $1.33. It might need a beat, considering the recent run in the shares.

Macy’s (M) reported, but it underscores the continued demise of department stores reflected in last week’s 3.2% year-to-year decline for the segment.

Cracker Barrel (CBRL) could bring good news to restaurants, which have suffered from food deflation. I think the stock is also a good proxy for American sentiment, which has been soaring.

A Trump-DeSantis 2024 Ticket? Trump Doesn't Rule It Out
Sarah Arnold