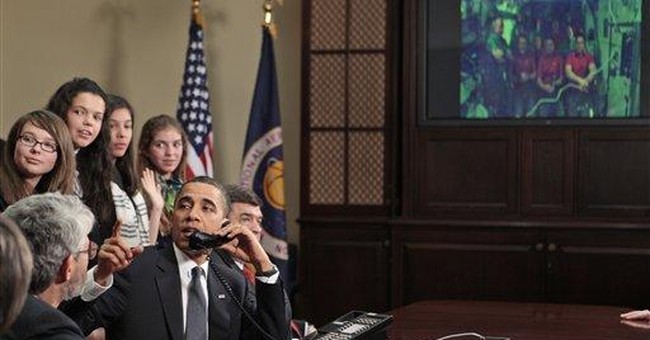 WASHINGTON -- In the latter days of the Carter presidency, it became fashionable to say that the office had become unmanageable and was simply too big for one man. Some suggested a single, six-year presidential term. The president's own White House counsel suggested abolishing the separation of powers and going to a more parliamentary system of unitary executive control. America had become ungovernable.

Then came Ronald Reagan, and all that chatter disappeared.

The tyranny of entitlements? Reagan collaborated with Tip O'Neill, the legendary Democratic House speaker, to establish the Alan Greenspan commission that kept Social Security solvent for a quarter-century.

A corrupted system of taxation? Reagan worked with liberal Democrat Bill Bradley to craft a legislative miracle: tax reform that eliminated dozens of loopholes and slashed rates across the board -- and fueled two decades of economic growth.

Later, a highly skilled Democratic president, Bill Clinton, successfully tackled another supposedly intractable problem: the culture of intergenerational dependency. He collaborated with another House speaker, Newt Gingrich, to produce the single most successful social reform of our time, the abolition of welfare as an entitlement.

It turned out that the country's problems were not problems of structure but of leadership. Reagan and Clinton had it. Carter didn't. Under a president with extensive executive experience, good political skills and an ideological compass in tune with the public, the country was indeed governable.

It's 2010 and the first-year agenda of a popular and promising young president has gone down in flames. Barack Obama's two signature initiatives -- cap-and-trade and health care reform -- lie in ruins.

Desperate to explain away this scandalous state of affairs, liberal apologists haul out the old reliable from the Carter years: "America the Ungovernable." So declared Newsweek. "Is America Ungovernable?" coyly asked The New Republic. Guess the answer.

The rage at the machine has produced the usual litany of systemic explanations. Special interests are too powerful. The Senate filibuster stymies social progress. A burdensome constitutional order prevents innovation. If only we could be more like China, pines Tom Friedman, waxing poetic about the efficiency of the Chinese authoritarian model, while America flails about under its "two parties ... with their duel-to-the-death paralysis." The better thinkers, bewildered and furious that their president has not gotten his way, have developed a sudden disdain for our inherently incremental constitutional system.

And then, of course, there's the filibuster, the newest liberal bete noire. "Don't blame Mr. Obama," writes Paul Krugman of the president's failures. "Blame our political culture instead. ... And blame the filibuster, under which 41 senators can make the country ungovernable."

Ungovernable, once again. Of course, just yesterday the same Paul Krugman was warning about "extremists" trying "to eliminate the filibuster" when Democrats used it systematically to block one Bush (43) judicial nomination after another. Back then, Democrats touted it as an indispensable check on overweening majority power. Well, it still is. Indeed, the Senate with its ponderous procedures and decentralized structure is serving precisely the function the Founders intended: as a brake on the passions of the House and a caution about precipitous transformative change.

Leave it to Mickey Kaus, a principled liberal who supports health care reform, to debunk these structural excuses: "Lots of intellectual effort now seems to be going into explaining Obama's (possible/likely/impending) health care failure as the inevitable product of larger historic and constitutional forces. ... But in this case there's a simpler explanation: Barack Obama's job was to sell a health care reform plan to American voters. He failed."

He failed because the utter implausibility of its central promise -- expanded coverage at lower cost -- led voters to conclude that it would lead ultimately to more government, more taxes and more debt. More broadly, the Democrats failed because, thinking the economic emergency would give them the political mandate and legislative window, they tried to impose a left-wing agenda on a center-right country. The people said no, expressing themselves first in spontaneous demonstrations, then in public opinion polls, then in elections -- Virginia, New Jersey and, most emphatically, Massachusetts.

That's not a structural defect. That's a textbook demonstration of popular will expressing itself -- despite the special interests -- through the existing structures. In other words, the system worked.