It's Your Country Too, Mr. President 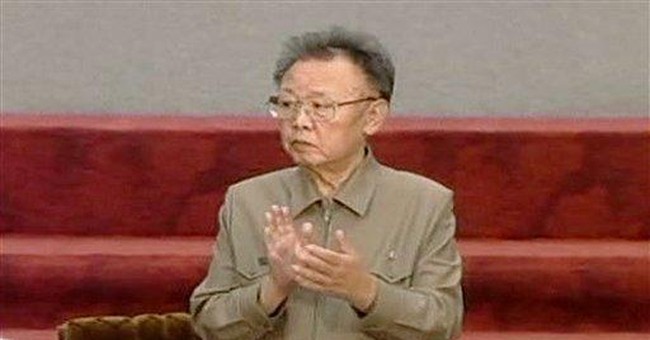 "Rules must be binding. Violations must be punished. Words must mean something. The world must stand together to prevent the spread of these weapons. Now is the time for a strong international response."

A more fatuous presidential call to arms is hard to conceive. What "strong international response" did Obama muster to North Korea's brazen defiance of a Chapter 7 --"binding," as it were -- U.N. resolution prohibiting such a launch?

The obligatory emergency Security Council session produced nothing. No sanctions. No resolution. Not even a statement. China and Russia professed to find no violation whatsoever. They would not even permit a U.N. statement that dared express "concern," let alone condemnation.

Having thus bravely rallied the international community and summoned the U.N. -- a fiction and a farce, respectively -- what was Obama's further response? The very next day, his defense secretary announced drastic cuts in missile defense, including halting further deployment of Alaska-based interceptors designed precisely to shoot down North Korean ICBMs. Such is the "realism" Obama promised to restore to U.S. foreign policy.

He certainly has a vision. Rather than relying on America's unique technological edge in missile defenses to provide a measure of nuclear safety, Obama will instead boldly deploy the force of example. How? By committing his country to disarmament gestures -- such as, he promised his cheering acolytes in Prague, ratifying the Comprehensive Nuclear Test Ban Treaty.

Really, now. How does U.S. ratification of that treaty -- which America has, in any case, voluntarily abided by for 17 years -- cause North Korea to cease and desist, and cause Iran to turn nukes into plowshares?

Obama's other great enthusiasm is renewing disarmament talks with Russia. Good grief. Of all the useless sideshows. Cut each of our arsenals in half and both countries could still, in Churchill's immortal phrase, "make the rubble bounce."

There's little harm in engaging in talks about redundant nukes because there is nothing of consequence at stake. But Obama seems not even to understand that these talks are a gift to the Russians for whom a return to anachronistic Reagan-era START talks is a return to the glory of U.S.-Soviet summitry.

I'm not against gift-giving in international relations. But it would be nice to see some reciprocity. Obama was in a giving mood throughout Europe. While Gordon Brown was trying to make his American DVDs work and the queen was rocking to her new iPod, the rest of Europe was enjoying a more fulsome Obama gift.

Our president came bearing a basketful of mea culpas. With varying degrees of directness or obliqueness, Obama indicted his own people for arrogance, for dismissiveness and derisiveness, for genocide, for torture, for Hiroshima, for Guantanamo and for insufficient respect for the Muslim world.

And what did he get for this obsessive denigration of his own country? He wanted more NATO combat troops in Afghanistan to match the surge of 17,000 Americans. He was rudely rebuffed.

He wanted more stimulus spending from Europe. He got nothing.

From Russia, he got no help on Iran. From China, he got the blocking of any action on North Korea.

And what did he get for Guantanamo? France, pop. 64 million, will take one prisoner. One! (Sadly, he'll have to leave his swim buddy behind.) The Austrians said they would take none. As Interior Minister Maria Fekter explained with impeccable Germanic logic, if they're not dangerous, why not just keep them in America?

When Austria is mocking you, you're having a bad week. Yet who can blame Frau Fekter, considering the disdain Obama showed his own country while on foreign soil, acting the philosopher-king who hovers above the fray mediating between his renegade homeland and an otherwise warm and welcoming world?

After all, it was Obama, not some envious anti-American leader, who noted with satisfaction that a new financial order is being created today by 20 countries, rather than by "just Roosevelt and Churchill sitting in a room with a brandy." And then added: "But that's not the world we live in, and it shouldn't be the world that we live in."

It is passing strange for a world leader to celebrate his own country's decline. A few more such overseas tours, and Obama will have a lot more decline to celebrate.