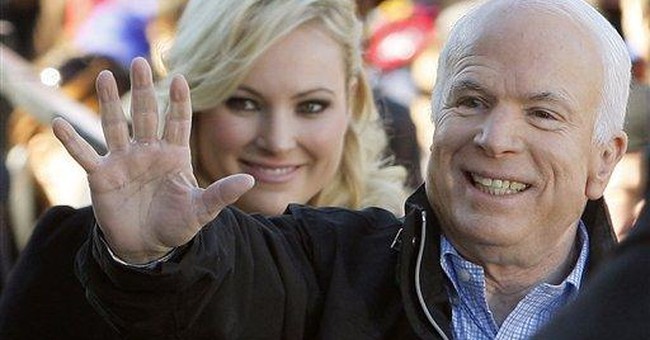 WASHINGTON -- Last week I made the open-and-shut case for John McCain: In a dangerous world entering an era of uncontrolled nuclear proliferation, the choice between the most prepared foreign policy candidate in memory vs. a novice with zero experience and the wobbliest one-world instincts is not a close call.

But it's all about economics and kitchen-table issues, we are told. OK. Start with economics.

Neither candidate has particularly deep economic knowledge or finely honed economic instincts. Neither has any clear idea exactly what to do in the current financial meltdown. Hell, neither does anyone else, including the best economic minds in the world, from Henry Paulson to the head of the European Central Bank. Yet they have muddled through with some success.

Both McCain and Barack Obama have assembled fine economic teams that may differ on the details of their plans but have reasonable approaches to managing the crisis. So forget the hype. Neither candidate has an advantage on this issue.

On other domestic issues, McCain is just the kind of moderate conservative that the Washington/media establishment once loved -- the champion of myriad conservative heresies that made him a burr in the side of congressional Republicans and George W. Bush. But now that he is standing in the way of an audacity-of-hope Democratic restoration, erstwhile friends recoil from McCain on the pretense that he has suddenly become right wing.

Self-serving rubbish. McCain is who he always was. Generally speaking, he sees government as a Rooseveltian counterweight (Teddy with a touch of Franklin) to the various malefactors of wealth and power. He wants government to tackle large looming liabilities such as Social Security and Medicare. He wants to free up health insurance by beginning to sever its debilitating connection to employment -- a ruinous accident of history (arising from World War II wage and price controls) that increases the terror of job loss, inhibits labor mobility and saddles American industry with costs that are driving it (see: Detroit) into insolvency. And he supports lower corporate and marginal tax rates to encourage entrepreneurship and job creation.

An eclectic, moderate, generally centrist agenda in a guy almost congenitally given to bipartisanship.

Obama, on the other hand, talks less and less about bipartisanship, his calling card during his earlier messianic stage. He does not need to. If he wins, he will have large Democratic majorities in both houses. And unlike 1992, Obama is no Clinton centrist.

What will you get?

(1) Card check, meaning the abolition of the secret ballot in the certification of unions in the workplace. Large men will come to your house at night and ask you to sign a card supporting a union. You will sign.

(3) Judges who go beyond even the constitutional creativity we expect from Democratic appointees. Judges chosen according to Obama's publicly declared criterion: "empathy" for the "poor or African-American or gay or disabled or old" -- in a legal system historically predicated on the idea of justice entirely blind to one's station in life.

(4) An unprecedented expansion of government power. Yes, I know. It has already happened. A conservative government has already partially nationalized the mortgage industry, the insurance industry and nine of the largest U.S. banks.

This is all generally swallowed because everyone understands that the current crisis demands extraordinary measures. The difference is that conservatives are instinctively inclined to make such measures temporary. Whereas an Obama-Pelosi-Reid-Barney Frank administration will find irresistible the temptation to use the tools inherited -- $700 billion of largely uncontrolled spending -- as a once-in-a-lifetime opportunity to radically remake the American economy and social compact.

This is not socialism. This is not the end of the world. It would, however, be a decidedly leftward move on the order of Lyndon Johnson's Great Society. The alternative is a McCain administration with a moderate conservative presiding over a divided government and generally inclined to resist a European social-democratic model of economic and social regulation featuring, for example, wealth-distributing growth-killing marginal tax rates.

The national security choice in this election is no contest. The domestic policy choice is more equivocal because it is ideological. McCain is the quintessential center-right candidate. Yet the quintessential center-right country is poised to reject him. The hunger for anti-Republican catharsis and the blinding promise of Obamian hope are simply too strong. The reckoning comes in the morning.