Time To Get Serious With Russia 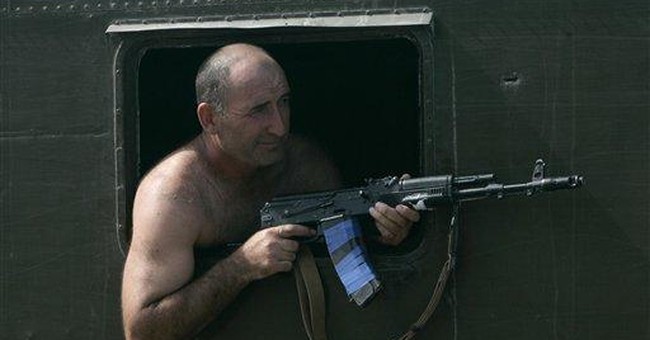 WASHINGTON -- The Russia-Georgia cease-fire brokered by France's president is less than meets the eye. Its terms keep moving as the Russian army keeps moving. Russia has since occupied Gori (appropriately, Stalin's birthplace), effectively cutting Georgia in two. The road to the capital, Tbilisi, is open, but apparently Prime Minister Vladimir Putin has temporarily chosen to seek his objectives through military pressure and Western acquiescence rather than by naked occupation.

The real objective is the Finlandization of Georgia through the removal of President Mikheil Saakashvili and his replacement by a Russian puppet.

Which explains Putin stopping the Russian army (for now) short of Tbilisi. What everyone overlooks in the cease-fire terms is that all future steps -- troop withdrawals, territorial arrangements, peacekeeping forces -- will have to be negotiated between Russia and Georgia. But Russia says it will not talk to Saakashvili. Thus regime change becomes the first requirement for any movement on any front. This will be Putin's refrain in the coming days. He is counting on Europe to pressure Saakashvili to resign and/or flee to "give peace a chance."

The Finlandization of Georgia would give Russia control of the Baku-Tbilisi-Ceyhan pipeline, which is the only significant European-bound route for Caspian Sea oil and gas that does not go through Russia. Pipelines are the economic lifelines of such former Soviet republics as Kazakhstan and Azerbaijan that live off energy exports. Moscow would become master of the Caspian basin.

Subduing Georgia has an additional effect. It warns Russia's former Baltic and East European satellites what happens if you get too close to the West. It is the first step to re-establishing Russian hegemony in the region.

What is to be done? Let's be real. There's nothing to be done militarily. What we can do is alter Putin's cost-benefit calculations.

We are not without resources. There are a range of measures to be deployed if Russia does not live up to its cease-fire commitments:

1. Suspend the NATO-Russia Council established in 2002 to help bring Russia closer to the West. Make clear that dissolution will follow suspension. The council gives Russia a seat at the NATO table. Message: Invading neighboring democracies forfeits the seat.

3. Dissolve the G-8. Putin's dictatorial presence long made it a farce but no one wanted to upset the bear by expelling it. No need to. The seven democracies simply withdraw. Then immediately announce the reconstitution of the original G-7.

4. Announce a U.S.-European boycott of the 2014 Winter Olympics at Sochi. To do otherwise would be obscene. Sochi is 15 miles from Abkhazia, the other Georgian province just invaded by Russia. The Games will become a riveting contest between the Russian, Belarusian and Jamaican bobsled teams.

All of these steps (except dissolution of the G-8, which should be irreversible) would be subject to reconsideration depending upon Russian action -- most importantly and minimally, its withdrawal of troops from Georgia proper to South Ossetia and Abkhazia.

The most crucial and unconditional measure, however, is this: Reaffirm support for the Saakashvili government and declare that its removal by the Russians would lead to recognition of a government-in-exile. This would instantly be understood as providing us the legal basis for supplying and supporting a Georgian resistance to any Russian-installed regime.

President Bush could cash in on his close personal relationship with Putin by sending him a copy of the highly entertaining (and highly fictionalized) film "Charlie Wilson's War" to remind Vlad of our capacity to make Russia bleed. Putin would need no reminders of the Georgians' capacity and long history of doing likewise to invaders.

President Bush needs to make up for his mini-Katrina moment when he lingered in Beijing yukking it up with our beach volleyball team while Putin flew to North Ossetia to direct the invasion of a neighboring country. Bush is dispatching Secretary of State Condoleezza Rice to France and Georgia. Not a moment too soon. Her task must be to present these sanctions, get European agreement on as many as possible and begin imposing them, calibrated to Russian behavior. And most important of all, to prevent any Euro-wobbliness on the survival of Georgia's democratically elected government.

We have cards. We should play them. Much is at stake.