The Democrat Plan for Losing 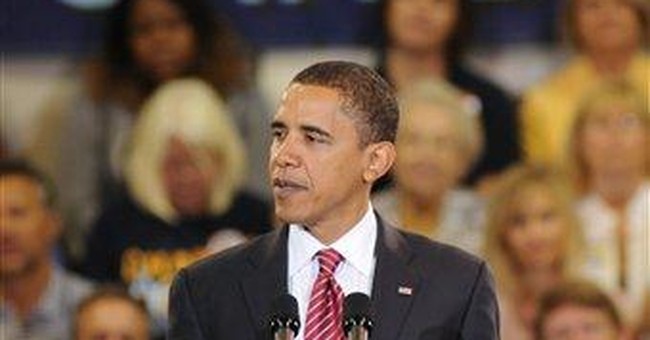 WASHINGTON -- Let's see: housing meltdown, credit crunch, oil shock not seen since the 1970s. The economy is slowing, unemployment growing and inflation increasing. It's the sixth year of a highly unpopular war and the president's approval rating is at 30 percent.

The Italian Communist Party could win this election. The American Democratic Party is trying its best to lose it.

Democrats have the advantage on just about every domestic issue from health care to education. However, Americans' greatest concern is the economy, and their greatest economic concern is energy (by a significant margin: 37 percent to 21 percent for inflation). Yet Democrats have gratuitously forfeited the issue of increased drilling for domestic oil and gas. By an overwhelming margin of 2-1, Americans want to lift the moratorium preventing drilling on the Outer Continental Shelf, thus unlocking vast energy resources shut down for the last 27 years.

Democrats have been adamantly opposed. They say that we cannot drill our way out of the oil crisis. Of course not. But it is equally obvious that we cannot solar or wind or biomass our way out. Does this mean that because any one measure cannot solve a problem, it needs to be rejected?

Barack Obama remains opposed to new offshore drilling (although he now says he would accept a highly restricted version as part of a comprehensive package). Just last week, he claimed that if only Americans would inflate their tires properly and get regular tune-ups, "we could save all the oil that they're talking about getting off drilling."

This is bizarre. By any reasonable calculation of annual tire-inflation and tune-up savings, the Outer Continental Shelf holds nearly a hundred times as much oil. As for oil shale, also under federal moratorium, after a thousand years of driving with Obama-inflated tires and Obama-tuned engines, we would still have saved only one-fifth the oil shale available in the United States.

But forget the math. Why is this issue either/or? Who's against properly inflated tires? Let's start a national campaign, Cuban-style, with giant venceremos posters lining the highways. ("Inflate your tires. Victory or death!") Why must there be a choice between encouraging conservation and increasing supply? The logical answer is obvious: Do both.

Do everything. Wind and solar. A tire gauge in every mailbox. Hell, a team of oxen for every family (to pull their gasoline-drained SUVs). The consensus in the country, logically unassailable and politically unbeatable, is to do everything possible to both increase supply and reduce demand, because we have a problem that's been killing our economy and threatening our national security. And no one measure is sufficient.

The green fuels the Democrats insist we should be investing in are as yet uneconomical, speculative technologies, still far more expensive than extracted oil and natural gas. We could be decades away. And our economy is teetering. Why would you not drill to provide a steady supply of proven fuels for the next few decades as we make the huge technological and economic transition to renewable energy?

Congressional Democrats demand instead a clampdown on "speculators." The Democrats proposed this a month ago. In the meantime, "speculators" have driven the price down by $25 a barrel. Still want to stop them? In what universe do traders only bet on the price going up?

On Monday, Obama outlined a major plan with mandates and immense government investment in such things as electric cars and renewables. Fine, let's throw a few tens of billions at this and see what sticks. But success will not just require huge amounts of money. It will require equally huge amounts of time and luck.

On the other hand, drilling requires no government program, no newly created bureaucracy, no pie-in-the-sky technologies that no one has yet invented. It requires only one thing, only one act. Lift the moratorium. Private industry will do the rest. And far from draining the treasury, it will replenish it with direct taxes, and with the indirect taxes from the thousands of non-subsidized new jobs created.

The problem for the Democrats is that the argument for "do everything" is not rocket science. It is common sense. Which is why House Speaker Nancy Pelosi, surveying the political rubble resulting from her insistence on not even permitting drilling to come to a floor vote, has quietly told her members that they can save their skins and vote for drilling when the pre-election Congress convenes next month. Pelosi says she wants to save the planet. Apparently saving her speakership comes first.