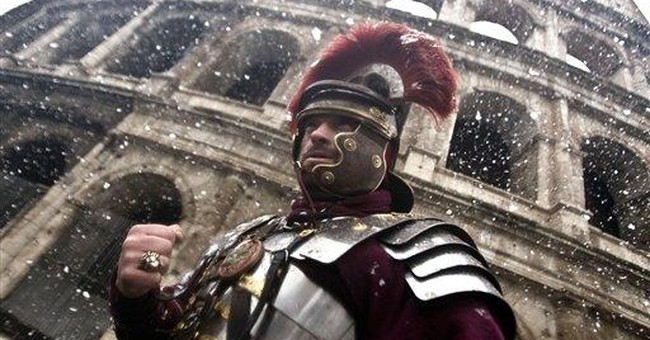 Last week, Ann Coulter got some liberal panties in a twist when she pointed out the reality that unlike American sports like football, baseball, basketball, and hockey (what’s yours is ours, Canada), soccer is a sport for whiny, collectivist, European pansies.

And of course, like usual, she was right. But I’d argue that the column was, in reality, a very rare instance of moderation for the queen of conservative commentary.

Sure, soccer is a boring sport for timid, risk-averse poindexters who are afraid to stand out from the crowd.

But there’s actually only one sport worthy of any fealty to or appreciation from a country as ferocious, atomistic, take-no-prisoners, unafraid, and straight-out-will-kill-you-in-a-second as the good-old US of A: The Games.

America’s Founding Fathers described their project as the new Rome. And the only sport appropriate for the new Rome is the one popular in the old one. That’s right. Americans shouldn’t be crowded into stadiums to watch balls go back and forth. We should be seeing the heads of mace-wielding gladiators roll across the field and fly through the air!

Maybe it’s not, as Coulter said, a stroll on beach to be on ice with a puck flying around at 100 miles per hour. But that’s an absolute picnic compared to replacing that flying puck with a javelin.

Coulter is upset that soccer is so physically undemanding that it’s often played co-ed. Imagine how many girls are going to line up to enter the gladiator ring.

Look, football, baseball, basketball, and hockey may have more opportunities for individual players to shine. But in the games, fading into the background or playing backup isn’t an option. America is a nation of individuals fighting other individuals for our piece of the pie, baby. We deserve a sport featuring nothing less than gladiators fighting to the death to get theirs.

Coulter paints football as the appropriately violent alternative to the you-might-get-kicked-in-the-shins soccer. And sure, sometimes football players do get taken off the field in a stretcher. Plus, all those head injuries often show up in former players wandering around lost and acting super weird decades later. But football is straight prancing through a field of daisies in a paisley sundress compared with the games.

And if scoreless ties are your worry, the Games is your sport. No one leaves without scoring.

As Coulter points out, most sports are sublimated warfare. That’s what makes the Games so amazing, there’s no sublimation needed. Americans are clearly a war-hungry bunch. Let’s get that impulse out on the field, it’s a lot cheaper than invading, maintaining, and then re-invading countries that exist on the other side of the world and which have never not been at war with someone, somewhere.

It’s weird, Ann Coulter has never been one to shy away from saying exactly what she thinks. I’m guessing reinstating the Games just never occurred to her. But I think we can both agree that it’s time. First round? Ann Coulter vs Rachel Maddow. Fight!