How to Save the Republic: Throw the Bums Out! 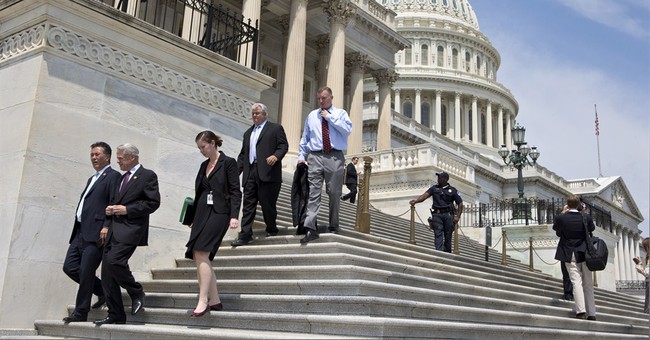 Reason’s irascible Nick Gillespie has summed up what’s wrong with our political system in one chart:

Apparently everyone hates Congress, but no one hates their congressperson. I’m here to tell you that, contrary to what you may believe, your Congresscritter sucks too!

Congress just watered down a bill that would start to begin the process of maybe thinking about re-establishing our Fourth Amendment rights. Guess we don’t need those after all. But aside from our eroding civil liberties, the economic situation is even more dire. There’s a reason only 28 percent of Americans think the country is moving in the right direction.

Here’s the problem. Our elected officials have been writing checks to voters without the cash to back them up. We’re out of money, but Social Security and Medicare costs just keep rising and rising.

This state of affairs is entirely predictable. In fact, the founding fathers predicted something very similar in the Federalist Papers. The fact of the matter is that American government as set up according to the Constitution was far less democratic than it is now. There was no direct election of Presidents. The people didn’t even elect their Senators or Representatives. Instead, we had what could most accurately be called a Representative Republic, where the (land-owning, white, male) people elected state Representatives, who elected federal Senators and Representatives.

This wasn’t an accident. The reasoning was laid out clearly in Federalist Number 10. In it, James Madison explains that democracy enables the majority to vote away the property of the minority. He feared a large majority of relatively poor people voting to levy a heavy progressive tax on the rich.

That hasn’t really happened. While the rich do pay a larger share of their salaries in income taxes, the uber-rich have figured out how to get out of paying the vast majority of their taxes. Really, progressive taxation just squeezes the middle-class.

What has happened is actually far worse. Entitlement programs like Social Security and Medicare are, essentially, wealth transfers of the kind that worried Madison. But they’re actually more vile than he anticipated, because instead of transferring money from the rich to the poor, they transfer money from the young and relatively poor to the old and relatively wealthy.

Why is this worse? Well, the problem with wealth transfers, besides the immorality of taking someone’s hard-earned money, is that they thwart wealth creation. Entrepreneurs and investors use their wealth to innovate, making them wealthier, while also raising standards of living for everyone. Taking their money from them takes money out of that process, slowing it down. James Madison knew this, and that’s why excessive direct democracy scared him.

Now, today’s young people aren’t all entrepreneurs and investors. But we are the future. Stealing a third of our income from us is stealing from the future of this country. Contrary to what many people think, and Congress wants you to believe, Social Security and Medicare aren’t funded by the taxes its recipients paid while they were working. That money is long gone, spent on other programs, which is why they’re broke.

Nope, Social Security and Medicare are funded by the payroll tax. This tax takes 30% of the first and every dollar every working person earns. Those dollars, plus the up huge bills Congress is racking up for entitlement programs, are dollars we Millennials are not able to invest in ourselves. We’re not building businesses, getting new skills, or saving for our futures, because we’re paying for programs which will be bankrupt long before we need them.

Why is this allowed to happen? Because thanks to the baby boom, old people outnumber young people. And because they have money on the line today in the form of their entitlement checks, they are motivated to vote. This is democracy in action: The majority stealing from the minority.

Stunning: Dan Bongino Reveals FBI 302 from May 2017; FBI Team Tells Rod Rosenstein the President Is NOT a Suspect
Redstate
Turley: Dems have more than 150 million ways to sound stupid on gun issues, you know
Hotair