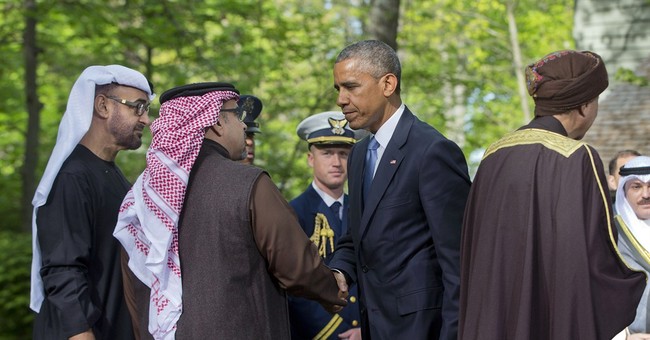 The Saudis are in play, casting about for partners.

In a clear vote of no-confidence in US President Barack Obama’s leadership, Saudi King Salman led several Arab leaders in blowing off Obama’s Camp David summit this week. The summit was meant to compensate the Sunni Arabs for Obama’s nuclear deal with Iran.

Salman’s decision is further proof that US-Saudi relations have jumped the tracks. For 70 years the Saudis subcontracted their national security to the US military. Deals were closed with a wink and a nod. That’s all over now.
Obama has destroyed Washington’s credibility. Salman views its gentleman’s agreements as worthless. All he wants now is military hardware. And for that, he can send a stand-in.

The Saudis never put all their eggs in America’s basket. For 70 years the Saudis played a double game, maintaining strategic alliances both with the liberal West and the most reactionary forces in the Islamic world. The Saudis pocketed petrodollars from America and Europe and transferred them to terrorists and jihadist preachers in mosques in the US, Europe and worldwide.

And so, since the Arab revolutionary wave began in late 2010, the Saudis opposed the empowerment of the Muslim Brotherhood. The Saudis are the primary bankrollers of Egyptian President Abdel Fatah al-Sisi’s regime.
During Operation Protective Edge last summer, the Saudis sided with Sisi and Israel against Hamas, the Palestinian branch of the Muslim Brotherhood, and its Turkish and Qatari state sponsors. Although Saudi Arabia had previously been a major funder of Hamas, that backing ended in 2005 when, following Israel’s withdrawal from Gaza, Hamas forged strategic ties with Iran.

For the past five years, the Saudis worked against both the Muslim Brotherhood and Iran. But in recent months they began reconsidering their two-war approach.

With the Iranian-backed Houthis’ takeover of Yemen and the US’s conclusion of its framework nuclear deal with Iran, the Saudis apparently determined that weakening Iran takes precedence over fighting the Brotherhood. With its Houthi proxies in Yemen deployed along the Saudi border abutting Shi’ite-majority border provinces, and fighting for control over the Bab el Mandab, Iran now poses an immediate and existential threat to Saudi Arabia.

Moreover, as the Saudis see it, the threat posed by the Brotherhood has severely diminished since Sisi began his campaign to destroy its infrastructure in Egypt. So long as Sisi continues weakening the Brotherhood in Egypt and Libya, the Saudis feel safe working with the Brotherhood and its state sponsors Turkey and Qatar in Syria and Yemen. To this end, much to Washington’s dismay, the Saudis are willing to back a consortium of rebel groups in Syria that include the al-Qaida-linked Jabhat al-Nusra.

The Muslim Brotherhood and its terrorist offshoots are not the only strange bedfellows the Saudis are willing to work with in their bid to neutralize Iran.

They have also signaled a willingness to work with Israel.

While Israel should be willing to reciprocate Saudi overtures, there are institutional impediments to constructive cooperation.

For more than 20 years, Israel’s policy-making community has been intellectually ensnared by the notion of peace. As a consequence, the concept of joint action based on shared interests has become almost incomprehensible.
Many senior officials believe that the only way for Israel to collaborate with its Arab neighbors is by first signing a peace treaty with the Palestinians. So long as such a peace treaty eludes us, no real cooperation is possible.
This is the why Labor head “Buji” Herzog and Yesh Atid leader Yair Lapid responded to the stunning support Israel received from Egypt, Saudi Arabia and the UAE during Operation Protective Edge, not with a simple nod and smile, but with the idea that what we all need to do to follow up with a regional peace conference where the Egyptians, Saudis and the UAE could join the West in condemning Israel for failing to cough up Jerusalem.

The problem is that the security establishment is committed to the notion that Israel’s international position is a function of the state of our relations with the Palestinians. If we appease the Palestinians, then people will develop ties with us. If not, they will blackball us.

This week, Dr. Mark Heller, a principal research associate at the Institute for National Security Studies, gave expression to this popular assessment in an article he published on the institute’s website. Heller claimed that while it is true that Israel and regional actors, including Saudi Arabia, share interests, and it is possible that due to those joint interests “potential may exist for expanded ties,” nothing significant can come from those ties so long as Israel refuses to appease the Palestinians.

In his words, “Those [who reject making such concessions to the Palestinians] should at least refrain from indulging in the fantasy that Israeli involvement in a regional response to Israel’s challenges – the Iranian threat, Islamist radicalism, American fecklessness, or anything else – is a substitute for movement on the Palestinian issue rather than a consequence of it.”

Not only is this thinking wrong, given the chaos in so much of the Arab world today, it is dangerous. With all the Arab regimes teetering on the edge or seriously threatened by rising jihadist forces, talk of peace treaties, overt ties and normalized relations between Israel and its neighbors is not merely irrelevant, it is dangerous. Going public with ties to Israel could endanger regimes maintaining them.

The greater the expanse of our joint efforts, the greater the threat of blowback. On the other hand, if limited joint operations are successful, then the bilateral impetus for future cooperation will grow.
As to the Palestinians, suffice it to note that the agenda for Obama’s summit with the representatives of the Gulf Cooperation Council made no mention of the Palestinians.

If the Palestinians did arise as an issue at Obama’s summit this week, it was because the Americans raised it. The Arabs, for their part, undoubtedly then responded by cluckingtheir tongues and denouncing Israel in unison for a bit. Then they cleared their throats and moved on to a subject that interests them.

And this brings us back to the Israeli diplomatic-security brass and their antiquated notions about what makes our Arab neighbors tick.

Israel today is confronted by two strategic threats that have little to nothing to do with each other. On the one hand we have Iran. On the other hand we have the international campaign to delegitimize Israel’s right to exist.
Iran is a regional threat.

The threat of delegitimization emanates mainly from Western countries acting hand in glove with the PLO. What we learn from arguments like Heller’s is that many in the top echelons of our diplomatic-security community view them as interconnected.

This is a problem, because treating them as such only makes things worse.

Iran is principally a physical threat. The center of gravity of any strategy for contending with Iran involves physically blocking Iran’s territorial advance in the region and its acquisition of nuclear bombs.

Cooperation between Israel and the Gulf states would consequently take place on the ground, far away from television cameras. The public dimension of a strategy of blocking Iran’s regional and nuclear advances – continuously sounding the alarm regarding the threat Iran poses to international security – is not an end unto itself. The purpose of these warnings is develop the political maneuver room to enable actions on the ground.

In contrast, a coherent strategy for combating the delegitimization threat requires Israel to act almost entirely above ground. To defeat the manifold forces seeking to cast Israel out of the community of nations, Israel must expose and discredit the goals of the campaign, the political forces leading it and their sources of finance.

The problem is that in order to adopt a competent strategy for countering the delegitimization campaign, Israel’s senior officials first need to understand what is happening. And here the Palestinians are relevant to the discussion.
Ever since the UN’s diplomatic pogrom at Durban, South Africa, in August 2001, just a year after the peace process blew up at Camp David, the Palestinian conflict with Israel became part and parcel of a broad-based campaign to deny Israel’s legitimacy and right to exist.

For 14 years Israel has failed to forge coherent and successful policies for contending with this state of affairs because our senior officials refused to acknowledge what had happened and have instead insistently argued that the campaign against us is somehow related to a future peace with the PLO.

We saw just how absurd this view has become earlier this week when one of the principal PLO negotiators, the terrorist- turned-security boss-turned international soccer aficionado Jibril Rajoub, the current head of the Palestinian soccer federation, made real progress in his longstanding bid to get Israel expelled from FIFA.

Rajoub understands that any success he garners in his operation will have a cascade effect on the overall campaign to expel Israel from the community of nations. Rather than open a counteroffensive, based among other things on exposing Rajoub’s true nature – he is a man whose hands are anything but clean – and making him persona non grata in polite company, Israel chose instead to pretend he isn’t our enemy and to deal with this quietly.

The same officialdom that wrongly viewed Rajoub as a peace partner in the 1990s, cannot accept that he is our enemy, hell bent on using political warfare as a means of destroying Israel. The officialdom that still believes Israel’s legitimacy is tied to its ability to appease the PLO cannot understand that the PLO has no reason to exist outside the campaign to destroy Israel’s legitimacy.

The Iranian threat does share two features with the delegitimization campaign. Both threaten Israel’s existence, albeit in different ways. And both require strategic operations that contradict the central guidepost of Israeli strategic thinking for the past 20 years.

We don’t need open relations with the Arabs. We get more behind the scenes that we will ever receive in front of them.


And the Palestinians aren’t the key to good relations with the West. They are the justification for anti-Semitism.

We have the means to handle both threats. But doing so requires that we first put our long-held delusions behind us.